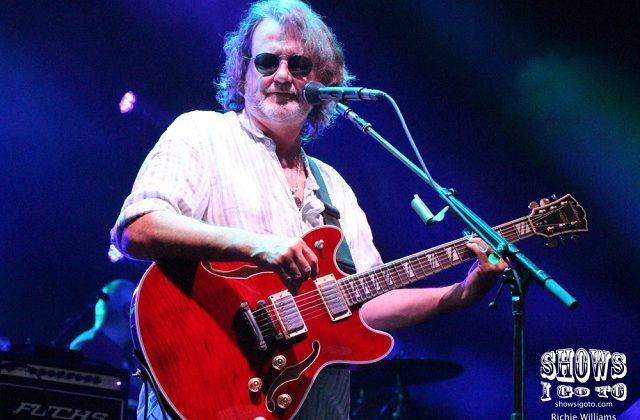 Stay calm and PANIC! It’s my first Shows I Go To review assignment!

Widespread Panic hosted a weekend party at St. Augustine Amphitheatre in Florida on Friday, September 23 and Saturday, September 24. Our adventure would only include Friday, but that would suffice. My concert buddy for the evening was the one and only SIGT photographer, Richie “The Sober Goat.”

The evening started with a rush out the door. Surprise, surprise, we’re running late to another show, hastily heading towards the amphitheater in St. Augustine from our home in Orlando. Fortunately, traffic was in our favor. As we approach the venue on the highway, Richie hops out of the car and starts speed walking to make his way inside and not miss the first three songs for photos. And me? I had to go find parking. The only issue here is the venue holds about 4,000 people — the show is sold out — and Richie currently doesn’t have a cell phone (thanks, Atlantic Ocean!). Here we go, let the adventure begin! So, Richie has hopped out of the car and I find parking almost immediately, giving me hope that I would find him shortly after. But the quarter mile long security check line had other plans. After waiting in the line for 10 minutes, a friendly face pointed me towards a shorter line and after another 10 minutes I was in! I only missed the first, “Hope In A Hopeless World”… so you’re sayin’ there’s a chance!? The next song “Glory” was perfect entrance music for me, instantly creating a blissful moment as soon as it touched my ears. There is an innate freedom you feel when your next few hours are set to tantalize and tickle your senses. Following on the setlist was “Worry,” an uptempo jam that featured vocalist/guitarist John “JB” Bell’s rustic voice and guitarist Jimmy Herring’s unlimited range and scope. After the first three songs, I knew Richie would be on the move migrating from the photo pit to secure his camera gear for the evening. So I begin the hunt for my friend. A little bit of festival searching experience has me calmly moving through the crowd to no avail. I needed to use the restroom and low and behold, Richie did too. LOL! After finding my friend and some new beers, we moved down next to the sound and light boards in the dead center of the crowd, best seat in the house. We had an excellent view for the rest of the first set. During set break, Richie and I finally met up with our other friends from Orlando that were at the show. After refueling with some more brews, the seven of us made our way to a nice spot for the second set. One great thing about a jam band show at a seated venue is that hardly anyone is in their assigned seat, and everyone is real friendly which makes moving around that much easier.

The second set began with a continuous three-song jam of “Postcard” > “Impossible” > “Slippin’ Into Darkness” which featured Panic tour manager Steve Lopez joining the band onstage to add some shaker to “Slippin’ Into Darkness.” The second set ended with the popular fan favorite “Chilly Water” which included a spacey “drums” jam. The boys of Widespread had a surprise in store for the encore as they brought out special guests and Florida residents, Derek Trucks and Susan Tedeschi. Oh wow! Two amazing musicians, one a child prodigy turned all-star guitarist (Derek); the other a soulful singer (Susan). Both showcased their guitars and vocals to “Good Morning Little Schoolgirl” and Joe Cocker’s “High Time We Went” to finish off the show. After being serenaded with the sweet sounds of her voice and his slide guitar, we walked out of the venue on cloud nine. Overall, the show was amazing and we couldn’t have had a better time. But wait … the night’s not over yet! Our fellow Orlando friends that we met up with were camping in Anastasia Park next to the venue for the weekend. After a beer at the campsite, we headed to a local venue, Planet Sarbez, to check out our favorite Orlando musicians: Leisure Chief and The Groove Orient. LC helped us cap off our night with their usual stellar funky jazz and jazzy funk, while TGO rocked us all night long. After all was said and done, we made it through another amazing night of music and friends.

Here’s a quick highlight video, courtesy of The Sober Goat. It starts with audio of “Chilly Water” set to a few photos, followed by clips of “Hope In A Hopeless World” and “Worry.”

Notes: *with Steve Lopez on shaker
^with Derek Trucks on guitar; Susan Tedeschi on guitar and vocals

Panic fans that were in attendance for the second show on Saturday night were treated to a very special performance as the band skipped a set break to deliver one massive set that was nearly three hours. Oohh weeee!