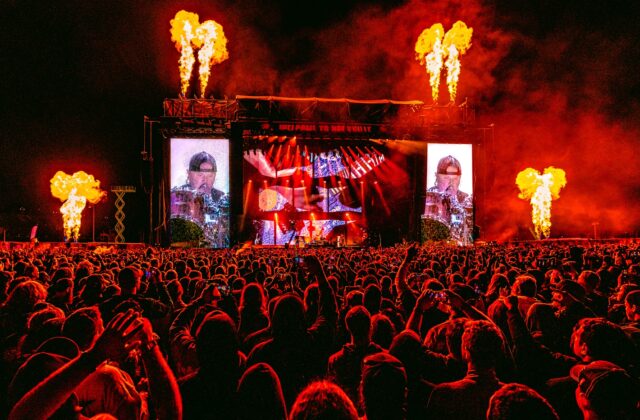 “Here, hold my stuff” shouts the girl standing next to me while shoving all her things into her brothers arms. She turns and has a group of large guys waiting to hoist her on top of the already pumped-up crowd. Squealing with delight, she surfs over the epic sea of people towards the heavy metal blasting from the speakers. She joins a dozen other rockers already floating toward the stage in an attempt to soak in every blissful moment of Welcome To Rockville ‘21! She returns a few minutes later with a huge smile on her face. “I made it all the way to the front!” I ask her, “what made you want to do that all of a sudden?”  To which she replies, “I just got fired! My boss canned me for telling them I’m going to stay for the rest of the festival! Gotta go big or go home!”

The tenth annual Welcome To Rockville is huge. I mean it’s spectacularly enormous! Graduating from a city festival in Jacksonville, WTR took a gigantic leap forward in 2021 hosted by the Daytona International Speedway. It is simply jaw dropping to see rock ‘n’ roll’s biggest acts on arguably the biggest stages I’ve ever seen! The stages are equipped with high definition video boards that scale the entire stage. Pair that with a support screen and sound way out in the middle next to the Ferris wheel and we have ourselves a party! Huge stages, Ferris wheel, and even a mechanical shark you can bull ride, this four day festival has it all! The endless infield of this world-famous speedway now houses the largest population of metal fans in the United States! 160,000+ people with black shirts and jeans, racing around with great costumes and makeup! This is a place where coloring outside of the lines is encouraged. Slipknot’s full body suits, Rob Zombie’s demented looking world, the crowd loves to dress up as much as the bands do! Oh yeah, did I mention? TWO NIGHTS OF METALLICA!!!

We were so happy to be able to produce and print the Official Commemorative Guide book this year.

Check the whole thing out below and grab a limited edition print copy HERE.

In anticipation of the 2022 lineup announcement, I give you SPENCER’S TOP FIVE Rockville 2021 sets:

Over the past two years, New York’s Brass Against has kept rock alive with searing covers of Rage Against the Machine, Tool, Audioslave, Black Sabbath, and many more. A rotating cast of musicians create spectacular versions of classic rock and heavy metal songs. This performance is no different as they cover “Bulls on Parade” by Rage and “Pot” by Tool. I am head banging with the best of them as I enjoy what feels like the best music I’ve seen all day. Lead singer, Sofia Urista, is dominating the stage with her vocal prowess and overall hotness. She emphatically dances to the music while the band crushes song after song. They simply let the music flow through them. After the set I was gushing to tell my friends about the awesome music at Brass Against. They were so pissed they missed it!

This French heavy metal band is so good. Nominated for a Grammy Award for their latest song “Amazonia,” these guys bring it. Their seventh studio album, Fortitude, was released to instant success, besting the pop and rap world to take number one on the billboard charts for album sales. Traveling across an ocean is no challenge for Gojira! They simply rise out of the water with thunderous pace and lasers for eyes! Tonight, their lights and video are so compelling. I’m mesmerized by the double bass drum and rapid guitar in the opener “Born For One Thing.” They play their top two songs on Spotify, “Stranded” and “Silvera,” both from the ‘16 Magma album. They finish out the set with “Amazonia” and “The Chant!” Whew! I need a brush and a mirror after rocking out so hard. You already know who they are. Fast, loud, thrashing speed metal. They’re best to ever do it. Period. Tonight, they have a massive crowd.  Fifty thousand people all eager to rage out with their favorite rock band.  Metallica open with “Whiplash,” before a massive “Ride the Lightning!” People around me sing every word and you can feel the electricity in the air. They play “Harvester of Sorrow” and after they seem to finish, lead singer James Hetfield antagonizes the crowd with a yawn before they drop into the reprise for the gigantic song. Suddenly flames, 10-15 feet high are shooting out of the front of the stage, casually pacing the front while they play the song. Flames and fireworks are everywhere during this set but no more present than when they play “One.” The explosions are met with applause as they perform the old  explosion charged favorite. Welcome to Rockville ‘21 is so badass that the stage has a sky cam! That’s right, like Monday Night Football. A camera, attached to cables, gliding above the band to get shots like you’ve never seen. Holy crap! Now I feel like I’m at a big show. I have never seen that before! Kirk Hammet spits fire with his incendiary guitar solo during “Fade To Black.”  I mean a lengthy blaze extends from his shoulder strapped flamethrower into the crowd and he melts the faces of everyone in the park. His scorching hot licks can’t help but heat things up in “Fight Fire With Fire.”  They finish the set with “Seek & Destroy” to the crowds delight!  So much fist pumping and head banging!  High fives and chest bumping ensue as they take their applause from the thunderous crowd.

Sunday’s Metallica set is the Black album played in reverse. They play the record in its entirety and they top it off with “Damage Inc.” and finish with “Creeping Death.” Welcome to Rockville 2021 Metallica by Ana Massard (courtesy of WTR)

The Offspring have been playing skater, punk rock for their fans since ‘84. Guitarist Kevin “Noodles” Wasserman has released ten studio albums with the band over the last 37 years. They play the title track from their latest album (February ‘21) Let the Bad Times Roll, as well as the first track on the album, “This Is Not Utopia.” But indeed I am in utopia and euphoria as they play hit after hit from my misspent-youth. “Original Prankster,” “Bad Habit,” “Come Out and Play,” and they close with “Self Esteem.” It’s worth mentioning that lead singer Dexter Holland absolutely kills with his piano makeover version of “Gone Away” released in ‘21. It’s somber message reminds me how special it is that we are all together right here at this moment. The Offspring by Steve Thrasher

Badflower understood the assignment. They slept very little and rocked very hard. After we spoke with them for the exclusive interview we put in the WTR guide book, I definitely didn’t want to miss their set. The dynamics they bring to the table as often unmatched. From soft, deep-cutting lyrics to chaotic loud choruses, Badflower knew how to deliver. The people around me (and our photographer) all seemed like they enjoyed what they heard. I hope we see a lot more of them in the future. Special thanks to everyone who stopped by the SIGT Tent! Welcome To Rockville 2021 Photos by Jeff Roach and Carolyn Dentz.