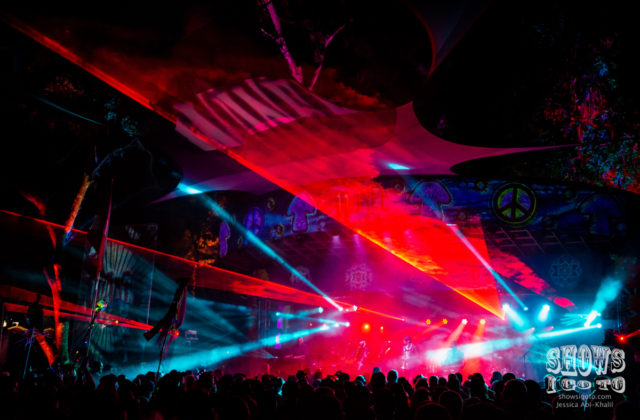 More than just a weekend of excellent music — Wanee Music Festival is a collection of our greatest memories and childhood shenanigans.

Wanee is … passing by a “Sax-squatch” on your way to the next set.

Wanee is … your buddy constantly falling asleep in chairs at strangers camps.

Wanee is … your bassist friend staying up all night playing until his wife finally pulls the plug at nine a.m..

Patrons to this festival are here for the excellent music, but the main attraction for the weekend are all of the friends and their killer campsites. Although, 2 nights of Widespread Panic and Phil Lesh & Friends are enough to make a grown man jump for joy!

This year I brought along professional photographer and first time music festival goer, Jessica.  We packed up all of her gear and we were on our way to our first festival together — Wanee 2018!

We arrive to the festival and get our wristbands on Thursday early afternoon.  We enter the park and are on our way to having a good time!  We already have a spot up close to the entrance because of our very gracious friends.  They even have a hot water shower for us.  So stoked to show off my home to Jessica, we embark to our first music: Big Something.

I’ve seen these fellas play recently when they opened up for Umphrey’s McGee on their 4-night Florida Run.  They are so much fun!  They play to a full amphitheater and take the crowd for a journey with huge, lengthy solos from Jesse Hensley, the lead guitarist.  These guys put on a solid show and close out the set with a Black Sabbath cover: “Sweet Leaf.” Up next is Wanee alumni: Dumpstafunk.  Only this time we have been promised a set of funk featuring the styling of Red Hot Chili Peppers from their 1991 album Blood, Sugar, Sex, Magik.  About half way through their set, they flipped the switch and became RHCP.  They hit homeruns with “Suck My Kiss” and “Power of Equality.” 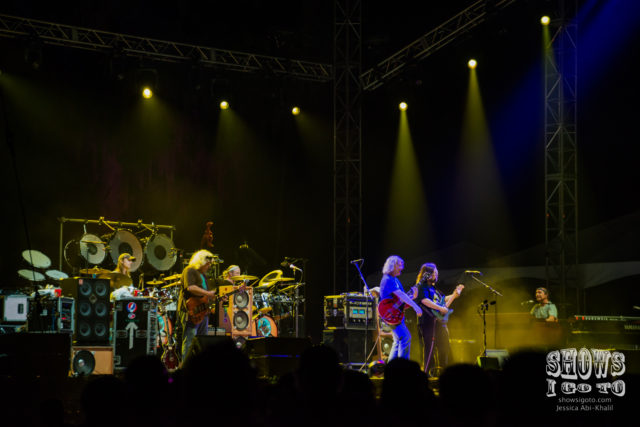 We go all out for Dark Star Orchestra, who perform music of the Grateful Dead. We enjoy four hours of Grateful Dead fun in the main field.  This set was a recreation of the Grateful Dead performance on May 8, 1977 at Barton Hall on the campus of Cornell University in Ithaca, New York.  Pink Talking Fish also performs covers, choosing songs by Pink Floyd, Talking Heads, Phish, and Allman Brothers Band. Pink Talking Fish is really the talk of the festival after their set.  They are so good at stitching songs together, weaving in and out of the most popular songs of your favorite jam bands. I mean seriously, “Psycho Killer > Dogs > Jessica > Dogs!”  What a segment!  I can’t leave out a special “Naive Melody” & “2001.”  Night one is so special, Friday and Saturday better bring it, today has been outstanding!

Friday morning comes before you know it.  The sun rises and I’m standing here feeling like its still last night.  We shower and eat, charging up for a gorgeous day in the Spirit of Suwanee Music Park.  We are having a splendid day in the woods and it gets even better as we make our way down to the amphitheater stage for Marcus King Band. 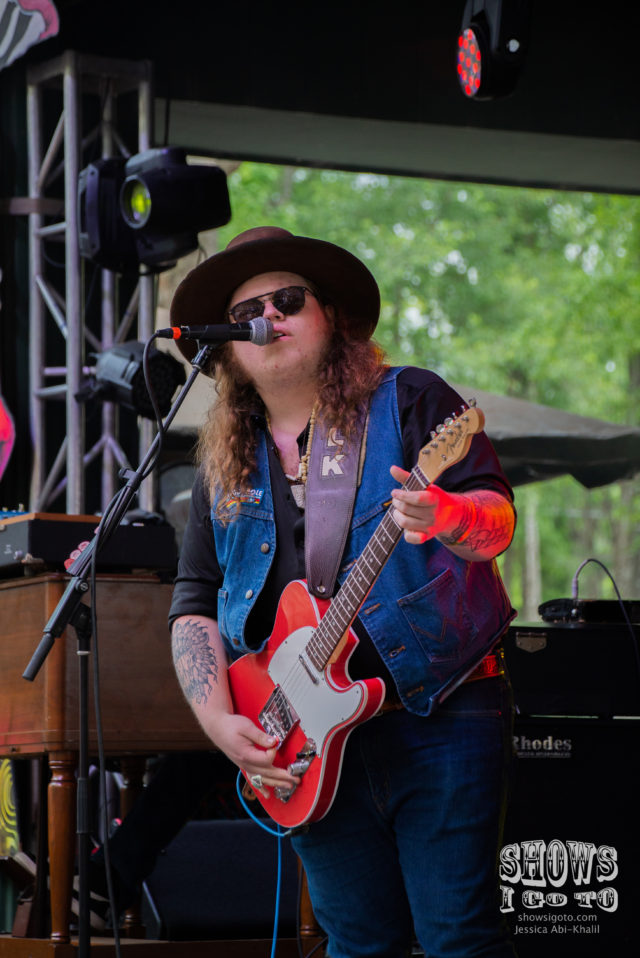 Marcus King is a young, blues guitarist from Greenville, SC.  Plain and simple, the guy can play guitar.  He noodles up and down the scales with ease, entertaining a throng of eager music fans.  A voice reminiscent of Warren Haynes and a distinctly bluesy sound makes Marcus a prime candidate to inherit the vacant throne that is Wanee Music Festival.  His set includes the Dead’s “Fire on the Mountain,” and Allman Brother’s “Dreams,” during which he has his father come on stage and sit in.  How cool!

A solid two hour set, that flew right by! This set is so good we need to take some time at camp to recover.  After recharging, we are right back at it in the amphitheater for Walter Trout’s incredibly bluesy set.  His fast pace is exactly what we are looking for, considering we are missing some of the much slower Phil Lesh & Friends.  Trout follows King’s lead and has a family member on stage.  He invites his son, John, to play guitar with him on his track “It’ll feel good for a min, but then it will hurt like hell.”  Just off in the distance I can hear Phil & Friends in the beginning of “Estimated Profit.” The Grateful Dead aren’t enough to pull me away from the Amphitheater stage because the boys from The Main Squeeze are up next.  They slay, every time.  They have this guitarist Max Newman, who is just the bees knees … 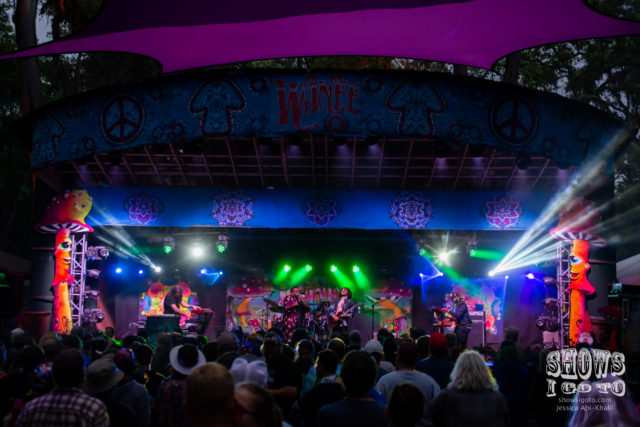 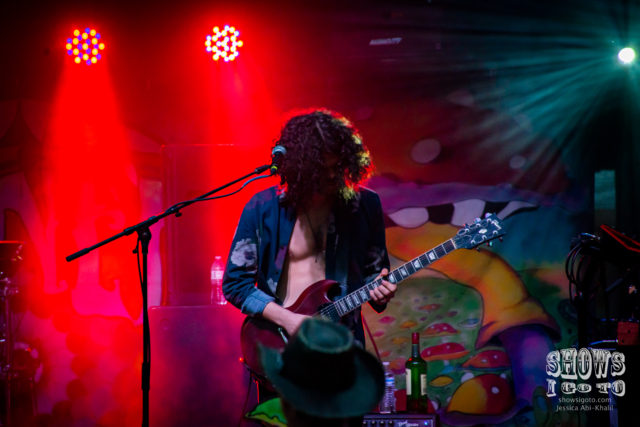 He is so strong technically, but he also is patient and thoughtful with is work.  He and the lead singer, Corey Frye, are a limitless tandem.  Recently they covered Michael Jackson’s “Rule the World,” and made it into a funky masterpiece.

This song was insanely good, and I can’t express the happiness on people’s faces as they rocked out to both a new and old song at the same time.  In their set, they include fan favorites “Dr. Funk” and “I’ll Take Another.”  This band is straight fire and if you get a chance to see them: do it.  A bathroom break later and we make our way to the main stage for Widespread Panic, the headliner of weekend.  And it is definitely Friday night: the field is popping off! 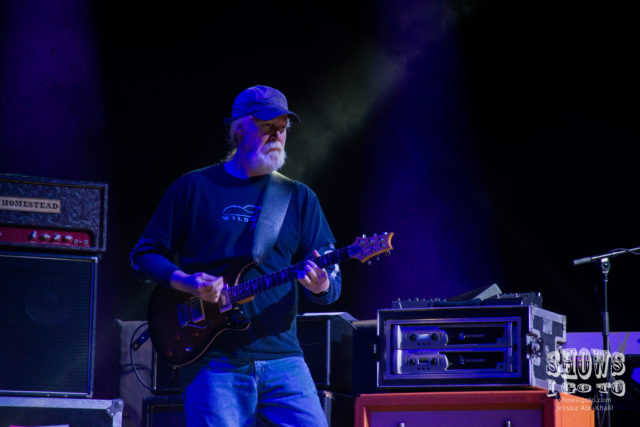 Lights from the stage mixed with hula hoops and poi make the scene enough for my wide-eyed companion to drop her jaw.  We make our way deep into the front of the crowd and for 3 hours we dance our butts off.  The band doesn’t even take a set break and we are on a 3 hour wild ride filled with Jimmy Herring’s screaming guitar, and JB’s squealing vocals.  The night was capped off with North Mississippi Allstars at the Amphitheater stage.  Tired from a long day we power on and venture into the dark night to find people up to no good.  We find some art, and push on to find a camp where people are spinning and spitting fire.  This seems a bit dangerous, but we are mesmerized by the tricks of this fire troupe. We try to get back to the tent before daylight, we just might get some sleep tonight.

Saturday is yet again a glorious day for weather.  A high of 70, overcast with a slight breeze?  Yes Please!  We make our way to the main stage for As the Crow Flies, a new project featuring Chris Robinson on vocals and Marcus King on guitar. 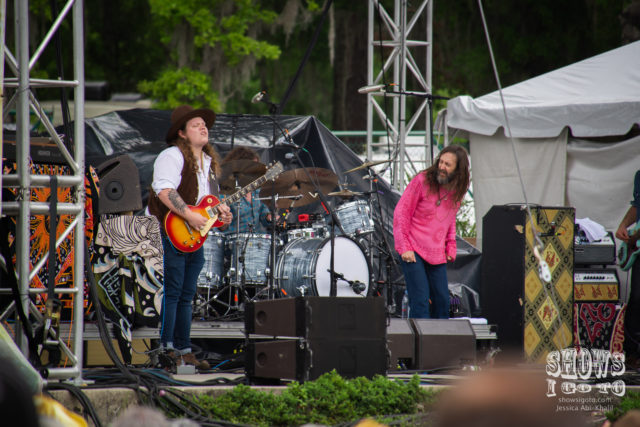 They are a solid choice for the afternoon, but just too slow.  We make our way to the other stage for one of my new favorite bands: Pigeons Playing Ping Pong. 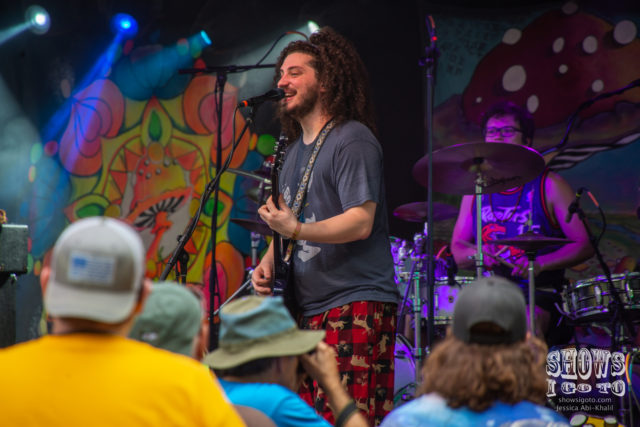 This funky four piece puts the “fun” in “funk.” Their set includes “Poseidon,” “Live it Up,” and a mashup roller coaster that kept the audience guessing as to which cover the band would fly into next!  (They landed on “Kashmir” by Led Zeppelin).  They also give a nod to James Brown with “I Feel Good.”  A jump-kick from the lead singer, Greg Ormont, sends us into a sick guitar solo by Jeremy Schon, when we land at their set’s big finish: “Melting Lights.” 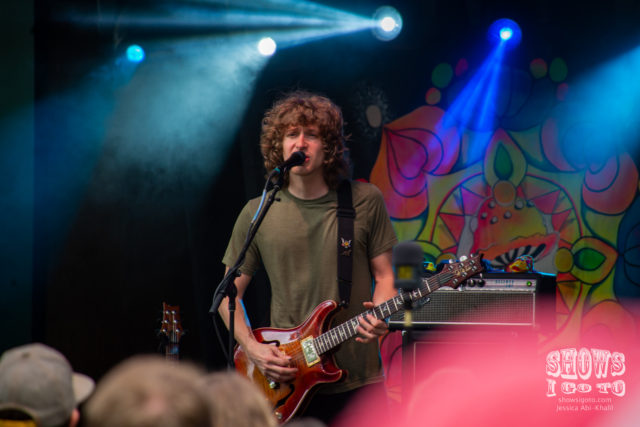 We have to make a stop a camp that keeps us from most of the George Porter set, but we did catch him playing sexy, smooth jams and growling into the mic. 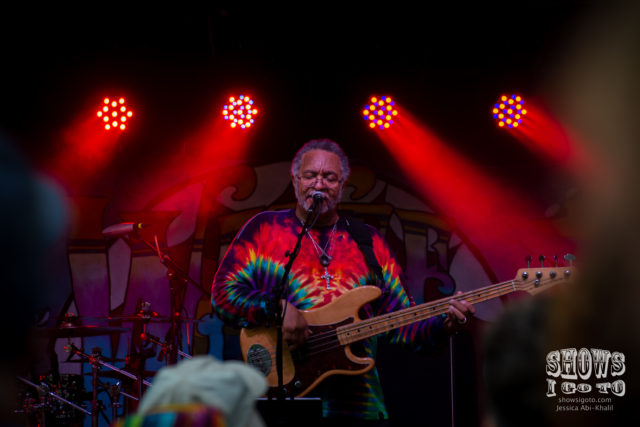 A “Sugaree” cover from him feels almost like he’s giving us permission to leave for Phil Lesh and Friends.  What a great move, we caught Marcus King sitting in for two songs: “West LA Fadeaway,” and “Sampson & Delilah.” 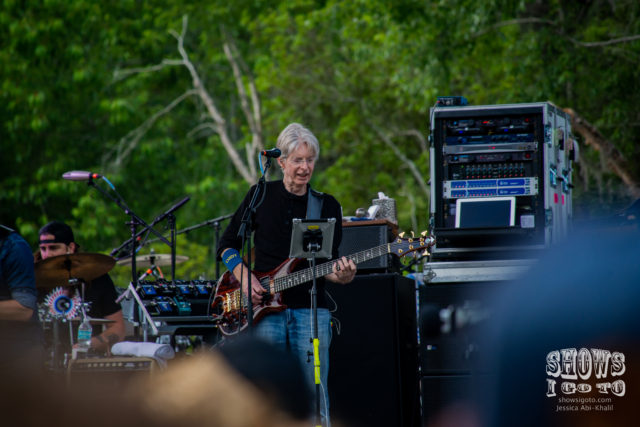 They play a great version of “Uncle John’s Band” that broke all the way down to just the crowd clapping before the band brought it back up to a big finish.  Jason Crosby is on keys and he kills it by being both aggressive and smooth during “China Cat Sunflower.”  The upbeat band also plays “St. Stephen,” with “Sweet Home Alabama,” and “Whole Lotta Love” teases.  They close out with a rare, upbeat, and electric “Ripple.”

Widespread Mother F*cking Panic is next and they aren’t messin’ around tonight! 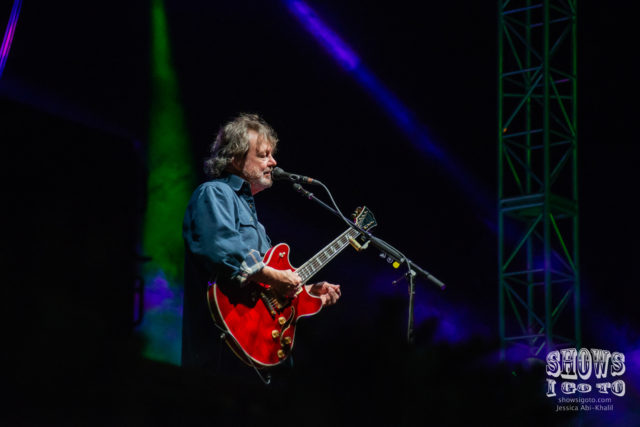 The beginning of the set features a lengthy “Child Radio,” as well as Jason Crosby sitting in on violin during “Second Skin.”  Panic’s guitarist Jimmy Herring and Crosby go back and forth as the band plays dramatically behind them. 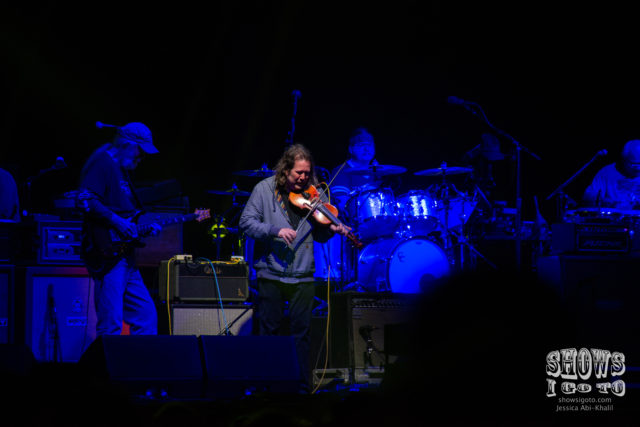 Widespread Panic delights the crowd once again by welcoming Marcus King to the stage.  He stays for “Bowlegged Woman, Knock Kneed Man,” as well as “See That My Grave is Kept Clean.” These guys are making the local fire marshal nervous as they inch ever so close to catching the stage on fire with their red-hot licks. 😎 They end their set with a killer take on “Papa’s Home,” and they close out with “Mr. Soul.”  These two sets by WP this weekend make me remember why I love this band.  They are so hype and fun, while still sticking to their southern and bluesy roots.

We leave the main field to make our way to the last set of the weekend: Karl Denson’s Tiny Universe: Eat a Peach.  This band is so good!  They have an ace in every pocket! 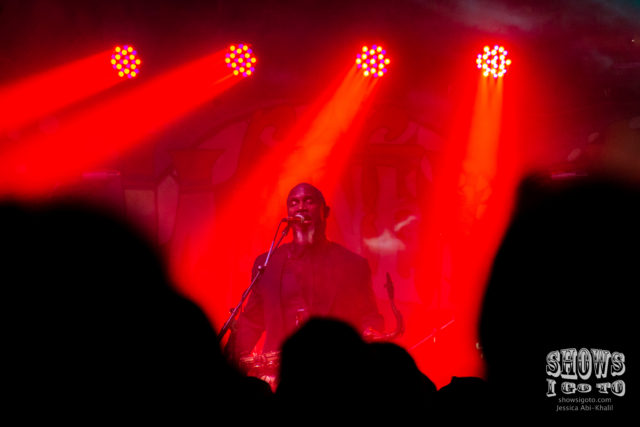 I just know a band will be awesome when they show up dressed to impress and boy do they ever!  These guys tear the festival down with hit after hit of originals as well as Allman Brother’s Band covers.  They introduce a new song off of their upcoming new album called “I’m Your Biggest Fan.”  The back and forth stellar play from both horn players is unreal.  Karl Denson and trumpeter Chris Littlefield lead the charge for this band to take the weekend home in style.  Stanton Moore of Galactic is on drums for the night and the rest of the band exits the stage to give the big time drummer some elbow room.  He destroys the solo as he brings the set down the home stretch.  They play a crazy long “Memory of Elizabeth Reed” that has multiple jam sessions and oh mah gawd was it delicious.  They followed with a sweet and soulful “Melissa” and the song brings everyone to their feet: “One Way Out.”  They finish and the crowd lets them have it. 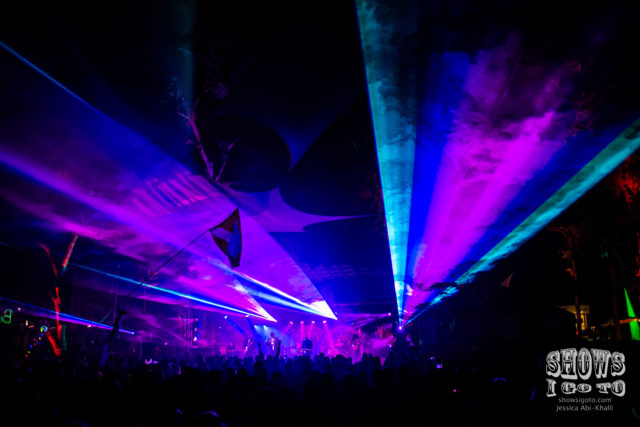 Loud and long is the applause as the final set of the weekend comes to a close.  But wait!  They come back on stage for one more song and it’s “Jessica.”  I only wish our photographer had made it to the close of the evening to hear her song … Other than that, the weekend is perfect! Check out all of this weekend’s photos in the gallery below and share this article with your friends!