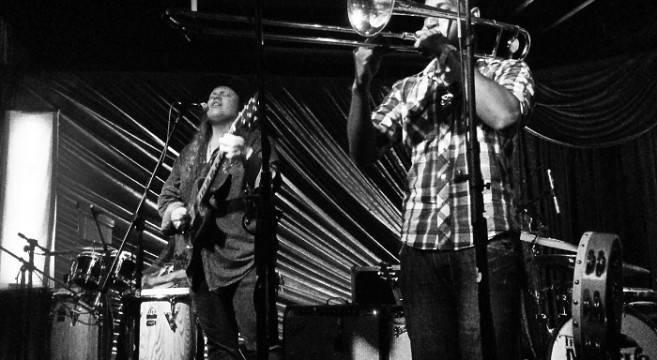 The King of Black Mountain | The Marcus King Band Live Review | In support of J.J. Grey and Mofro at Pisgah Brewing in Black Mountain, NC | July 10, 2015

He stands there casting a Stevie Ray Vaughan meets Ronnie Van Zant vibe, with a confidence that belies his nineteen years. Part Warren Haynes, part Otis Redding, part Miles Davis–Marcus King and his band are a soul-force to be reckoned with. Strangers raised eyebrows at each other, bodies were powerless but to be in motion, and everyone had the glowing smile that comes along with “discovering” a band that you know none of your friends has heard of.

That condition will not last long. Not with Marcus playing Haynes-like guitar riffs, his honey-dripped voice beckoning throngs of converts to the front of the stage. Trumpets purred alongside verdant keys, and only between songs did we dare to grab another organic Pisgah brew. When this author finally made the sudsy plunge, the bartender was bopping through a blissful pour, hips swaying, smile erupting from her face.

The Marcus King Band was an after thought for most of us. We were at Pisgah Brewing Company to see J.J. Grey and Mofro, one of Jacksonville, Florida’s own and a live performance that is never to be missed. Mofro had just satisfied the masses at Pisgah’s idyllic outdoor stage. It was late for most folks. Babysitters had to be relieved, drives to homes two towns over were beginning to appear epically long …

But the vibe was festive and many of us wandered contently into the taproom for one last brew and just a tiny bit more music. The Marcus King Band had other designs.

King’s name may be at the center of the band’s moniker, but he curiously stands stage right in front of his five piece group. His horn player occupies the other side and shares singing duty on a few numbers. During those moments, Marcus takes a step back and enjoys the show. The brew-addled brain has trouble deciding where to focus its attention when King reclaims the reins. Marcus’s guitar playing belongs in lofty company.

Stevie Ray Vaughan and Warren Haynes are not names to be used lightly. One must be careful not to throw around the names of luminaries in comparison with bands still trying to establish their name. Marcus King is that good on the guitar. He is equally outstanding playing a blues number, as he is walking the neck through a jazzy sequence. And then there is his voice. It has a powerful, well-traveled quality that lends authenticity to the music and sticks in your consciousness.

It was during their cover of The Beatles’ Dear Prudence that the enormity of the band’s talent came fully into focus. They made a Beatles song their own, a challenge that few outfits are worthy of tackling. Marcus King may never reach J.J. Grey levels of notoriety, but it will not be for lack of talent, charisma, and passion. This is a first rate band that will make a ton of people happy from now until they quit making music. Hopefully that day is nowhere near imminent.