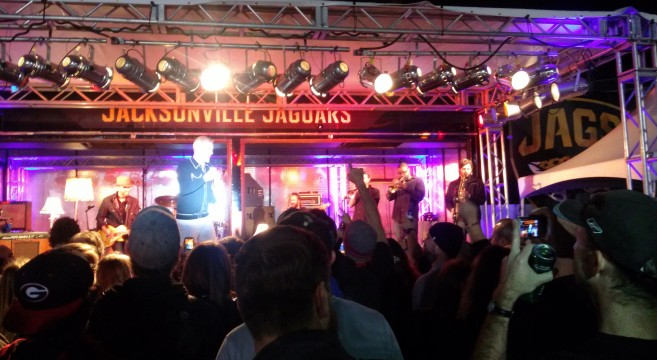 The National Football League is an enormous business dominated by major corporate sponsors. Pepsi, Coca Cola, Budweiser, Chevrolet, all manner of huge companies pay big bucks to have a presence on NFL broadcasts and in its stadiums. It would have been tempting for the Jacksonville Jaguars to fall in line with that norm when they hosted Thursday Night Football in mid-December. Throw a pre-game tailgate party with live music, food, and booze. Appease the big corporations by selling Budweiser, let Chili’s set up a tent pushing fried onion concoctions, and bring in Florida-Georgia Line to reinforce the stereotype of North Florida as a redneck hamlet and entertain the masses.

Instead, the Jaguars brass did something incredible. Jacksonville was authentically on display. The pre-game tailgate party adjacent to Everbank Field featured local favorites Bold City Brewery and Aardwolf Brewing rather than Bud or Miller. Local food trucks were lined up around the fence outside of Everbank Field selling everything from tacos to barbecue. And North Florida’s own J.J. Grey and Mofro played a free show for ticket holders that went much longer than we could have hoped and included a perfect balance of old favorites with newer and unreleased tunes. J.J. Grey and Mofro make what they call front porch soul–music that melds blues and soul with funk and southern rock. Frontman J.J. Grey grew up just outside of Jacksonville in a place that exemplifies the Southern Thing. That place in the world with a sometimes brutal history, but where neighbors take care of each other and people smile and say “hi” as they pass on the street.

They are not exactly a household name across the country, but J.J. Grey and Mofro have enjoyed some success building a following in both the United States and Europe. J.J.’s songs may have a largely southern setting, but his lyrics touch the human condition–love, sex, food, self-loathing, a myriad of those universal themes were on display during his hour and fifteen minute set prior to kickoff.

My concern while looking around at the crowd before the show was that folks would not appreciate what was about to happen on the level that it deserved. I long ago lost count of how many Mofro shows I have witnessed. There is a brotherhood to Mofro fans. We feel like we are on the inside of music’s best kept secret, but not in a pretentious or exclusive way–just that we are the lucky ones. We get excited when the boys have a chance to gain exposure in the way that they would playing Thursday Night Football.

This crowd was warmed up with some Puddle of Mudd-esque music (no offense, y’all who like Puddle of Mudd) and a way-too-excited DJ; and my initial impression was that this is what they think they are getting–some kind of corporate country-rock yawn-fest. For the first half of the show I saw heads respectfully bobbing with the music while people moved their feet and hips until each song was punctuated with cheers and whistles of approval. Then J.J. launched into the band’s seminal song Lochloosa and every voice on the lawn fell in concert with him.

Just like a blanket assessment of North Florida or the Southern Thing is unfair and misguided, my judgment of the crowd that night was mistaken. It was another lesson in humility inadvertently delivered by one of the great storytellers in music today. J.J. Grey and Mofro act as fine ambassadors to our great state wherever they play, but perhaps their strongest contribution to the promotion of a misunderstood culture was that hour and a quarter set on a Thursday night in December–a great crowd witnessing a diverse set by a band that long ago hit its stride and is continuing to display its unique brand of awesome for devoted and unexposed alike.