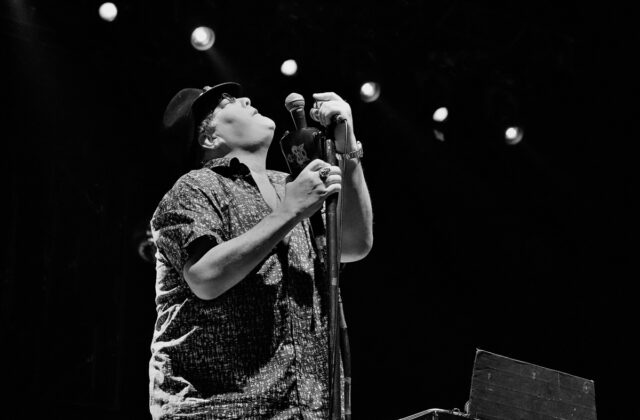 It’s the middle of summer in Jacksonville, Florida and guess what, it’s hot.  Like, I just broke a sweat stepping outside hot …  And it’s only going to get hotter with the arrival of the fiery “All Roads Runaround Tour” double-headlined by Blues Traveler and moe.!  Nearing the end of their extensive 21-city road trip, the one and only G. Love is opening every night.  The Sober Goat and I arrive to Daily’s Place, a music venue with 5,500 seats growing out of the South side of TIAA Bank Field.  The venue has stadium seating around a stage that is squeezed between two giant walls.  There is shade for the seats in the back and the top two tiers.  Stadium beer and food selection, and of course, stadium prices.  So we grab some cold beverages and join the growing throng of sweaty music lovers. The show begins with Philadelphia’s G. Love (Garrett Dutton) performing acoustically.  He greets the crowd with some banter about the NFL.  The Jacksonville Jaguars signed the former starting quarterback from his hometown Eagles, Nick Foles.  He warms up the already glistening crowd with “Fit Your Face” off of his upcoming album.  His hip-hop blues are great and get even better when Blues Traveler keyboardist Ben Wilson joins for a couple of tunes.  Back solo again he treats us with “Soul-B-Q” where he does it all — sings, plays guitar, drums with his feet, and plays harmonica!  His set also included his refreshing song, “Cold Beverage,” of which we are all in need of here at the break. Up next is Blues Traveler!

When I talk about Blues Traveler — it doesn’t matter what I say, so long as I write with inflection.  Which makes you feel like I convey, some inner truth or vast reflection!  😉 The opening lyrics for Blues Traveler’s “Hook” are some of my favorite.  John Popper’s existential approach to the blues/rock song is refreshing and true.  They take the stage and the crowd breaks from the mist-fans (thank you Daily’s Place!) and congregate back in the amphitheater for a rockin’ show! They cover the infamous “The Devil Went to Georgia,” by Steve Ouimette and Popper, wearing his signature wide brim hat, leads the way doing the fiddle’s portion on the harmonica!  Whoa!  They don’t stop playing and instead drop into the pocket for a jam session.  Bassist Tad Kinchla steps up, flicking and plucking his guitar, adding funk to the chill groove.  Suddenly, they turn a corner and pick up the pace.  The sound of the organ comes in high over top.  Together with the lights, they ramp up the speed one more time until they are going nuts!  Popper solos over the top and the rest of the band fades out while the harmonica solo begins the intro of “Run Around!” People jump to their feet, dancing and laughing, singing every word to each other!  The party has officially started!  They play a song off of their latest album, Hurry Up & Hang Around, during which Ben Wilson (keys) lets it all hang out with a long, winding solo that includes a “Cissy Strut” tease in the middle.  They haven’t stopped in between songs yet and continue the trend with a slower blues number.  Guitarist Chan Kinchla (Tad’s older brother) lights up the stage with his buzzing, neon tones reminiscent of Peter Frampton in “Do You Feel Like I Do.”  Popper tells us that he wrote the next slow ballad trippin’ balls on Jam Cruise.  He ends with a long solo that starts to bend closer and closer to the classic, “Anyways.”  They finish the set with a Brendan Hill drum solo into their biggest song, “Hook.”

They set break here, but don’t stop playing for long.  The lights stay low and the house music plays fast as stage hands bring out more instruments and set-ups.  moe. joins Popper and Wilson for a few classic covers including: Booker T. and the M.G.’s “Green Onions,” Tom Petty’s “Last Dance with Mary Jane,” and the Grateful Dead’s “Cumberland Blues.”  I’m blown away as this jam session is killer!  G. Love comes out for out for the finale and duels with Popper on harmonica!  The crowd hoots and hollers loudly.  I raise my arms in the air trying to catch as many of this vibe as I can on this hot as fuck Wednesday night!  Set break before moe. and maybe people thought it was over, but there was a stream of folks headed for the parking lot.  Maybe haven’t heard of moe. but either way, they are about to miss a great set! Those who do stay to greet moe. are loud and enthusiastic.  Ushers have relaxed and fans move closer to see this fearsome five-some perform.  They start off strong with their hit song “Rebubula.”  Guitarist Chuck Garvey’s solo has the party poppin’ off while bubble fill the room, mysteriously coming from the sound booth.  Finally the sun sets and the temperature wanes just in time for this jam session to heat up.  The next song, “Mar Dema,” has a Latin sound w an emphasis on percussionist extraordinaire Jim Loughlin as well as a sizzlin’ solo from guitarist Al Schnier.  All the instruments fall away in the jam leaving drummer Vinnie Amico alone to strut his stuff.  The others join back in for “YOY” and the jam saga continues. Tonight, songs have no end or beginning.  They are all one continuous and amazing soundtrack.  They close the set with another long song, this time playing “Puebla” > “Head.”  The music and lights are simply perfect. This jam submerges us under an ocean of guitar and groove.  Bass and drums working together to power this submarine of sound as we traverse the underwater seascape.  To keep us alive, Loughlin pumps oxygen down to us with his vibraphone.  We ascend rapidly, breaching the water and the crowd goes wild.  moe. comes back out to finish the night with an “Okay Alright” encore.

The Sober Goat and I pile back into the car and make our way back to Orlando, to tell of the glory and majesty of the “All Roads Runaround Tour!”