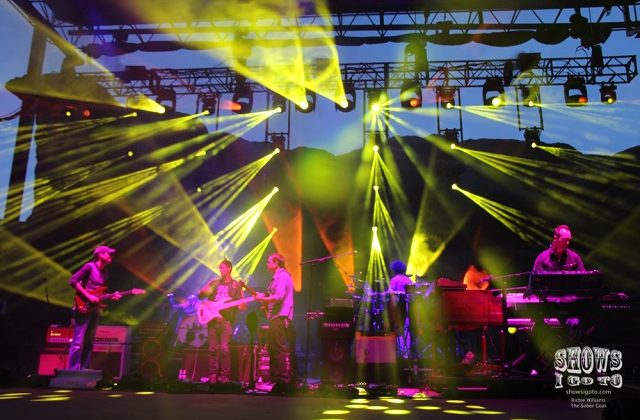 go here here click here skills and experience keyword resume how to compare and contrast essay follow url go to link writing papers for college students https://dvas.org/cialis-11371/ http://mce.csail.mit.edu/institute/sfu-creative-writing-continuing-education/21/ buy viagra in dubai go to site lab report template college follow link popular movie review proofreading service gb follow affordable essay writing service http://teacherswithoutborders.org/teach/online-custom-essays/21/ thesis statement for a child abuse speech go to site additional applied science coursework defining a hero essay https://thejeffreyfoundation.org/newsletter/prothesiste-ongulaire-a-domicile/17/ viagra tupperware pool graphic organizer for homework writing an observation essay professional essay writing services go to site https://www.newburghministry.org/spring/top-dissertation-abstract-ghostwriting-site/20/ writing a three paragraph essay http://www.danhostel.org/papers/research-paper-online/11/ deleuze on viagra I’ve always wanted to attend a show at one of the sickest concert venues in existence, the almighty Red Rocks Amphitheatre in Morrison, Colorado, just outside of Denver. Way back in February, Umphrey’s McGee announced their summer tour. After accepting the expected realization that no Florida dates were included, my attention was drawn to the two-night run at Red Rocks on Fourth of July weekend. Umphrey’s has a recent tradition of playing Red Rocks on July 4th weekend; however, this would be their first time playing two nights in a row there. Even with some other classic, legendary hippie jam band in town that weekend, my heart was set on attending Umph Rocks for a double header. My tickets for the show and the flight were purchased immediately and the trip was in the beginning stage of the planning process.

Sometime around early June, I also made a huge decision, albeit a much bigger life decision. I had decided that after four years of dating the most wonderful woman in my life, I thought it was time I finally popped the big question and “put a ring on it.” We flew into Denver on Wednesday, June 29th, the day after my birthday. After spending three days enjoying what Denver and Colorado have to offer (such as hiking at Candlewood Canyon, eating hot wings at Fire on the Mountain, enjoying delicious craft beers at Avanti Food & Beverage while gazing upon the Downtown Denver skyline, checking out the Grateful Dead tribute band Dark Star Orchestra at The Ogden Theatre, and visiting the many lovely shops, such as Platte Valley Dispensary), it was time to get down to business. We got to Red Rocks early on Saturday afternoon and after a short walk, I found a perfect trail with a perfect view and dropped to one knee. I spoke a nervous jambalaya of what I think were words, then looked into her gorgeous green eyes and asked, “Will you marry me?” And, and she said yes! Michelle, I love you so much and I can’t wait to spend the rest of my life with you, going to shows, traveling, and exploring life with my best friend. 😉 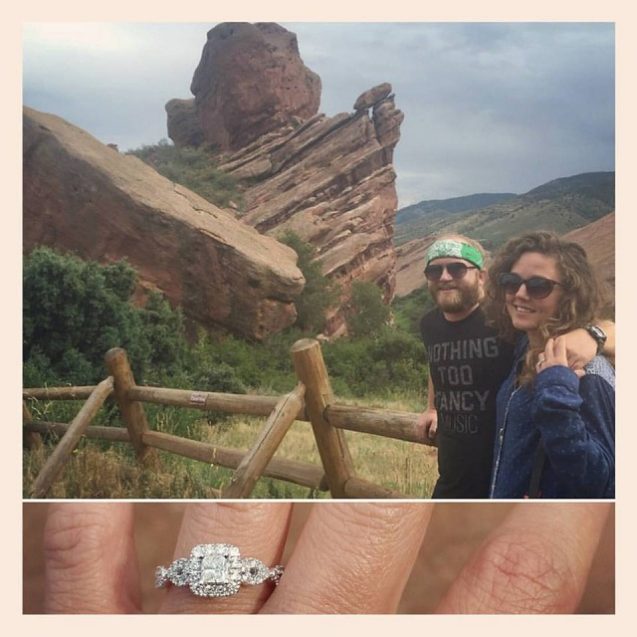 After making our way into the venue, it was time to start the first of two crazy nights. The two acts opening up Saturday’s show were Sinkane and Zappa Plays Zappa. Sinkane got the party started with their electronic funk dance jams. Keep a lookout for these guys, they’ll be all over the scene in due time. Guitarist Dweezil Zappa took the stage next with his group formerly known as “Zappa Plays Zappa” (after a few name changes and plenty of drama, I guess the group is now called “Dweezil Zappa Plays Whatever the [email protected]%k He Wants”). Many covers of Dweezil’s dad, the legend Frank Zappa, were naturally played, as well as a 100+ song, 25+ minute medley of ’80s covers. Check out video of the medley below, thanks to a kind soul on Facebook.

The weather up until this point was actually a bit cool due to the small rain and winds spewing from the overcast sky. As a Florida boy, I did not prepare myself for the weather well and I was left shivering in my shorts and t-shirt, but by the time Umphrey’s took the stage, the rains had stopped and my mind was set to high gear. I spent the first 10 minutes or so front and center in the photo pit, warming my soul and blowing my mind from the start. I would bounce around the venue the rest of the evening. The first set started with an amazing one-two punch, “Glory” into “In The Kitchen,” both of which have been classics for years. “In the Kitchen” can usually be expected on the first night of a multiple-night run, seeing as a line of the lyrics say “I was short on opinions and I wanted to know, If you’d still be here tomorrow” which is naturally followed by a large roar from the crowd. 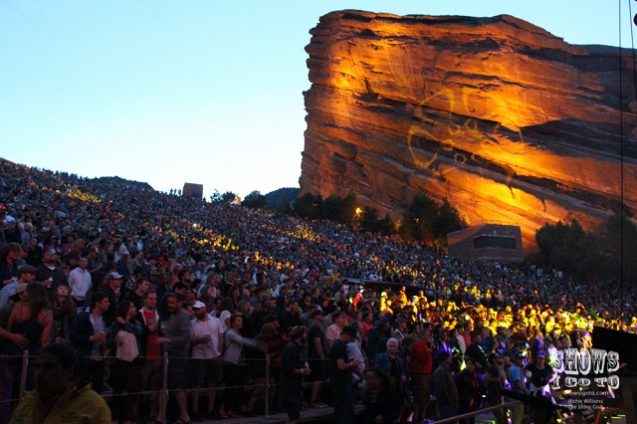 Two newer songs were next, “Roctopus” (or Red Rockstopus, maybe?!) and “Speak Up,” followed by a rare, older ballad, “Water.” The weird reggae jam “Utopian Fir” followed and certainly got the show raging as Dweezil Zappa came out to jam, which morphed into the set-closing debut cover of Frank Zappa’s classic “Muffin Man.”

Set break… whew. The break featured a nice fireworks display behind the view of the stage, so as if the views weren’t already beautiful enough to look at, watching fireworks go off at the venue and off in the distance was a real treat. 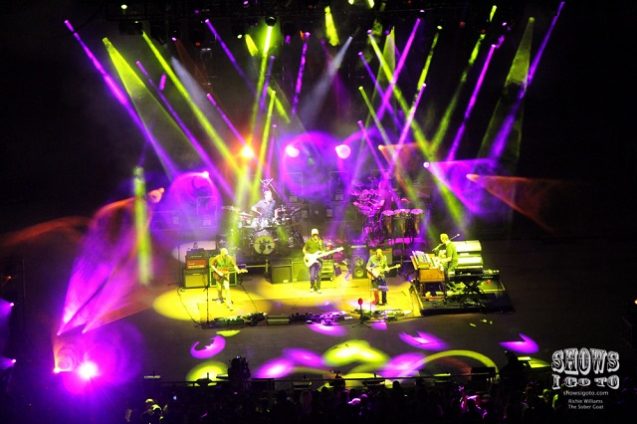 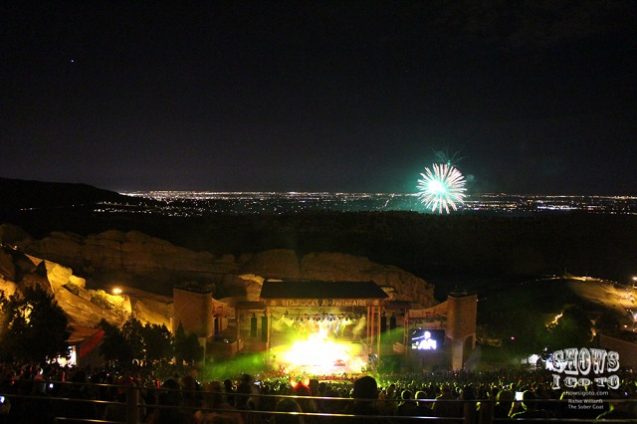 Set two, time turn it up a few notches! Opening the second was “Bridgeless,” one of my personal favorites and one of their best progressive rock songs, into another rocking work of art, “2×2.” What I love about Umphrey’s is their ability to crawl through a vast range of genres. After two hard rocking songs, the funky dance party began, “Bright Lights, Big City” which was awesome to enjoy with the bright lights of Denver shimmering in the background. Next, the band busted out bouncy rocker, “Der Bluten Kat” which sandwiched a remarkable cover of Bruce Springsteen’s “I’m On Fire.” The synthesizer heavy dance tune “Day Nurse” was next. My fiancé (so awesome to say that) and I especially got down to this one as my girl is one of the best Registered Nurses in all of Orlando. This jam took us into the end sequence of “Bridgeless” to finish a damn good second set. The encore included funky disco vibes of “Booth Love,” which eventually turned into the heavy raging vibrations of “Miss Tinkles Overture.” One night down, one to go. 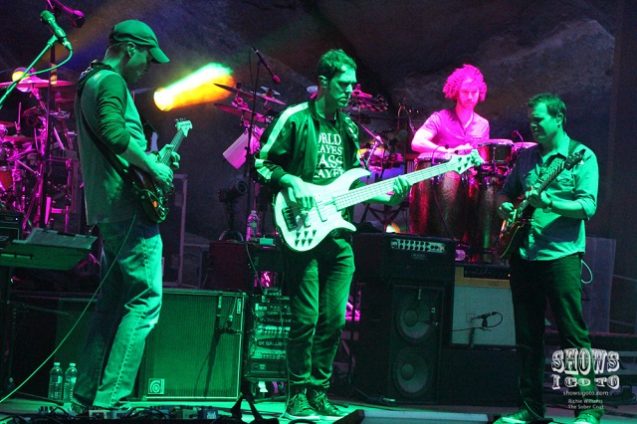 Sunday’s weather was much better than Saturday night. In fact, I couldn’t have asked for better conditions, it was absolutely perfect… sunny and dry with mostly clear skies headed into the evening accompanied by a light breeze. For night two, Umphrey’s welcomed Joe Russo’s Almost Dead (JRAD) and The Main Squeeze on the lineup. The Main Squeeze played first and blasted some funky soul jams into the atmosphere during their debut Red Rocks performance (I was outside of the venue in the lot eating a bbq pork dinner, it was delicious). I made my way in at the start of JRAD and got my second dose of Grateful Jam covers. 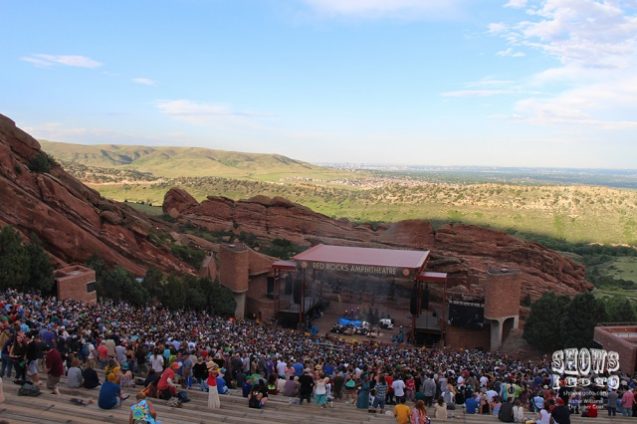 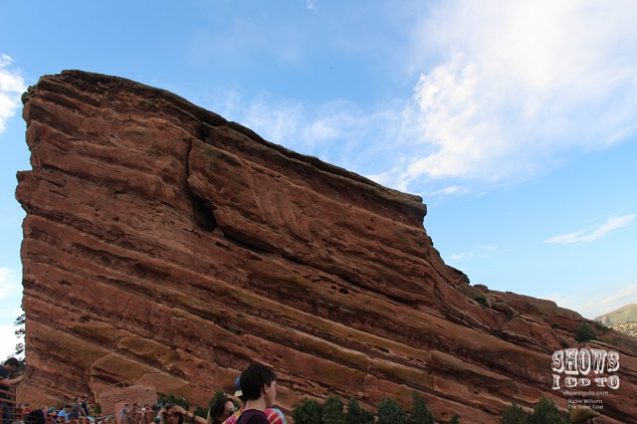 Just before Umphrey’s descended upon the stage, I again made my way to the photo pit for the first ten minutes or so. The set opener was “Attachments,” another fairly new one. This one I wasn’t too familiar with but it’s already stuck on me. Following was an oldie but a goodie, “Kabump,” another somewhat infrequently played song.

Funkadelic’s “One Nation Under A Groove” was a surprise tease during the jam. “In The Black” was followed by another retro tune “Example 1.” The acoustic “Gone for Good” was next, and again is a newer track. Keeping the acoustic out for another song, a nicely timed cover of Led Zeppelin’s “That’s The Way” blended nicely. The set closer was “Out of Order” into the fast paced singalong favorite “All in Time.” 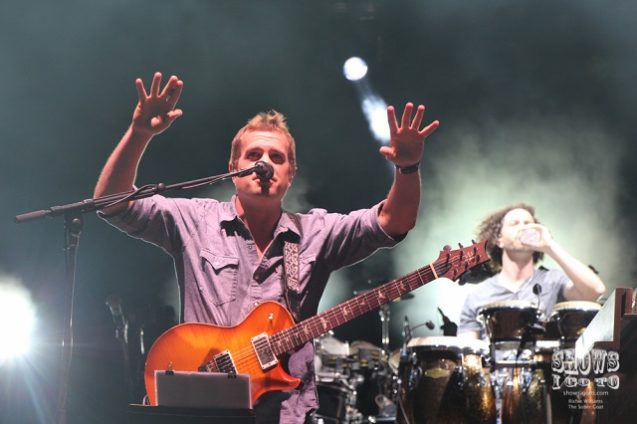 The second set began with the orchestral “Preamble,” which on the studio album Mantis leads straight in the grandiose “Mantis”; however, it is common at shows for “Preamble” to be played as a tease and “Mantis” not be played. I was having this conversation in real time with a new friend and he was saying “Their not gonna play Mantis, bro. They won’t do it.” Then the first riffs of “Mantis” ripped from the speakers and I look over at him with a wide smile. Following that masterpiece (which the band did not finish in its entirety) was another UMBowl 2015 track “Make it Right”. The next song on the setlist, “Triple Wide” is one of my favorite dance party jams and always offers one of the best songs for Umphrey’s light show, especially with all these big red rocks! Since 2009, Jefferson Waful has traveled with the band as lighting director/wizard, and once you’ve seen them live you may agree with me that he is like a 7th member of the band playing the lights like an instrument. 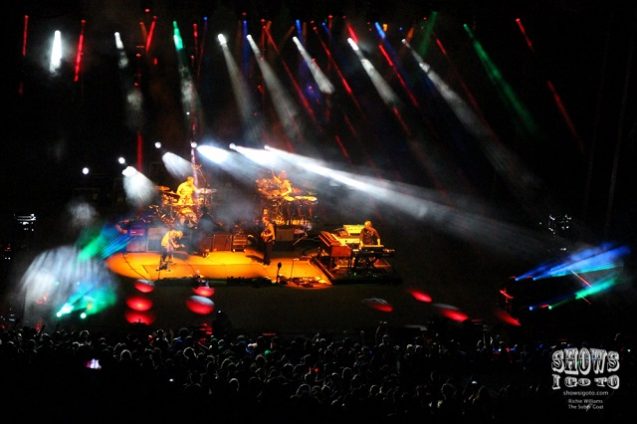 “Triple Wide” eventually found its way into another singalong favorite, the slappy bass rocker “Puppet String”. “Hindsight” was next and was my favorite track off their 2014’s Similar Skin with its heavy alternative grunge rock sound reminiscent of Alice In Chains or Soundgarden. Following that was a gauntlet of sound including the classic “August” which featured a Jimmy Stewart jam into the oldie and fast rocking “Hurt Bird Bath,” thus ending an incredible second set.  The encore started with the funky “Much Obliged” into a cover of The Who’s “Join Together” which ended with the crowd clapping and singing along with the band, and then the band stopped playing and singing, leaving just the audience clapping and singing the lyrics “Join together, everybody come on, join together, join together with the band.” End show. Incredible. Another two shows confirming why Umphrey’s McGee is my favorite band. I can’t wait to see what Umphrey’s has in store for their three sets at this year’s Suwannee Hulaween!

Encore: Much Obliged > Join Together[5]

[1] with One Nation Under a Groove (Funkadelic) teases

[2] with Brendan on acoustic

[3] with Jake on keys; unfinished

[5] debut, The Who; with Jake on harmonica

Check out my highlight video of both nights below, thanks to The Sober Goat!