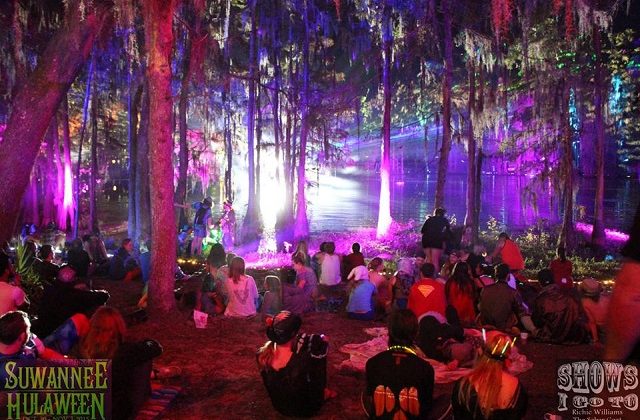 Suwannee Hulaween returns for the fourth year in a row for what should be another massive festival at the Suwannee Music Park in Live Oak, Florida on Halloween weekend (Friday, Oct. 28 — Sunday, Oct. 30, and a pre-party on Thursday the 27th. Check out our festival announcement HERE! Silver Wrapper and Purple Hat Productions have announced the phase two artists for the fourth annual Suwannee Hulaween, the lineup for the Thursday Pre-Party, and a new stage.

Aside from the seven sets of The String Cheese Incident and appearances by other headliners such as My Morning Jacket, Disclosure, Logic, and many more, the second wave of artist additions include world-renowned techno producer and Dirtybird Records founder Claude VonStroke, one-of-a-kind soul singer and his band Charles Bradley and His Extraordinaires, dreamy sub pop artist Washed Out, French DJ and producer Brodinski, Chicago-based electronic music duo Louis the Child, Grammy award winning bluegrass band The Travelin’ McCourys, and English electronic house duo Bondax, as well as Larry Keel & Drew Emmitt, Twiddle, Quixotic, Too Many Zooz, Thriftworks, SunSquabi, Louis Futon and many others.

For 2016, the event producers have announced the addition of a brand new stage. Located near the horse stable camping area, the new stage will help eliminate congestion at the Amphitheater Stage and will be comparable in size and space.

The event organizers also promises that their Spirit Lake art installation will be larger than ever before. Attendees have plenty of time to wander the mystical campgrounds abuzz with costumed fans and interactive camps. In addition to the String Cheese Incident playing a Halloween-themed set, the fest will also feature theme nights, yoga, workshops, and endless interactive surprises throughout the weekend. Act fast … only 20,000 tickets are available for this year’s festivities.  Check out the full lineup below. Get tickets here! An EZ-Pay Payment Plan will be available along with the general on-sale. For fans looking to take the experience to the next level, a limited number of Ultimate Incident VIP Packages will be available.