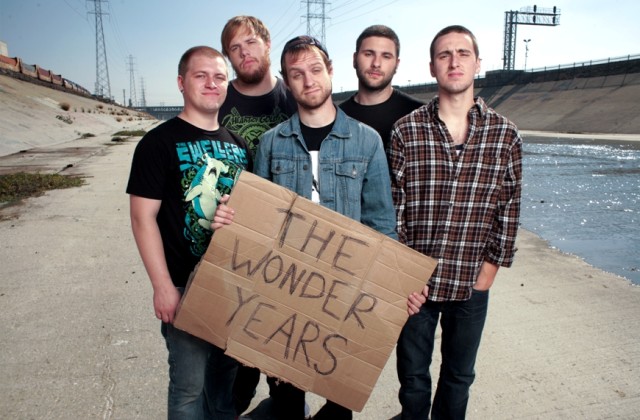 Fresh off the release of their new album, No Closer to Heaven, The Wonder Years are coming to House of Blues in Orlando, FL on November 20, 2015 (WIN TICKETS BELOW)! Bringing along excellent acts, Motion City Soundtrack, You Blew It!, and State Champs, these kings of pop punk continue to prove that they are the true class of the scene. With a crazy live act, the musical chops to back it up, and extremely relatable lyrics, The Wonder Years have become one of my must see bands every time they come to Florida.

Formed in Lansdale, Pennsylvania in 2005, The Wonder Years put out a couple of split EPs when they were signed to No Sleep Records in 2007. After releasing their first album, Get Stoked On It!, the band really saw their popularity expand but it wasn’t until the release of their second album The Upsides, they really blew up.

Featuring songs about fighting back against an assortment of oppressors, especially depression and the feeling of defeat at a young age, songs from this and their follow up, Suburbia, I’ve Given You All, and Now I’m Nothing, really resonated with me and I immediately began to see the band as much as possible. With the release of their fourth album, The Greatest Generation and now their latest album, The Wonder Years have truly put together an impressive resume and trust me, you don’t want to miss out on seeing these guys (Win Tickets Below).

Main tour support comes from one of Mitch‘s favorites, Motion City Soundtrack, who performed in Orlando earlier this year for the 10 year anniversary of their hit album, Commit This To Memory (Motion City Soundtrack Live Review Here). One of our first recorded interviews was with pop-punk heavy hitters, or as we coined “The New Found Glory of our generation,” the almighty State Champs (Derek DiScanio from State Champs Interview Here)! Finally, opened the night, are Orlando hometown heros (and favorites), You Blew It! Needless to say, this is a show you will not want to miss.

Want to win 2 Tickets to see THE WONDER YEARS W/ MOTION CITY SOUNDTRACK at House Of Blues in Orlando, FL on Friday, November 20, 2015?! There are several ways to enter!*

STEP 1: Complete one of the tasks below*

STEP 2: Fill out the entry form

Get Tickets to THE WONDER YEARS in Orlando HERE!(You can always give them to someone else if you win)