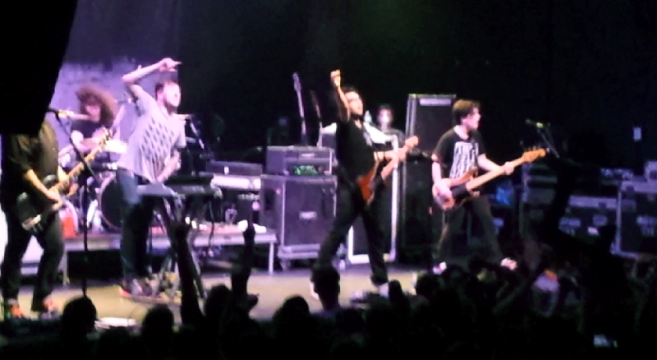 I was writing in red pen (like usual) upstairs, house left, at the Motion City Soundtrack show at The Beacham in Orlando. They were performing one of my favorite albums, Commit This To Memory, in its entirety. I didn’t realize the irony at the time, but staring at the album title, it’s quite clear: Commit this to memory, Mitch. Let this epiphany be a life lesson you never forget.

I wrote about how I got fired from my day-job three weeks before the show. I haven’t told many people. That kind of shit hurts you. It hurts your ego. But this life isn’t about “ego” now, is it? It hadn’t really sunk in yet, but for some reason, it was hitting me hard this night, as the last few weeks poured out of my pen. I’m completely broke (I’m not even sure how I’m going to pay rent next month, much less eat next week). I am fucking scared. But, I am free. I am fucking free. And that’s the beauty in this. I’m finally finding freedom. All of the negative shit that has happened recently just slammed into all of the positive things currently happening. When I looked up to the stage, it all made sense. And I realized … I am exactly where I need to be. I’m doing EXACTLY what I’m supposed to be doing, something I absolutely love. And I’m doing what, in my heart, truly feels right.

Live music, writing, feeling, living, these are all things I love and am infinitely passionate about. I am stronger than ever, spiritually. I believe. I believe in Shows I Go To. I believe in our team. I believe in myself.

I smiled and downed the rest of my Stella can. It was still cold and crisp. I was a bit worried this Motion City Soundtrack performance wouldn’t be as good as shows I’ve previously caught. My main concern was their new drummer — Claudio Rivera, formerly of Saves The Day — would not meet my very high expectations set by former drummer, Tony Thaxton. Tony had such an innate attention to detail. He was a very precise performer. He also sang backup vocals, which I feared would be ruined, or uncomfortably changed, since his departure.

Well, I was right. Claudio did not meet my expectations, he exceeded them, with genuine passion and an exploding afro of black curls which he poured perfect vocals out of. I was relieved. More so, impressed.

Tony used to sing a line I often repeat to myself. As Claudio sang it, I held my beer as tall as I could, closing my eyes before dropping down to rock out. The lyrics hold true to the eruptive changes in my life, the epiphany I had, and the brightest idea I’ve ever “lucked” into: starting ShowsIGoTo.com. (The album title was also taken from lyrics within this song.)

I’m just a stupid fuck with brilliant luck and sometimes a bright idea.”

When Motion City Soundtrack went into “Feel Like Rain,” I was fully focused on testing Claudio’s ability. The intro features some fancy footwork on the drums, keeping a steady open/close hi-hat on every beat, coupled with double and triple bass drum beats. Again, Claudio passed with flying colors. I also realized, I’m so much in love with the drum parts in this song. So much so, I only knew half of the lyrics in the first verse! Sorry, Justin!

Justin Pierre and his hair are still perfectly pitched. His falsettos and ability to climb octaves remain as impressive as ever. I wouldn’t expect any less from a Gemini who has the same birthday as me, May 26. 😉 I sang along to the whole record (minus half the one verse), including the bonus track “Invisible Monsters.” Once they finished Commit This To Memory, they went into the newer songs (my personal favorite “Her Words Destroyed My Planet,” “This Is For Real,” and “A Life Less Ordinary”), and then into some older songs (“Capital H,” “The Future Freaks Me Out” [which was a working title for this piece], and “My Favorite Accident”). I loved the brand new song they played, “TKO,”which serves as the first single from their new album, Panic Stations, out Friday, September 18, 2015 (yes, albums are released on Fridays now). This will also be the first album which features Claudio Rivera on drums. I’m stoked because he is a much, much better fit here than he was in Saves The Day.

The last bit of clarity I took from the show was during my brief pause at the merch booth, prior to exiting. The shirt read “Everything Is Alright,” the title of one of Motion City Soundtrack’s most popular songs. I believe wherever I end up is exactly where I should be. We’re making it, as a team, at ShowsIGoTo.com to a comfortable growing point. Now comes the real challenge of becoming a profitable business, keeping true to our roots, and making what we’ve worked so hard to grow becomes a place where we enjoy to work and play every single day. I accept the challenge, wholeheartedly. I’ll take a line from Justin Pierre here and say “It’s all uphill from here (at least I hope so).”