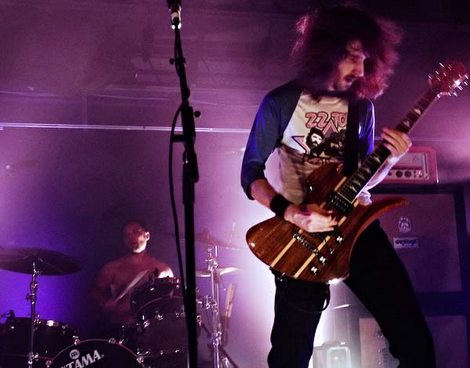 When an album opens with a track called “Unicorn Farm,” a moniker that seizes the senses with its promise of free roaming mythical creatures, the listener better be ready to sit a spell and pay attention. It’s also an apt foreshadow of what to expect from the rest of The Sword’s High Country. “Unicorn Farm” leads off with controlled furor. It’s only a minute long, just the tip of what grows into a solid rock of aggressive rock n’ roll that requires ambidextrous attention.

High Country’s rich imagery commands its own discussion. On “Tears like Diamonds,” The Sword paints a picture of sparkling, meaningful sorrow that puts tears on a rightful pedestal. The album plays like a literary Black Sabbath effort, one colored by the listenability of Led Zeppelin’s influence. “Tears like Diamonds” exemplifies the rare air that High Country occupies.

It’s definitely metal, but not stereotypically so. Devoid of cliché and clearly musically influenced by the heavyweights of metal, High Country refuses to be categorized as such. The guitar riffs are recognizable as metal, but there is almost a folk sensibility to the songwriting approach. Each chorus is crafted in a sing-along-friendly structure that helps the listener get a brain break from the heavy guitar.

High Country welcomes the non-metal fan with bite-sized chunks of rock. All but three tunes come in under four minutes in length. There is no wasted space or time on The Sword’s new record. It’s a compact, powerful album that fits a lot into a small space — the Ikea of metal albums.

A record this dense could leave the listener mentally taxed, even dazed. Yet, The Sword manages to stimulate without over-burdening. They provide the listener with time to digest heavy guitar and soaring drums, while also leaving space for ruminating on vivid imagery. High Country is hard rock for the music fan. It is accessible, smart, and passionate — all of what one wants in a piece of considered art.