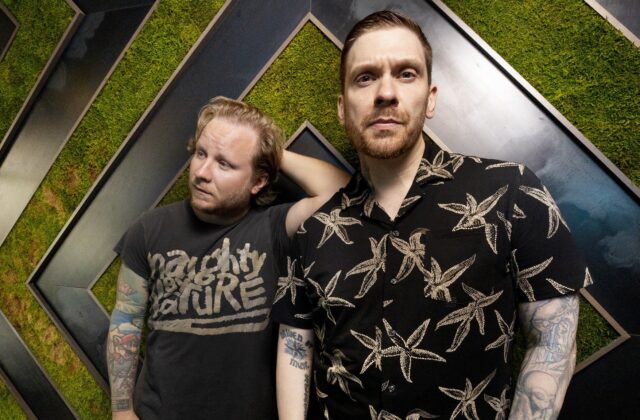 On December 31, 2021, a new generation of rock music will be ringing you into the New Year at the House of Blues in Orlando, FL (TICKETS HERE). The band playing this music is known as Smith & Myers, founded in 2014 by Brent Smith (singer) and Zach Myers (guitarist) as they momentarily step away from Shinedown, the hard hitting rock band from Jacksonville, FL. Shortly after the two formed “Smith and Myers” they began to work on the sixth studio album for Shinedown. With 20 songs and two albums to their name, the duo has only just begun their musical career. Both albums released by the band were released in the short span of less than one month in 2020; Volume 1 being released on October 9th, and Volume 2 being released on October 23rd. The two albums shine a light on just how powerful barebones rock music can be. Stripping rock of the hard hitting guitar and the echoing drums, Zach Myers struts the chords of his guitar giving each song a unique feel, while Brent Smith poetically sings softly over each chord.

Each song Smith and Myers put out is an acoustic hit that reshapes the acoustic rock genre that is beginning in its rebirth. With Smith’s poetically sharp and elegantly rough voice paired over Myers sharp hitting chords that allow you to forget there was anything but him playing the guitar. This show is not that anyone will want to miss and is the absolute best way to bring in the new year. 2021 has been a long year for everyone, end it with two of the greatest rockers of our generation, and make 2022 a year you never forget. Win tickets below.

We’ve teamed up with Live Nation FL to bring you some Free GA tickets to Smith & Myers at House Of Blues in Orlando on December 31, 2021!