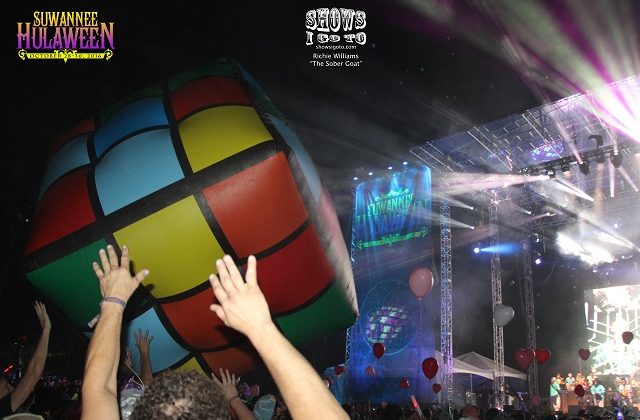 The String Cheese Incident headlined Suwannee Hulaween, the biggest and baddest festival to ever grace the Spirit of the Suwannee Music Park in Live Oak, FL. They played seven sets throughout the weekend, with the featured set being an ’80s cover set aptly named “Stringier Things,” a play on the hit Netflix show Stranger Things which tells the story of young kids in the 80s. Along with many heart shaped balloons released during “Love Shack” and giant Rubik’s Cubes tossed into the crowd during the second interlude before Queen’s “Another One Bites The Dust” (which proved to be exciting times in the crowd, especially for the taper section, hahaa), a giant inflatable Stay Puft Marshmallow Man was also set loose to the crowd. And to top it all off, a giant fireworks display and confetti craziness closed out the theatrics of an absolutely unforgettable set.

The Sober Goat also got footage of SCIs first set of the weekend on Friday!

Check out my bigly Hulaween photo gallery below.