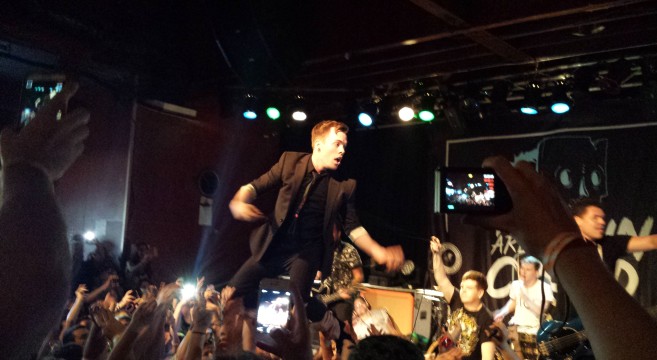 Set It Off is the best live show I’ve seen all year. And I’m still not even a fan of their music! I was completely blown away and am in love with their live performance. Yes, I am sucker for theatrics and watching people do what they love. And they did it fucking well. Really well.

Set It Off is a band from Tampa, FL, about an hour and a half from where I live in Orlando, FL. I’ve seen their name around and I’ve probably been to shows where they’ve performed but never have I witnessed a Set It Off live set. Holy shit, I was completely missing out.

The entire performance was carefully calculated, from setting the stage up, through sound check, until the very last note of their very last song in their set. The lead singer, Cody, is fucking brilliant.

Before I get into that I have to address that The Social Orlando has the coolest fucking bouncers ever. During Set If Off’s set, I was a bit nervous at the increasing amount of people riding the crowd. I was almost certain people were going to start getting kicked out by the bouncers as soon as they got off stage. Nope! Dude was high fiving crowd surfers when they got off stage. The crowd surfers were just as surprised as I was! It was fucking awesome. Every venue needs bouncers like this. One’s that are not only professional, but cool ass fucking dudes or dudettes. If you go to a show at the Social and follow the rules, then these people will be fucking cool to you.

Rule 1: If you crowd surf and end up on stage, make your way to the side of the stage, where the ramp is, as quickly and safely as possible without knocking any shit over.

Rule 2: Don’t be a dick and stage dive or you’ll get kicked out.

Rule 3: Don’t be a dick and smoke pot in the bathroom or sneak in a flask of anything.

Rule 5: Listen to Johnny Knuckles’ music. This dude may come off as a bad ass mother fucker, and he is, but he has the voice of a saint. I think I’ll call him St. Knuckles from now on. Yeah, that sounds good. Here’s a video of this gorgeous man singing.

You know that sometimes awkward space between songs where bands talk and make feeble attempts to recite jokes or convey how much they appreciate the audience or some bullshit like that? Cody from Set It Off reengineered that space between songs. It’s normally a small point where the audience temporarily loses interest in the performing artist until they begin the next song. Every now and then, the next song is one the audience is really looking forward to and they get really stoked and forget about the dead space before the song.

Cody took that 30-45 seconds and made it into a set-bridging story that picked up between each song. It was easy to follow. It was raw and emotional. It was creative and relatable. A story about a man and a woman, and another woman, and death and tragedy and murder and the police. I was practically fucking drooling waiting to hear what would happen next. I wasn’t waiting for the next song to be played. I was eagerly waiting for each song to end so I could hear the next part of the story. This was such a fucking turn on for me. I go to shows multiple days of the week, every fucking week. I am always waiting for the next song. Never am I excitedly waiting for the break between songs. I was completely fucking fascinated. Here’s a shitty pic: 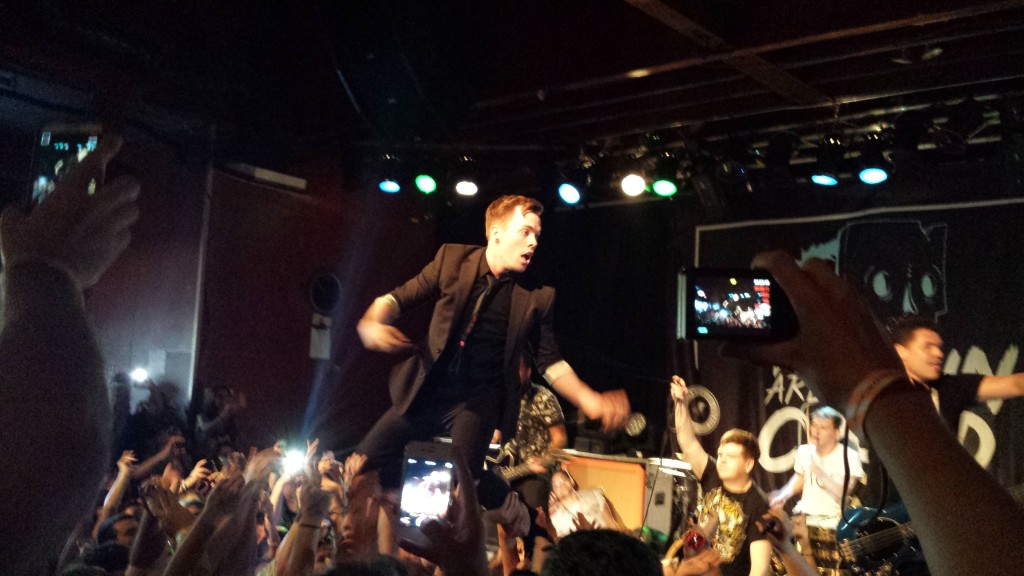 The intricacies really blew me the fuck away. Cody carefully connected each bit of the story to the beginning of the next song they went into. He would end each chapter of the story with the first line or the title of the next song! “Kill the lights! I’d Rather Drown! With four simple words: Breathe In. Breathe Out.” Check out the video for “Breathe In, Breathe Out” by Set It Off:

It all started when a man catches his wife cheating on him. He decides to kill her and the adulterer man. He burns them down inside his house. He runs from the police, falls into depression, almost gives up, and finds himself in a diner. The diner is where he meets a woman who changes everything. She is also on the run from the law. They fall in love, run away together and the police are constantly hot on their tails. They seek shelter in an abandoned warehouse. She peeks out the window and is suddenly shot through the window by the FBI right in her gut. They cry and get angry and know that it’s the end of the line and it’s finally over. But they draw their guns and “Partners In Crime” is the last song. It begins with the lyrics “You’ll never take us alive!” It was absolutely fucking brilliant. I actually felt it. I was involved. I couldn’t help it. I loved it.

Check out the video for “Partners In Crime” by Set It Off:

Set It Off were part of a 5 band bill on “The Reunion Tour” headlined by We Are The In Crowd. The band that played right before Set It Off was State Champs. I had the privilege of interviewing the lead singer of State Champs before their set. Check it out.