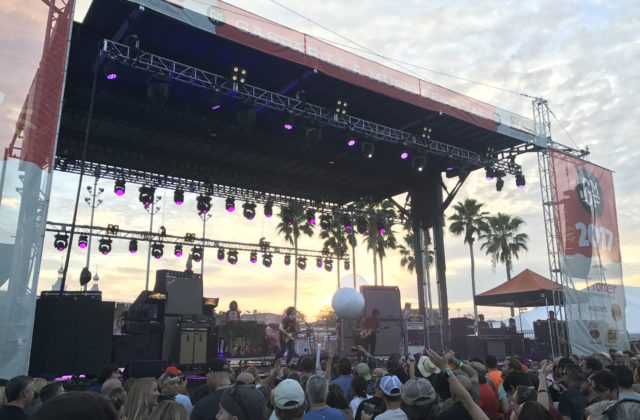 Ryan Adams is the soundtrack for the transition to adulthood. Adams’s brand of melancholy is not stuck in teenage angst. His subject matter, playing, and performance are rooted in coming of age. For this author, the transition came along in his mid-twenties. Few people are ready when it comes, but I was spectacularly ill-equipped.

Seemed to me like I had it together. I was finishing graduate school, had a wonderful girlfriend, and was surrounded by interesting, intelligent people. Looking back, I was a wreck. Thankfully, Ryan Adams was a constant commiserator during that time. To see him nearly a decade after that pivotal point is an exercise in exorcism.

The headliner of Tampa’s always excellent Gasparilla Music Festival (GMF), takes the stage early Sunday evening. The weekend has again been outstanding. The bar is set high and the buzz from Adams’s outstanding new record Prisoner is palpable among the crowd. GMF’s balanced lineup has been building all day to this moment.

Ryan Adams takes the stage with little fanfare. His trademark giant amp and faux arcade game display loom in the background. Adams opens with “Do You Still Love Me?” from the new record, “To Be Young” from the brilliant Heartbreaker, and “Dirty Rain” (this author’s favorite Adams tune) from Ashes and Fire. Despite the depressing content of Ryan Adams’s catalog, his penchant for heavy rock n’ roll riffs uplifts a live audience.

A beach ball finds its way on stage. The mood is, well, festive. Adams is no Sandy Koufax, but the Los Angeles-based tunesmith picks up the ball, throws it back to the crowd, and quips, “We got a point!” It’s the first crack of a night filled with jokes in between perfectly executed songs.

Ryan Adams is more than one of my favorite songwriters, he is without a doubt my favorite comic. It’s a realization which comes mid-set when he says,

I don’t know why they book me at festivals. ‘Let’s put the saddest guy at the end of a festival.'”

It’s a theme he has revisited throughout the performance. The guy is beloved worldwide, but he still seems to feel a level of discomfort with the devotion expressed by his fans, as if he does not deserve us. And, while that particular punchline may not play well in isolation, it is just another in a theme building throughout the set.

For every self-deprecating joke, there is a corresponding other-worldy riff or brilliantly spun yarn. A utility man of sorts comes out every so often and exchanges a tiny smoldering cauldron next to his microphone. The experience adds to the mystique of Ryan Adams. Is the cauldron related to his well-publicized battle with Meniere’s disease? Is it some quirk of the often mercurial genius?

A security guard keeps holding up a sign reminding us not to take flash photos. Such a light could send Adams into a migraine or seizure so the festival staff keeps the idea fresh in our minds. Adams decides to have a little fun. Ryan Adams, the best comic I know, launches into an improvised song about the “dude with the sign that says, ‘no flash.’” The moment is endearing and hilarious. His band, who have been enamored with every song, singing along despite not being mic’d, are in stitches witnessing Adams play a two minute tune about the guy with the sign and the guy up on the green thing (a huge lift) who apparently can’t read based on the gigantic flash periscoping from his camera.

“Magnolia Mountain” arrives near the end of the set. The song is not necessarily about growing into an adult, but in this moment it hits me like an expose of so many poor choices. Adams, who is hyper-aware of his crowd on this night, seems to be communicating directly with those souls in the audience who process his music as a soundtrack for their attempted maturity.

Ryan Adams continues to improve fifteen albums into his career. Despite his jokes to the contrary, a headlining slot on the come-down Sunday of Gasparilla Music Festival is a perfect pairing. The sun sets behind the minarets of the University of Tampa, across the gorgeous Hillsborough River. Oranges and reds blend with cauldron smoke and the haze of a satiated festival crowd. Ryan Adams and his outstanding band ring out the last notes of the weekend. There is no following that act. Time to head back to real life attempts at being adults.