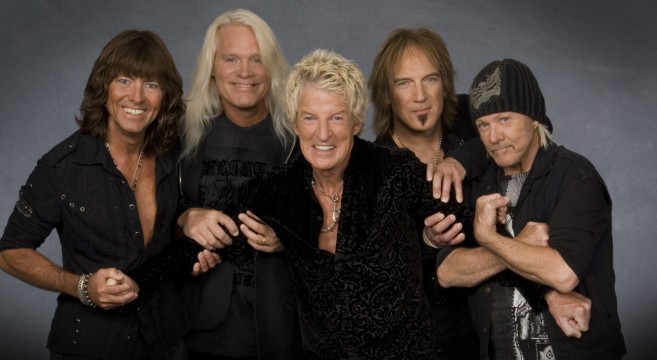 First off, it was freezing.* Second, I can’t really complain because I got to see REO Speedwagon 2 ½ blocks from my house for FREE! A local radio station decided they were going to team up with the city of Orlando and put on a free concert! It was a fuck yeah deal!

I do not have proper winter attire due to the fact there is less than 1 week of winter attire weather in the state of FL. Based on previous experience, I was sure that if I spend too much time in the cold, my giant nose would become numb from the freezing* cold resulting in chilly boogers running down my face. To avoid the discomfort of snot face, I decided it was in my best interest to wait until about 10 mins before their set time, when everyone was fairly intoxicated, to walk over there from my house.

The stage set up was nothing fancy but the location was awesome! It was set up right in the middle of Orange Avenue facing the intersection of Amelia Street.

I was excited to see this band live. There was an expected older crowd which coincided with the older age of the band (they started in the late 60s). I was definitely a minority in terms of age but to me it felt good knowing I could appreciate music twice my age. At the same time, my freezing* attempt to see a band that I listened to as a kid, turned into a full blown people watching extravaganza! The transients had a fair presence, since it was a free show, anyone could get in. I know if I was a bum in Orlando, with obviously nothing to do on a freezing* Florida evening, I would have been at that concert too!

I met up with some (older) friends at the show, and yes, we looked into each others eyes and loudly sang  “I just wanna keep on lovin you.” The popular statement throughout the evening was “they still got it.” And what an accurate statement that was! The drummer still as flashy as ever, crossing his sticks as he crashed his cymbals. The singer still belts it out passionately like he wrote the lyrics yesterday, and the guitarists and bassist still know how to shred. A couple of them were still sporting the old school rocker bleach blonde hairstyle, but that probably isn’t too hard to do if your roots are white to begin with.

They’re quite the “pro America” band, in a good way. Simplicity can often be refreshing. One of my friends mentioned to me “I saw this band in 1983 and Tom Petty opened for them!” … That was before I was born. I guess I have   experienced friends.

The band closed their set with the classic “Ridin out the Storm” and acknowledged the freezing* Florida weather as “the storm”.  It was a fun show, everyone was drunk, except me, which again made for phenomenal people watching, even on the walk home.

*I say freezing because it was in the 40s and windy in FL. Yeah, that’s freezing to us.