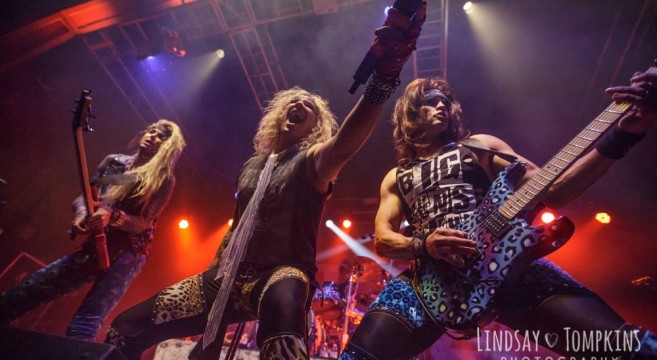 I felt like I had stepped back in time as I walked through the doors of The Beacham, amazed at the amount of fans who had dressed up straight out of the ’80s for the occasion. Steel Panther’s fan base has grown considerably over the last few years, mostly from word of mouth about their unbelievable live shows. I brought four friends with me who were all intrigued to see them just by hearing me talk about their shows so I hoped this one would live up to the hype.

As I waited for Steel Panther to take the stage, I could feel the anticipation in the air. The lights went down and each member of Steel Panther took the stage, launching right into “Pussywhipped,” the opening track from their newest album, All You Can Eat. Narcissistic bassist, Lexi Foxx’s hair blew through the air, thanks to a conveniently placed off-stage fan while he checked himself out in a mirror between songs. Within minutes of taking the stage singer Michael Starr confirmed that they were indeed banned from ever playing House of Blues Orlando again but they promised they wouldn’t censor their show because of the incident. With staples of their set lists like “Fat Girl (Thar She Blows)” and “(I Fucked) 17 Girls in a Row,” these guys show no signs of toning it down anytime soon. 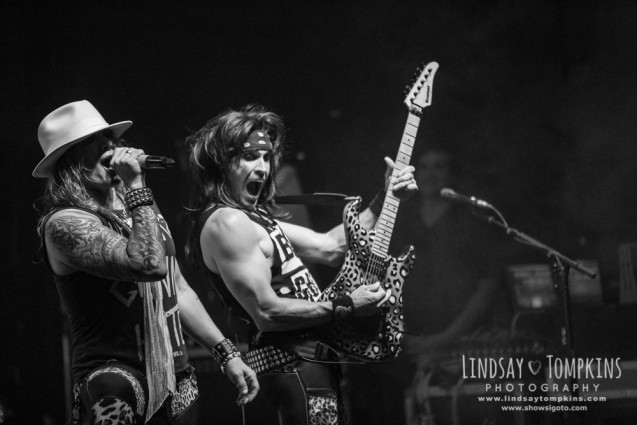 In typical Steel Panther fashion, they invited girls from the crowd up on stage to show some skin for their song “Gloryhole.” Most of the girls were more than willing to show their stuff, but for some of them it took some extra coaxing from the band (this is one of the main reasons they were banned from House of Blues).

Steel Panther may be considered a joke band of sorts, but the entire band’s musical ability is no joke at all. Axe-man Satchel brought a fan on who claimed to be a better guitarist. The results were almost painful as this guy had nowhere near the amount of talent and couldn’t even play the song. They slowed things down a bit, performing a stripped down versions of “Weenie Ride” and “Kanye”, their viral video ode to Kanye West (See video below).

Before finishing their set with one of their first original songs “Death to All But Metal,” we were treated to a drum solo by drummer Stix Zandinia, as well as a sample of their new “upgraded special effects” that consisted of two leaf blowers to blow Lexi’s hair in all directions. Steel Panther returned to the stage for an encore of two more classic songs, their obligatory power balled “Community Property” and the fan favorite “Party All Day (Fuck All Night).”

Steel Panther gave us a schooling on how to put on a proper rock show, renewed our faith in metal, and secured my spot at their next show.