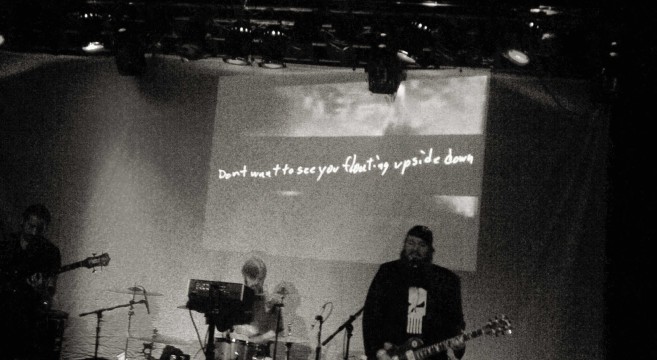 Apparently I’ve been living under a stupid rock for a decade because I’ve never seen Pinback live until now. I bought my ticket the day before the show. I got one of the last tickets before the show sold out. I was stoked.

These indie-rock wizards have been around since the late ’90s and have built a pretty decent and well-warranted “cult” following. Their most recent album, Information Retrieved, was released in late 2012 and is their first full length release since 2007’s Autumn of the Seraphs. This also marks the band’s move to the Brooklyn label Temporary Residence LTD.

People are often hesitant to listen to new albums from bands that take long breaks between releases; however, Information Retrieved has proven to be well worth the wait. It’s pretty fucking rad! If I had to pick two favorite tracks on the album they would be “Glide” and “Sherman.”

From my experience, most bands tend to lack in the visual aid department. Pinback is not one of these bands. They deployed miraculous visual projections throughout their set to coincide with parts of songs. They even had some of the lyrics match up on screen for certain songs. I love nerdy shit like that. Whenever artists add an unexpected element to their live performance, the whole experience stands out. They create their own environment and allow fans inside their heads. One of these songs, and probably their most popular song, was “Penelope.” I fucking love this song. It was written about a goldfish.

I managed to snap a pic during this song while the lyrics “don’t want to see you floating upside down” were displayed. Check it below. Go listen to it on Spotify or watch the aesthetically pleasing “Penelope” Video above. So pot brownies … Holy shit. I’m not much of a “smoker.” I’ve had edibles a few times before, but was never affected like this. I split one with my friend, thinking half-o-brownie wouldn’t have too much of an effect. I was wrong. Dead wrong. Within about 30 mins, I was ½ way through my first Pinback show, high as balls. I’m just glad I didn’t decide to have this the night before at the Kishi Bashi show …

One of my favorite songs by Pinback is “Fortress.” This was the most entertaining song they performed thanks to the lead singer, Rob Crow. Rob Crow is a big dude. He left the stage with mic-in-hand, ran around the room, hopped on top of the bar, ran around some more, and ended up back on stage doing a hilarious version of “the worm” on the ground. I honestly thought “is this guy fuckin’ with me?” Just watch the Fortress Video:

Rob and crew hung out after their encore, signing autographs and talking to fans. I love it when bands make themselves available. It’s really humbling and humanizes them. I got to shake his hand, thank him for coming to FL, and even got my record signed. 🙂

After the show, I bet you wouldn’t have guessed, I had a case of “the munchies.” I went and cured my case with an amazing taco from Gringos Locos. I say “amazing” because eating that taco was as good as (maybe better than) passionately hooking up with a love interest you’ve had for years — Sloppy, tearful, spicy, and I finished quickly. You wouldn’t have wanted to see it. I’m glad I didn’t do it in front of a mirror.

Pot brownie or not — GO SEE PINBACK. It’s an incredible experience. Keep up with their tour dates and music on the Pinback Facebook page. If you really want to nerd out, check out Rob Crow’s Podcast.