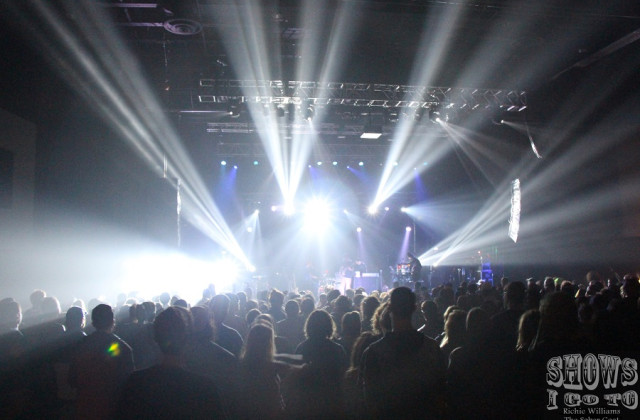 On Wednesday, January 27, Papadosio threw down the jams at The Plaza Live in Orlando, Florida while on their “Extras In A Movie: Act II Tour.” Plenty of jam fans showed up to get down at this mid-week show. In fact, as the Papadosio guys came back on stage for the encore, Anthony (guitar/keys/vocals) says,

Orlando! I am thoroughly taken aback to the amount of enthusiasm I’m hearing on a Wednesday night… thoroughly! We don’t really get to hang out that much but we’re really happy we’re here, thanks. The Mantras opened up the show to get things started. This was my first time seeing them live and they instantly made a fan out of me. They hail from Greensboro, North Carolina and even have their own annual music festival called Mantrabash. The Mantras have their own genre-defying music of electronica, metal, middle-eastern funk rock that will undoubtedly melt your face and make your body move. At times it seemed like they were melting their own faces. Here’s a highlight clip I managed to film during their set amidst all my body moving happenings. The last three minutes of the clip includes their set closer which was a cool cover of Led Zeppelin’s “Fool In The Rain.”

Papadosio are quickly becoming one of the hottest bands in the jam scene. From indie rock to electronic dance funk, they challenge genres while blending them with an accompanying light show. They captivated the audience with a long set full of songs from all five of their albums, including the newest release Extras In A Movie. The fans that show up to their shows are not only awesome for supporting live music, but they’re some of the friendliest in the jam scene. One need not feel uncomfortable dancing at Papadosio show. Everyone is feeling it just as much as the next person, so keep dancing like nobody’s watching and make friends with your neighbors.

Live art is also prevalent at many shows. Sometimes there is live painting on stage. On this particular night, I saw something I had not seen much before, and that is yarn art. There was a girl casting out beautiful spirits from the side of the stage as she wove together a colorful piece of yarn art on a canvas. I wish that I would have followed up at the end of the show to see the end result or at least the progress that was made throughout the night. Papadosio are masters of jamtronica who captivate your senses from the start of their show to the very end with spontaneous musical ideas created along the way. From soothing beats to roaring jams, they always deliver with funky bass lines and awesome audio engineering that definitely gets people moving and stirs some souls. I highly recommend everyone have a dose of Papa-D! Here’s my highlight video which includes various clips throughout the night, including one of my favorites, “Puddles for Oceans.”

I got a chance to interview Anthony and Billy over the phone the night before the Orlando show. They were in Tallahassee where they would be playing at Sidebar. I asked them about Aura Music & Arts Festival and why that after six consecutive years of playing this festival since it started in 2010, this was the first year they would not be on the line up. The simple answer was that it was just time to take a break and switch it up because they don’t want to over saturate it. This leaves room for other acts to play the festival, plus they have gigs booked out west.

For the Suwannee Hulaween festival last October, the band really liked how it properly funded people with ideas and art installations (they thought the dragon was pretty awesome) and it’s always fun seeing so many friends at a Suwannee festival.

I continued with the festival talk and asked them about playing Bonnaroo for the first time later this year in June. They went in 2003 or 2004 after they graduated high school and if you would have told them back then that they would one day be playing Bonnaroo, they never would have thought that and you could have called them crazy. They’re really most excited to see Pearl Jam at Bonnaroo.

For their new album Extras In A Movie, they envisioned the title as a concept connected to themes of interpersonal interactions and relationships.

The thought process in writing the album and were there any significant or direct influences was ponies, or mini-horses, that were grazing on the field across mixing room they were recording in that provided some visual stimulation.

There’s a track called “Epiphany” (which was originally going to be the self titled track Extras In a Movie but was eventually renamed) that has a line that goes “Anyone’s day a friend can save.”

Billy would go on and say that is doesn’t have to be a friend but it could be someone in your movie, your life can be a movie, and you yourself are an extra in people’s personal movie, and one line in that movie can really make a difference.

The first track on the album “Last Leaf” contains lyrics written by Billy’s dad and was originally a poem that Sam put to music. It’s a hugely metaphorical song and is a completely a cappella piece with reverberating voices. He said there is actually a tree in his dads backyard that always has one leaf on it, and sometimes one can consider themselves the last leaf on a tree.

As for advice for aspiring musicians, they said if you want it to happen, don’t stop, don’t lose faith, don’t lose hope, don’t deviate from where you started and remember your inspiration, be honest with yourself and you’ll come up with something original to help move music in a new direction.

As far as any side projects or collaborations going on, and apparently Rob has a side project band called Badger which I’m very interested to hear. I like to always ask if someone has a spirit animal, and coincidentally Anthony said his spirit animal was a badger. He then spoke for Billy saying his animal is wallaby, to which Billy replied he’s cool with that. They ended with a message for all their fans… “We love you!”

Listen to the interview here! The interview will also be featured in the next Shows I Go To Podcast episode (Episode 39)!

LISTEN to our PAPADOSIO INTERVIEW HERE