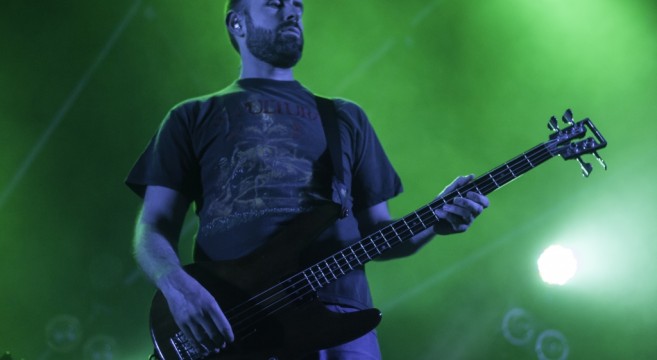 I first discovered Mogwai on a lazy summer day in 2000 lounging by the pool with my best friend. An Atlanta college radio station – 88.5 – was spinning a free-form show that highlighted the bands then 5-year catalog of progressive guitar driven compositions. As each track played, I awaited lyrics to debut as the guitars excelled and dominated each song. This music gave me new hope for progressive alternative rock that seemed to be fading out at the turn of the century.

I recall my friend stating that Mogwai’s sound could define this time for generations. “This is the new classical music” he said. I agreed. But after seeing Mogwai live 3 times over the last decade, I really get it now. Mogwai sheds a few Rock N’ Roll clichés. Their intro to the stage is unpretentious, transitions between songs are smooth and modest, and stage presence is upright with subtle movement. Mogwai came to Atlanta’s Center Stage Theater Friday, May 2, while touring their 8th studio release Rave Tapes. This release despite the allusive title and geometric artwork doesn’t stray too far from Mogwai’s familiar soundscape. There is a clearly a synthetic layer to this album, but Mogwai remains at its core a guitar band.

The audience in Atlanta was split even with teens to 30-somethings.  Mogwai fans feel the band is the best kept secret to modern music. However, Mogwai have nearly 2 decades under their belt. Much like listeners at a symphony hall, the audience at a Mogwai show listens tranquilly followed by an ecstatic applause after each score. Despite the band members approaching a midlife age, it doesn’t feel like the band is touring on the shoulders of their early work.  I believe it is the loyal Mogwai audience that will carry this band down for generations to come.

The above words and photographs below are by our good friend Brian Hadden, who recently caught Mogwai in Atlanta, GA. When he isn’t shooting concerts he is on the streets documenting Atlanta’s life style, you can check out more of his work here!