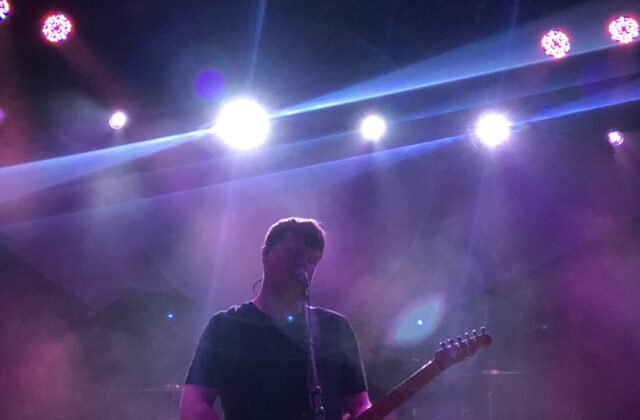 It’s 5PM in Atlanta and I have two beautiful beagles in my arms — Mabel and Sadie. Even better, there’s a pizza on the way from Siracusa’s. We Were Promised Jetpacks must love their ‘za too, because they’ve made Hot’lanta their southernmost part of their 34 city, international “These Four Walls Tour.”  I’ve hitched a ride up to ATL with my pal Justin and will return back home with a $38 flight I found to makes this adventure possible! 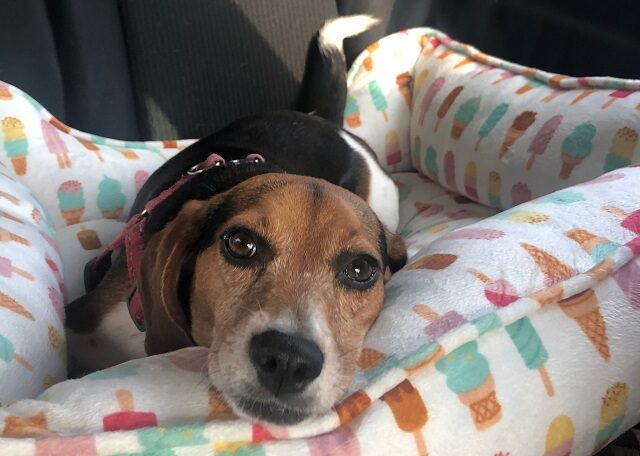 So, tonight I’m solo. Full of the best pizza I’ve had since being in NY, and driving a car out of my price range. Through security. Hit the bar, “PBR please.” “No PBR.” “Ok, what’s your cheapest beer?” “Budwiser is $6.” In the pit, now holding my $6 Dos XX to my chest like gold. The room is filled with strangers who, like me, found something special in this bleeding indie rock band from Scotland.

Now the opener — also from Glosgow — Catholic Action is killing it. Their witty guitar work is fucking brilliant. These punk and artsy vibes have me warming up quick like a little microwave. Their lead singer, Chris McCroy, shares that he spent last night drinking and then found out just how terrifying sleep paralysis can be! I, too, spent hours of my day in a car, hungover from last night. Thankfully, no sleep paralysis for me.

In a 2017 interview with NME, Chris McCroy says, “I did not want to make disposable music that meant nothing to me or the listener,” when asked about their debut album, In Memory Of. Their song “Propaganda” echoes that tone lyrically, “music to tick boxes … I will never be like you.”

My favorite part of their set is a rad new song, “unreleased.”  It has lots of group vocals and reminds me of The Fratellis or Vaccines, something crowds will bounce and yell around to. In the NME interview, when asked about their new album (release date TBA), McCroy says, “I want Kevin Shields [of My Bloody Valentine] to play guitar on it. I want to change what it means to be in a guitar band.”

He said onstage it’s coming out in February 2020. I sure hope so, if not sooner. Keep your ears up for this band, Catholic Action. 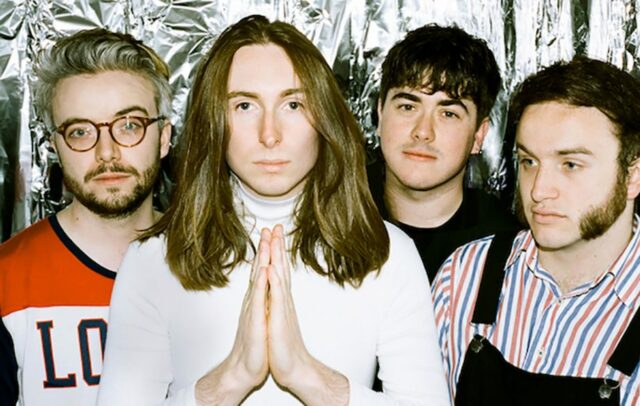 It’s been seven years since I saw We Were Promised Jetpacks at The Social in Orlando, FL with Bad Veins. They closed with their hit “It’s Thunder and It’s Lightning.” I was drunk. I loved both bands. I remember slapping the stage like an idiot, like electricity running through me. One of the best shows I saw that year.

Fast forward to tonight and We Were Promised Jetpacks of Edinburgh, Scotland opens up with a “It’s Thunder and It’s Lightning,” shaking the four walls inside Terminal West as well as every heart here.

This energy is what I came for. Adam Thompson is yelling like he’s out of fucks to give and his stage is true freedom — no one can take it. It’s hard to maintain this kind of energy over the course of ten years. But, like your favorite pizza place, they consistently deliver hot-n-fresh power. They pour out passion and intensity, just like the first time together, only a bit more mature. Here’s a shitty pic: 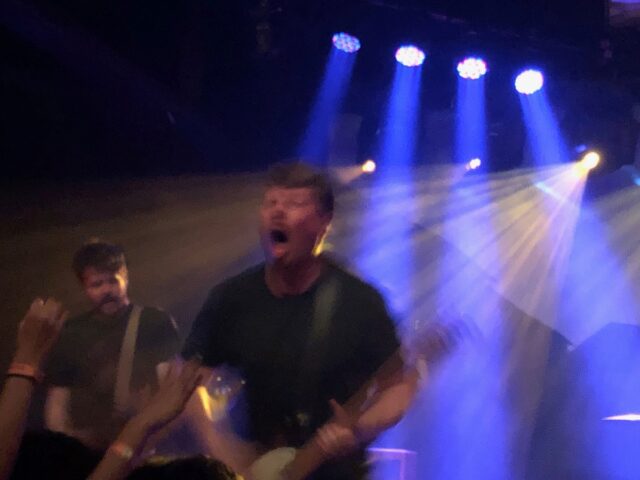 These Four Walls is one of my favourite albums. Each song is a different introspective journey. Everyone knows “Quiet Little Voices” is a banger, but I think it may be the least woke song on the album, lyrically.

I’m remembering words I thought I forgot in “Moving Clocks Run Slow,” and “Short Bursts.” I’m ready for the eight minutes of “Keeping Warm” which builds and builds and fills me up, eyes closed, till it spills the most beautiful truth.

“The chances of being born are so slim
So keep warm, so keep warm
And take some heart at being born at quite so young
You can learn to talk, and learn to walk in your own time”

They mention their friends, Frightened Rabbit, who are one of my favorite bands. This band set up an organization called Tiny Changes, in memory of the late Scott Hutchinson. Tiny Changes raises awareness for mental health. Frightened Rabbit just released a Tiny Changes album, featuring covers of FR songs from Biffy Clyro, Benjamin Gabbard, Julien Baker, Manchester Orchestra, Sarah Silverman, and more. You can learn more about Tiny Changes here. 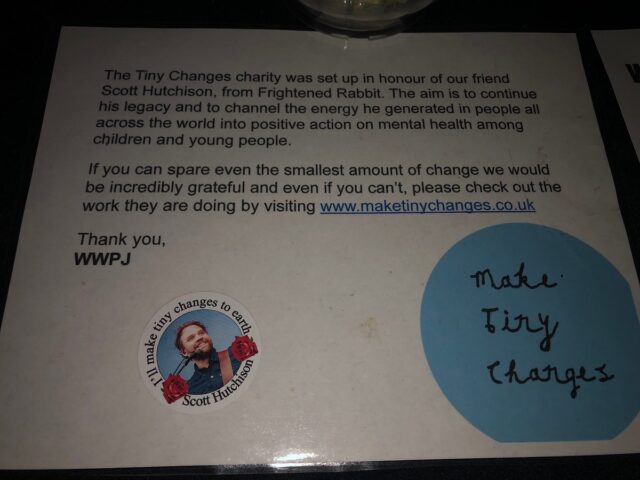 We Were Promised Jetpacks put out a new album last year, which I shamefully haven’t listened to much. It’s called The More I Sleep the Less I Dream and its title speaks to my soul. It’s so often I want to write some deep, sad, introspective shit like that. It can be very therapeutic to do so. I can already tell while reading some of the lyrics, this is going to be some good shit. 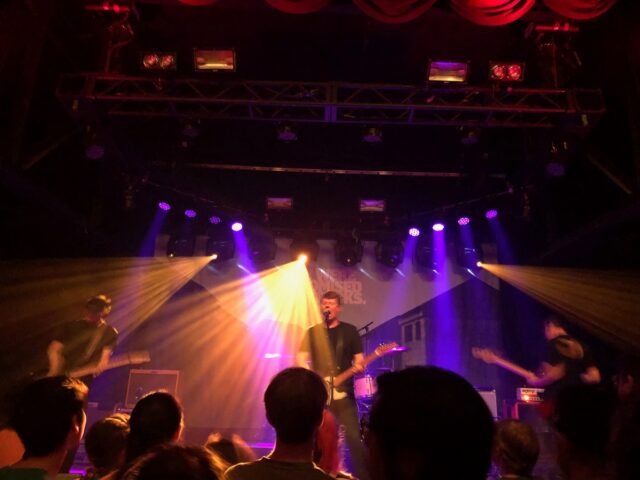 They play two tracks from the new album, nothing from Unravelling, and three from Pit Of The Stomach. We were promised These Four Walls, we got more, and they performed the fun ones — “these are some songs we really enjoy playing live,” Adam Thompson says. After donating to Tiny Changes, I dip out and realize I don’t have no clue where I’m headed. I spend ten minutes in the car Google Mapping the area where they live, find the park next to their house, add the destination, and make my way back to hang in the basement.

We Were Promised Jetpacks Live Review 2019 by Mitch.