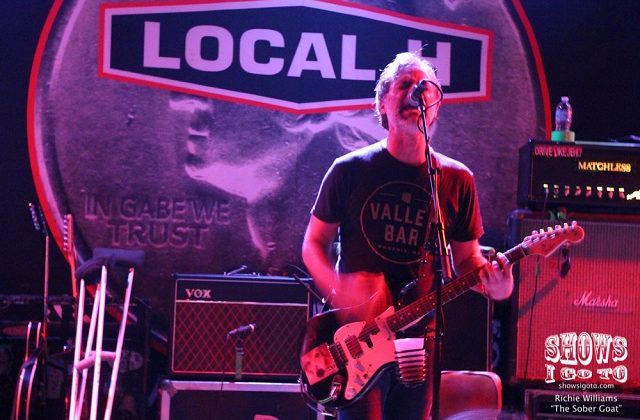 Occasionally I get the opportunity (in spoiled fashion) to attend more than one show in an evening. And by occasionally, I mean semi-regularly. It’s somewhat common among our crew here at Shows I Go To. [That’s why we all do this: we love going to shows. We love live music. We kind of live for it.] This is the story of one of those great nights.

The first of two absurdly good shows the evening of Monday, August 22 was at The Social. The night began with Local H, one of the best straight-up rock bands still faithfully carrying the torch of ’90s rock/grunge. I got to interview guitarist/vocalist and all around badass dude Scott Lucas a couple weeks prior to the show and consequently knew what to expect of the band’s game plan for the evening. 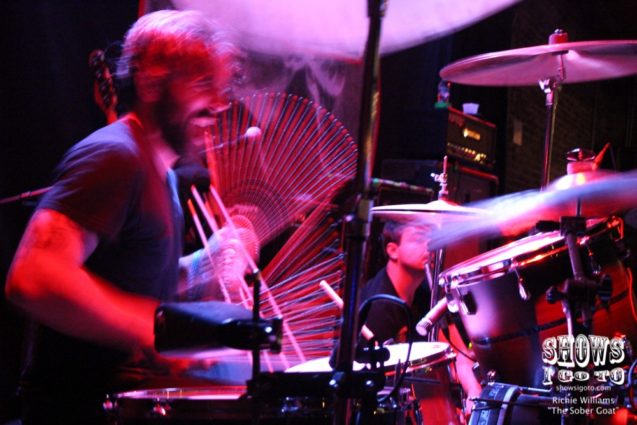 Local H is an Illinois-based two-piece comprised of Lucas and drummer Ryan Harding. Historically, Joe Daniels was the drummer from 1990-1999, and Brian St. Clair from 1999-2013. The band has a reputation for putting on hard-rocking shows that have some occasional theatrical elements and humor to them. An audience gets a unique and super-high-energy experience. The big thing this tour is that the band is touring with two drummers, current era drummer Harding and original drummer Daniels!

When I arrived, Local H was throwing down a meaty, chunky groove. And for a two-piece, it was loud. Not that lame, tiny loud you hear at a lot of rock shows. It was mean, big, and thick. They were playing various songs from the band’s deep catalog (comprised of 8 full-lengths, a live album, 7 EPs, and some compilations). Lucas was being himself: untamed, intense, and raw. Totally committed to putting it out there for everyone in the room. Harding’s drumming was relentless, tight, and effortlessly smooth. I was really getting into it when Lucas picked up a pair of crutches and pretended to limp off the stage as the band took their first break, roughly half an hour after I arrived.

After a surprisingly brief respite, Lucas (on crutches) returned to stage with Daniels. The room roared with appreciation for Joe, and rightfully so —  this guy drummed on several records that were not only wildly successful on the radio (how I discovered them in 10th grade in 1996!) but also endeared by their fanbase, which has now been around for over two and a half decades. 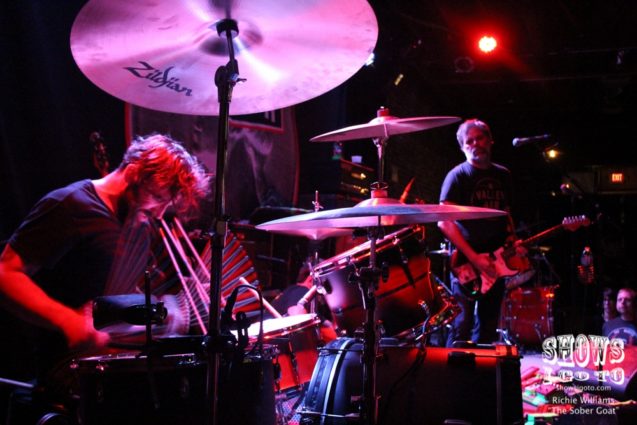 They didn’t waste any time jumping into “Manifest Destiny – Part 1”, the first yet brief track on their now 20-year-old album As Good As Dead. This tour, Daniels and Lucas are performing the album in its entirety: a major treat for all of the fans who have been around a minute. Daniels was playing the crap out of his drum kit. This guy hit hard. His playing definitely called up the nostalgia of bands I loved from the ’90s whose drummers believed in playing the snot out of their kits, much like Bryan St. Pere from HUM or Dave Grohl (please don’t tell me that I need to state who Dave Grohl played with). This set was filled with great energy and all out grunge vibes. The set did not feature the album play-through from beginning to end; rather, they restructured the track list to create a better show flow. For example, the album’s second song “High-Fiving MF” was actually the eleventh song played that night, perhaps saving the high-energy for later rather than sooner. My favorite songs from this list were “No Problem,” “Lovey Dovey,” and of course “Bound For The Floor.” Lucas again grabbed the crutches and hobbled off stage.

After another short break, Lucas gimped back up on his crutches with both drummers in tow and the trio immediately busted into the third and final set. It was apparent that these dudes were all loving it. There’s something about the primal pounding of two drum kits simultaneously that can’t adequately be described in type. You just have to feel the kick drums thump your chest to be able to get it.

Check out this video from the show, thanks to The Sober Goat, which has the entire “As Good As Dead” album as well as many of the other hits played throughout the night.

And while this was an absolutely amazing musical moment in my life, it was time to go. Outside of their breaks, the guys had been playing for two and a half hours, which was downright impressive in and of itself. But I had to leave in order to make it to the second show I was going to. Yes, it was that important.

I hustled to my car and high-tailed it over to Will’s Pub just in time to catch the most crushingly powerful three-piece you may ever hear: Monolord.

Hailing from Gothenburg, Sweden and comprised of Thomas V. Jager on guitar and vocals, Esben Willems on drums, and Mika Hakki on bass, this band is currently setting the tone (quite literally) in the DOOM genre. These guys may very well be capturing the sludgiest, most merciless molecularly destabilizing guitar and bass tones on the planet. And that’s not hyperbole.  I have personally seen Sleep, Torche, Earth, and Boris live in the last year. And while they all have incredible sounds of their own, Monolord has perfected the actual sound that a doom band can create. It simply destroys you. When you hear it live, you cease to be. It shakes every innermost part of your physical being, and you’re pretty sure it’s euphoria.

The set these guys played just leveled the crowd. Some people were just kind of standing there with their jaws a bit dropped, the obvious enrapture displayed on their face like a billboard for dumbfoundment. Other people, myself included, were right at the front grooving out as hard as we possibly could. Monolord laid down an entire set of the sludgiest sludge that was ever sludged. It was emanating from both Thomas’ Orange amp (running through a Marshall and Orange 4×12 cab simultaneously) and Mika’s Orange amp and 8×10 Orange cab. It was relentless. It was unforgiving. It was cleansing. There was nothing but the sound, saturating every cell in my body. My favorite performance of their songs that evening was “Icon.” It sounded so thick, I was pretty sure I was going to hear it in my sleep (I did). It may have been the heaviest groove I’ve ever heard.

Now the thing about this genre is that it requires an attention span to appreciate it. Doom (or sludge, or stoner metal, or whatever else you want to label it) songs tend to be in the 6-12 minute range. It’s not for those who require a 3-5 minute immediate gratification fast-food style song in order to enjoy it. It’s also rooted in slow-to-mid-tempo deep, deep grooves. The thickest, heaviest grooves. The genre’s founders, Black Sabbath, originated the tones and the idea to play at absurd volume levels with all the distortion you can muster. Doom’s modern bands have appropriately continued evolving the sound into new directions. As a poignant example, here’s my favorite track off of Monolord’s album Vaenir, “Cursing the One:”

After the show, I spent a few minutes talking to the band. (By the way, these were the nicest dudes. All too happy to talk music and hang out.) I asked them about how they came to get their sound and they explained that it was the result of Jager and Hakki spending a lot of time really dialing in their amps and pedalboards over the course of the last few years — the band has only been around since 2013. The results are evident on their newest EP, Lord of Suffering. (Check it out at monolord.bandcamp.com when you get a chance. Pure, devastating tones.  The bar has been raised.)

My night couldn’t have been more memorable or musically rewarding.  And to top it all off, I got this pic with Monolord: 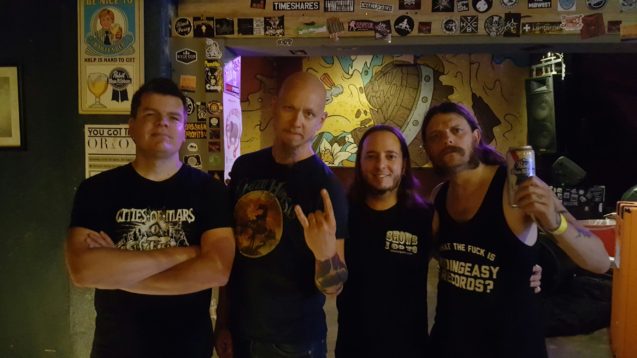 Sometimes I’m grateful for the experiences I get to have.  This was one of those times.