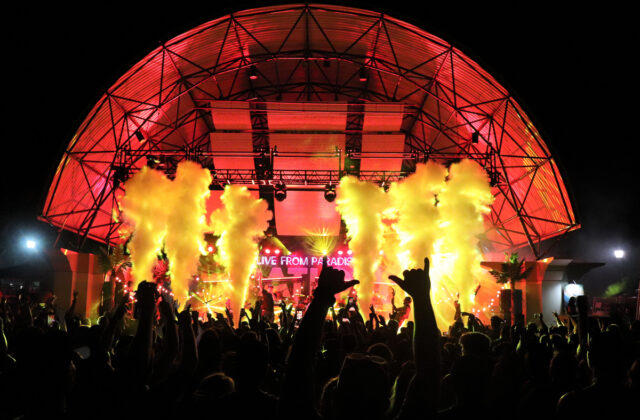 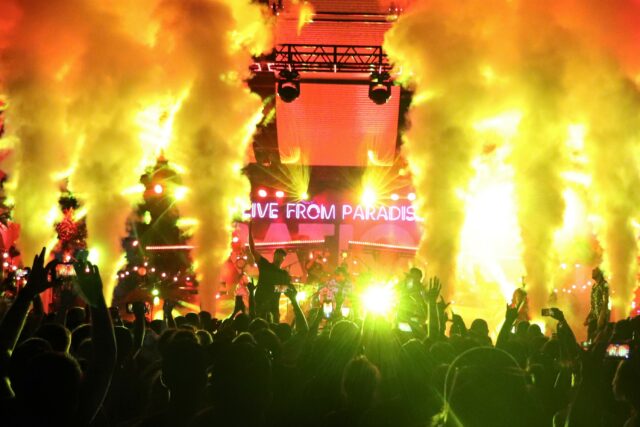 That is what a friend standing next to me said after Reggae sensation, Iration, finished their show this past Sunday at the beautiful Riverfront Park in Cocoa. Charged was the perfect word to sum up their set and the perfect ending to an awesome Sunday afternoon-evening listening to live reggae on the coast of the Indian River.

The story begins late afternoon in Orlando when two friends and I set off for Cocoa. Walking up to the venue, we hear the sounds of Fortunate Youth as they were in the beginning of their set. “Mary Jane” (the classic Rick James tune) blasts from the speakers, an excellent cover choice, instantly setting the tone for the rest of the day. We scoop our tickets from will call and head on inside. We arrive a bit late, missing the first act, Katastro (but Carolyn caught them here). Fortunately, we make it in time to see most of Fortunate Youth who gets the crowd hyped up with songs like “Love Is The Most High,” “Sweet Love,” “Pass the Herb” and “Burn One.” The charging has begun. 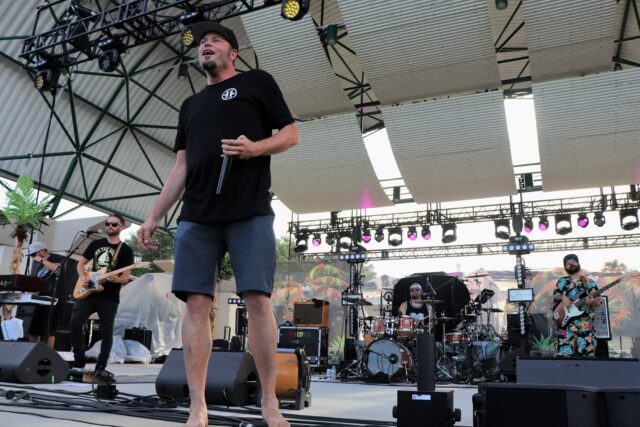 Next up are my boys from Kona Town, Hawaii … the one and only PEPPER! I’ve been seeing this Dub-Rock  three-piece since Warped Tour 2001. Back in the day, I saw them every time they came to town (or near town), and always enjoyed their hospitality allowing me hang out in the green room or the tour van/bus before & after many shows. Much mahalo! Here’s a picture of my friend and I with Bret Bollinger (bass) and The Coach (tour manager) at an after-party at Kelly Slater’s (legendary surfer from Cocoa Beach) brother’s house in Cocoa after Pepper’s show at Storm Club, circa 2002. 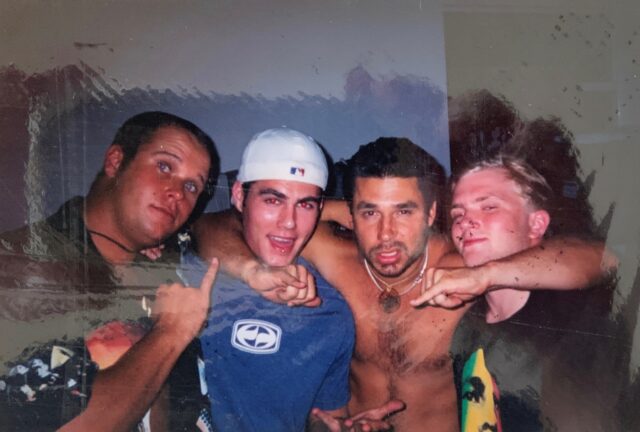 Pepper house party after their show in Cocoa, circa 2002. From left to right: The Coach (Pepper Tour Manager), my friend Matt, Bret Bollinger (Pepper Bassist), me.

Pepper always brings a high-energy show and makes their sets feel like you’re at a house party! The set starts with fan favorites such as “Stone Love”, “Ho’s,” “Boot” and “The Invite” (with George Michael “Faith” intro). Random comments are spurred from the stage during the music, such as “Yeah, spread that peanut butter and jelly!” 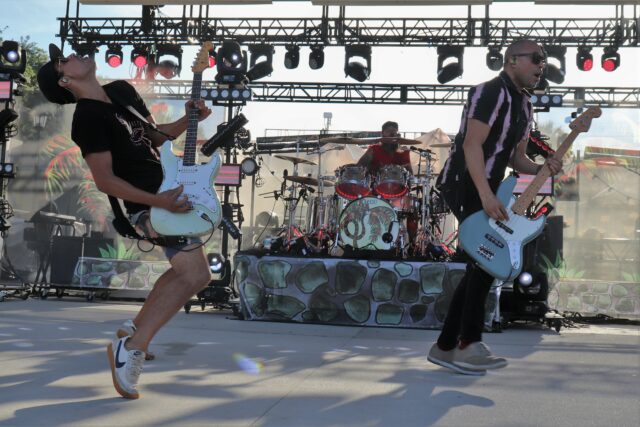 So, for the last few shows I’ve been to at this venue, this little kid (7-8 years old) is in the photo pit with a camera. Matisyahu let him on stage to shoot pictures during hit set back in June here at the Slightly Stoopid show. Pepper does the same and lets little man to shoot during several songs. 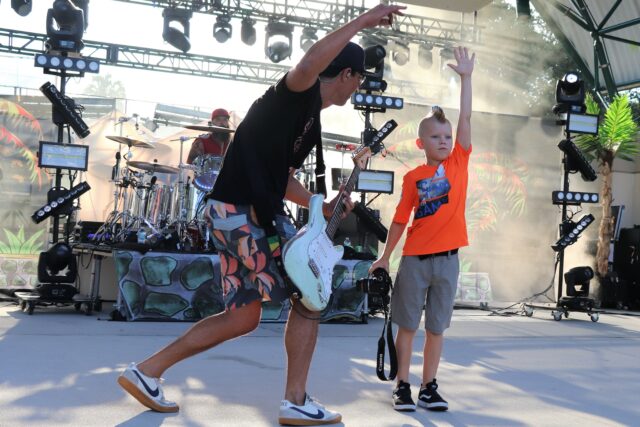 Pepper then welcomes the guys from Iration on stage for “Warning.” During one of the following songs, the band tosses out a bunch of inflatable alligator rafts to celebrate the tour stop in the Florida swamp. Pepper closes the set with the sing-along “Ashes.” WHOA OH WHOA OH WHOOOA!!! 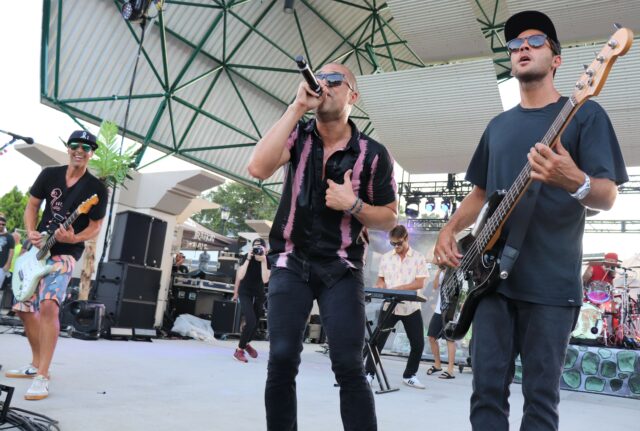 Pepper with Iration at Riverfront Park in Cocoa, FL on Sunday, July 28, 2019.
Photo by Richie Williams.

The time has come for Iration. Harking back to my opening line, the stage is “charged” and ready to explode as they open up with “Time Bomb.” A pink neon sign at the back of the stage reads “Live From Paradise!” For the entire show, the constant fog on stage is lit by neon color lights, fabricating a neon music grandstand, emitting a warm glow over the chill crowd. This creates a nice “charge” highlighting the show’s energy. 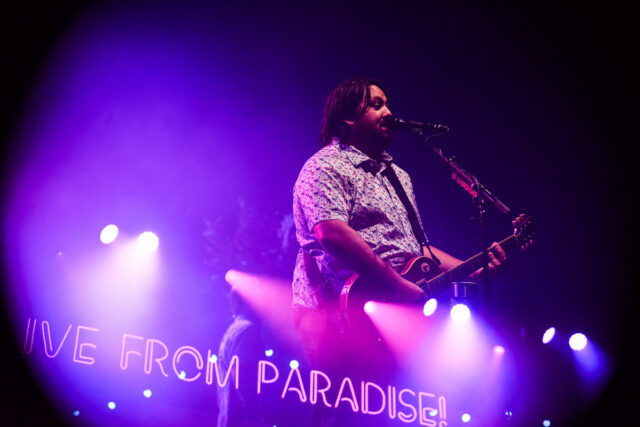 One by one, Iration powers through tracks including “Turn Around,” “Reelin,” “Automatic,” “Summer Nights,” and also Blink 182 cover “What’s My Age Again.” They also perform my personal favorite over the last year, “Fly With Me.” Iration’s approach to reggae is that laid-back smooth island vibe sound (seeing as they are from Hawaii). To end the night, they bring out members from all the other bands for their encore last song, finishing the night strong.

Like a bug approaching a zapper, I am charged. 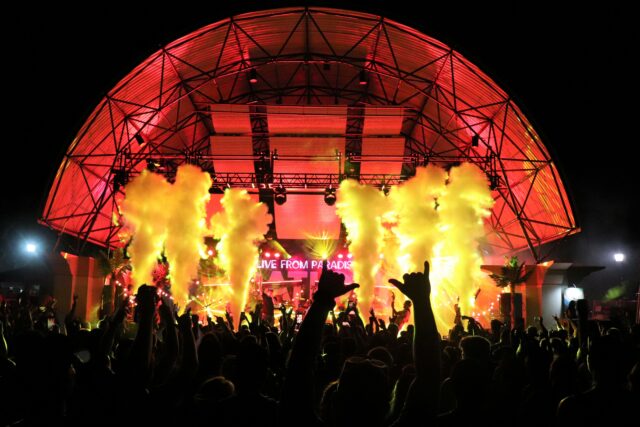