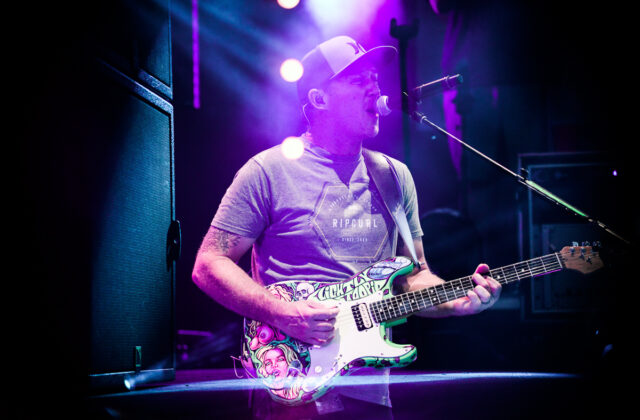 Cocoa Riverfont Park is a great place to forget about your troubles.  It’s a stormy day, so most of them will wash away by the time the music is over anyway.  One of the nation’s best Dub/Rock/Blues act Slightly Stoopid is in Cocoa Beach to melt away your troubles at their one-day Reggae festival that will also host Tribal Seeds, Matisyahu, and Hirie! (Note: Photos from Cocoa and St. Augustine dates below, this review is about our Cocoa adventure.)

The venue is awesome. There are plenty of food choices, and there is cover to get away from the sun and rain, but most importantly there is a great view of the water! I arrive to the show as the thunderstorms are nearly overhead. 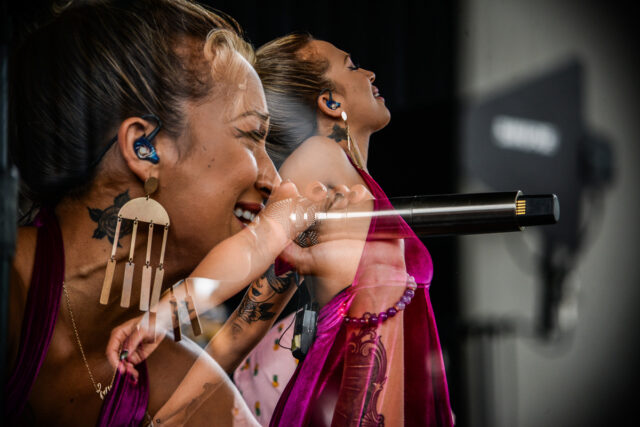 The rain lets up for a minute and Hirie takes her chance to come on stage and perform her positive Reggae music.  Last time I saw the Thai-born Hirie was at Reggae Rise Up with her full band.  Today, though, she is playing her acoustic guitar and is accompanied just a bassist.  Fans leave the safety of cover to come to the front of the stage and support Hirie.  Their intensity for her is only matched by the severity of the oncoming storm.  They only play three songs before cats and dogs start to fall from the sky.  It comes down hurricane style with huge gusts of wind from the ocean and lightning strikes within the half-mile.  Fans huddle together for protection and windbreak as the grass in the pit disappears beneath the rising monsoon.  Some fans, already soaked to the bone, entertain the crowd with backflips, cartwheels, and belly flops in the now huge lake in front of the stage.  The onlookers are delighted and let out a huge cheer for the best ones! 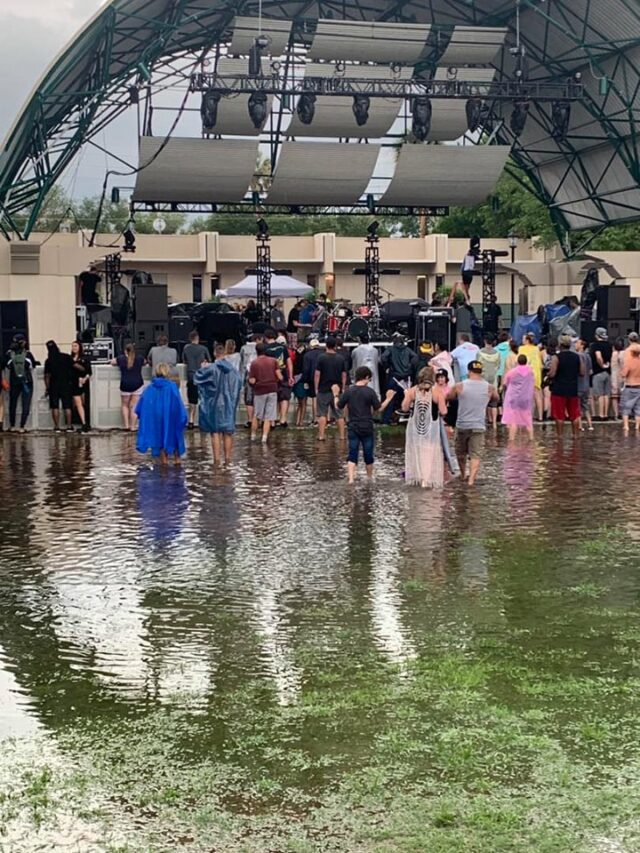 The rain clears, leaving the crowd and venue soaked.  Mud is now an issue and people step carefully when entering the grassy areas for Matisyahu.  Brooklyn’s premiere Reggae/Hip-Hop beat-boxer is backed by a great four-piece band.  He repeatedly thanks the crowd for being patient while they set up after the storm.  They start the play and bassist Stu Brooks can barely pick his bass off of the floor, it’s so fat.   A song in and they encounter technical difficulties with guitarist Aaron Dugan amplifier.  His sound goes out, but Matis and the rhythm section carry the team with an awesome impromptu jam session.  Drum solo, bass solo, then extensive lip service from Matisyahu, and repeat!  A couple times through and the crowd is loving it, when Dugan and his guitar join back in on the session.  “King Without A Crown,” “One Day,” and “Jerusalem” round out a great set! 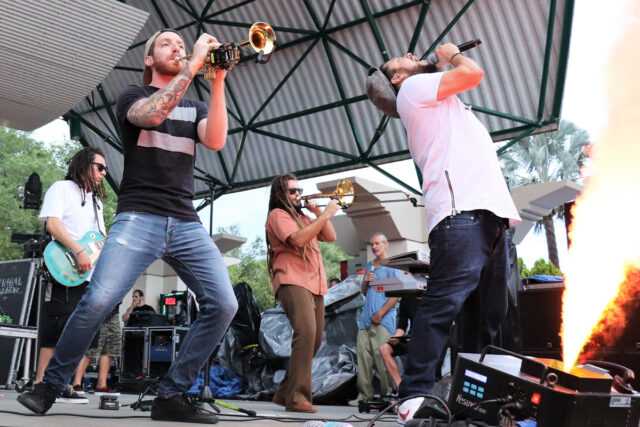 The sky is clearing and the venue is filling up with happy and hungry patrons excited to see some great music.  Tribal Seeds from California is up next to play some Roots/Rock/Reggae.  They have a full horn section giving the group a great authentic song.  At some points it becomes difficult to see the stage through all the puffs of smoke coming up from the crowd.  Suddenly both Hirie and Matisyahu come out and each have a turn to show their stuff.  Singing and rapping this duo is electric and the vibe is contagious, as fans scream and wave their hands in approval! 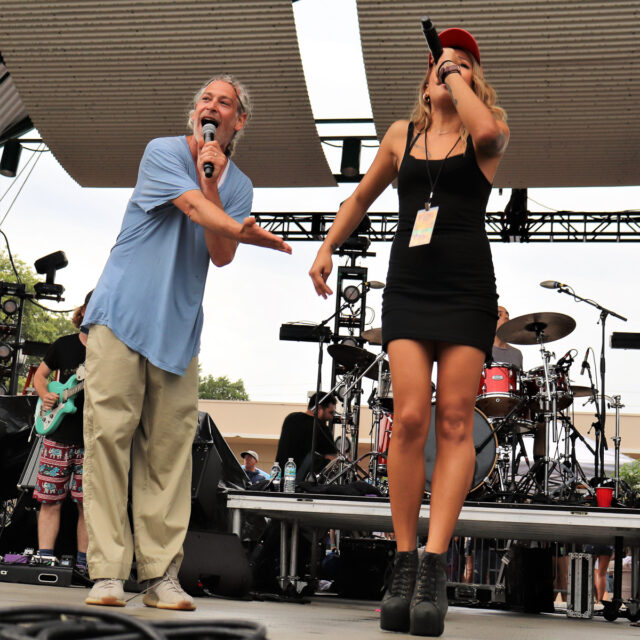 We were lucky enough to receive a couple of extra backstage passes and we gave them to our friends who had never experienced that before.  It was really cool to show them around and give them their first time adventure.  Although it is cool to say you’ve done it, the show is so much better out with the fans, where you can see and hear everything better.

Tonight’s headlining act Slightly Stoopid take the stage to huge applause.  They begin with the appropriate “Everything You Need,” which includes the lyrics —

“As I look outside it’s raining, pouring, Cats and dogs I want to do no more.”  Next, they get this party started with the fan favorite, “Officer.”

The sun is setting and the lights come alive, twinkling and buzzing.  Suddenly, there is big reunion of friends practically on top of me.  They hug and kiss and love on each other before realizing that I’m basically standing in the middle of their circle.  Spreading their positivity, these Reggae lovers formally welcomed me into their group! They play “Hold It Down” before they tribute the late Tom Petty with “You Don’t Know How It Feels.”  Keys player OG helps out on harmonica for the touching cover.   The crowd ignites when they start “The Fire Below,” and cover UB40’s “I Would Do For You.”  I grab a sausage to eat while they play the old school “Too Little, Too Late,” and then they bring out Hirie for “Mona June.”  They finish off the night with the first song off of the album Chronchitis, “Anywhere I Go.” 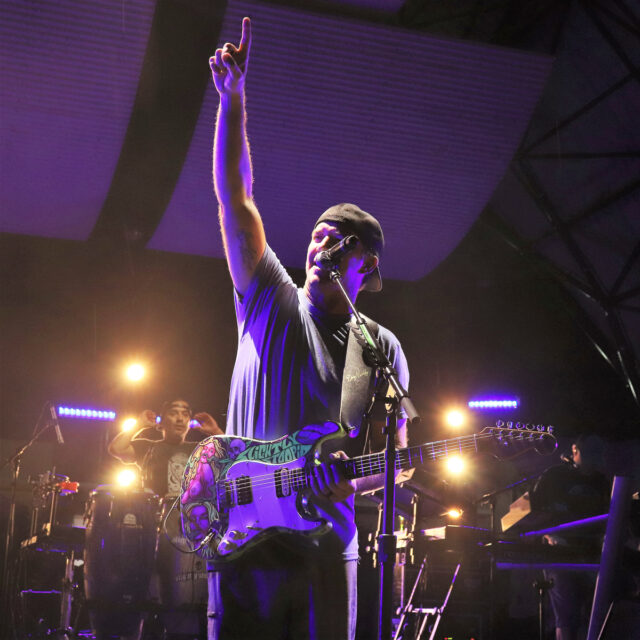 I leave the venue a little wet, but super happy.  Reggae music does great to soothe the soul.  Mix in a bunch of friendly faces and you have a sweet, albeit watered-down night!

Check out the photo galleries below!