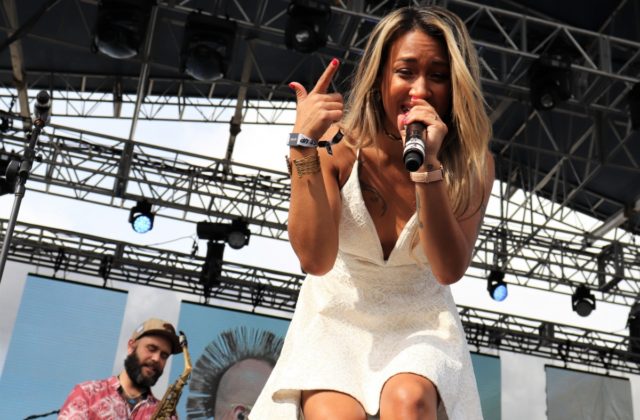 We weren’t able to make it to Friday’s music but heard really great things about Stick Figure’s headlining performance.

This time around, I’m attending the festival with photographer Richie Williams (The Sober Goat).  Our adventure starts on Saturday.  We arrive to the SOLD OUT festival just in time for Hirie. There are live painters on stage soaking in the sun and sounds and transferring it onto canvas right in front of our eyes.  “Hirie is a lifestyle choice, it’s about healing the body, the mind, and the spirit. Our fans and our band are always saying ‘let’s get HIRIE,’ it’s a way to detach from the painful complexities of the world, and bask in joyous energy,” says the band’s lead singer and sage who has taken the band’s namesake for her own.

Hirie is a lifestyle choice, it’s about healing the body, the mind, and the spirit. Our fans and our band are always saying ‘let’s get HIRIE,’ it’s a way to detach from the painful complexities of the world, and bask in joyous energy”

This 8-member band from Kaneohe, HI is high energy, and a ton of fun.  She, Hirie, is rocking a white dress and tall red shoes, while her guitarist, Blaine Dillinger, has a huge mohawk.  These guys even move in step and the crowd loves it!   She dances in the middle of the stage while Trombonist Andrew McKee solos to end the song “Give Me.”  They end the set by playing Zelda’s Main Theme.  I can’t help but walk away with a smile on my face. 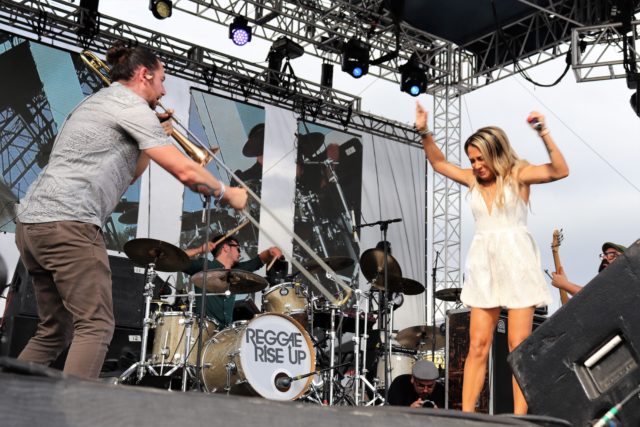 The ensuing set is J Boog.  We make our way to the SMKFLWR Stage, walking past lots of big art you can take pictures in front of, as well as people lounging in hammocks and on blankets.  I’m in a total beach scene as the smell of sun tan lotion and flowers waft through the air.  J Boog takes the stage with a super long intro.  A long instrumental that features their three vocalists with soaring sustained notes which remind me of the Cirque Du Soleil show I saw last week.  They drop into their music and its refreshing to hear reggae that isn’t solely centered on the bass guitar.  Harmonies and crowd control are the strengths of this band that features Jerry “J Boog” Afemata, a reggae singer of Samoan descent, born in Long Beach and raised in Compton, California.  The crowd is super receptive to their “Good Cry” music! 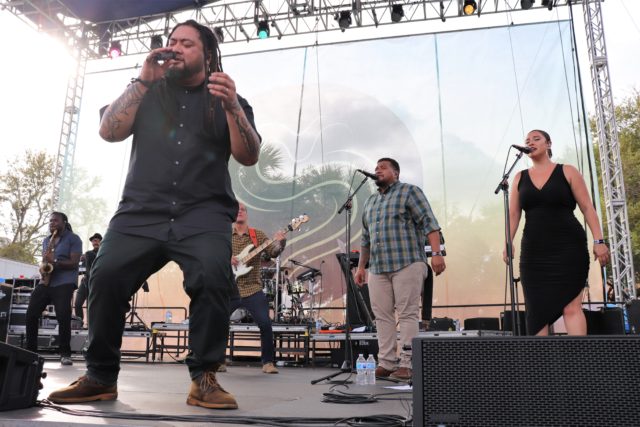 Ziggy Marley is on the main stage.  The population of party people is now all at one stage, crammed in to catch a glimpse of Bob Marley’s son.  Although I don’t know his music that well, I really enjoy his set.  I run into some old friends and we dance the set away in the blazing hot sun.  “Love is My Religion,” and Bob Marley Cover “Coming in From the Cold” are two of the songs that I recognize.

This is where things get a little shaky.  Method Man and Redman are up next on the other stage, but instead of coming out of their trailer on time as the only music on, they didn’t come out for 35 min while they let their DJ spin 90’s hip-hop to placate the musical masses.  When they did come out, they played “Let’s Get Retarted” and Wu-Tang hits and people started to have a good time.   But the fun didn’t last long as some fans left early to get a good spot for Slightly Stoopid. 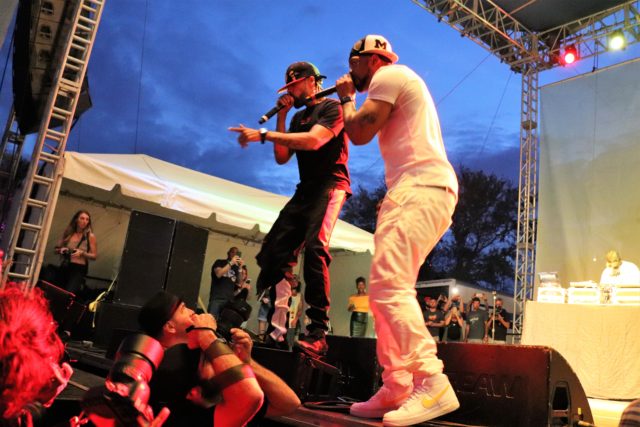 I journeyed to the more than ample food truck area, where food vendors from all over Florida were dazzling customers with eclectic fare.  I visited the local Cuban spot, Pepo’s, where I receive excellent service and better food.  They have everything you could want at this event: BBQ, Island, Asian, Cuban, American, Deserts, and much more.  This is one area where they have improved since my last visit to this festival. Now fat and happy, I waddle over to the main stage to get Stoopid.  I get a couple of high fives as I enter the crowd, people are ready to have a good time! 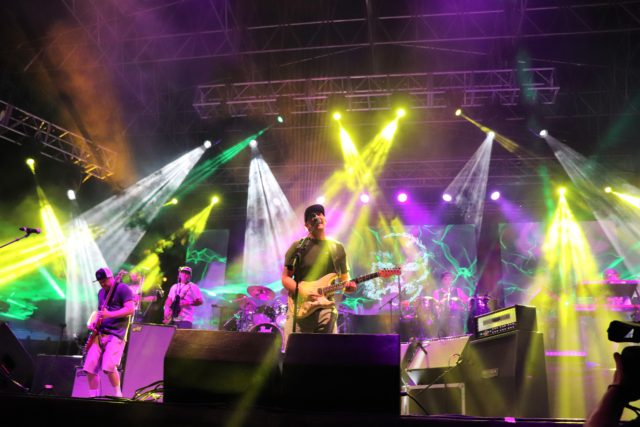 Slightly Stoopid is near the top of the list when it comes to current reggae artists.  Hailing from San Diego, California, this band as produced 13 albums, the latest being Everyday Life, Everyday People, in July of 2018.  They have come a long way from their punk rock roots in 1996, to sit  atop their throne of the surf, rock, reggae world.  “Where’s all my good-ass Florida weed at?” they ask, starting off the show right.

They play “Somebody,” “Ese Loco” before Chali 2Na from Jurassic 5 comes out and rocks the house.  His baritone voice permeates through the haze, there isn’t anyone who is able to escape his chill vibes during “Just Thinking.”  A long sexy intro for “2 am” has the crowd swaying and moving to the music.  This music makes me so happy we made the trip.  Slightly Stoopid knows how to put on a great show.  They start talking about Don Carlos (Black Uhuru) of Kingston, Jamaica.  He is a pillar of Reggae music as both a singer and composer.  Then, like magic, he appears, and in style: wearing a black discoball blazer that you could probably see from space.

They perform a song and while that is going on, the camera keeps showing Cocoa, Stick Figure’s Tour Dog on the screen.  A harbinger of reggae music to come as Stick Figure joins the pup on stage to help Slightly Stoopid and Don Carlos out with “Too Late,” but only after Don Carlos exclaims to the crowd that he’s been smoking pot since his was twelve and has never been to the doctor.  “No One Stops Us Now” is our last song of the set as we disperse in to the night.  St. Pete bars and back porches alike, buzzing about the great day of reggae on the water. 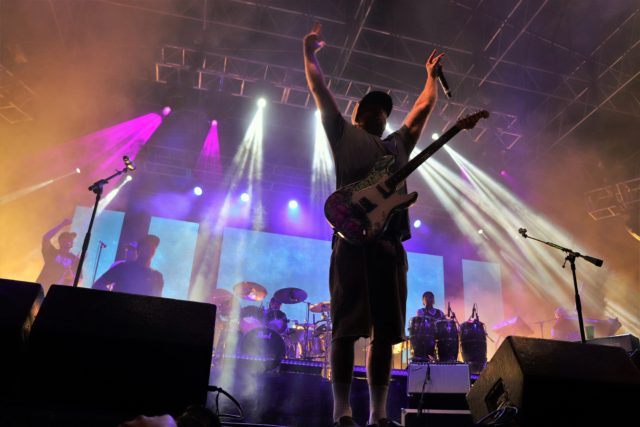 We stay with friends nearby.  They are such great hosts, big breakfasts and Planet Earth are an awesome way to start our Sunday.  We arrive on Sunday to an overcast and slightly rainy Vinoy Park.  Fortunate Youth are the first band we catch and they are a ray of sunshine!  Fortunate Youth is an American reggae rock sextet from Hermosa Beach, California.  I love that they put percussionist Travis “Travi Bongo” Walpole right at the front of the stage.  It’s fitting he’s upfront because they play “Earthquake” and “Reggae Radio.”  I break from the music for some food before returning to see Ryan Gonzo from Tribal Seeds join them on stage for “Sweet Love.”  Super stoked about seeing them!  What a great set! 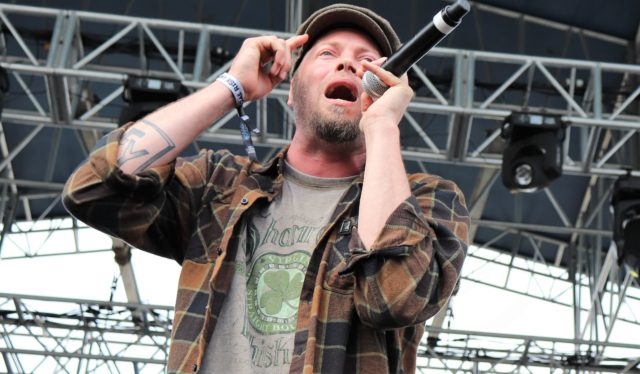 Iya Terra is getting started on the side stage and they are awesome.  Right away they have big guitar solos from lead guitarist Nick Sefakis and show that reggae can be about more than just the bass.  Iya Terra is from Los Angeles and they are uplifting and positive with their lyrics.  Continuously telling the crowd how grateful they are in the lyrics of “By My Side.”  They tease a Pink Floyd song with a “Breathe” intro into “Moving On,” a collaboration with Jesse Royal.  The whole crowd has two fingers “out for Babylon” as the song requests.  The sprinkling rain starts to fall as the set comes to a close.  They finish up with “Stars” while we walk away towards the other stage. 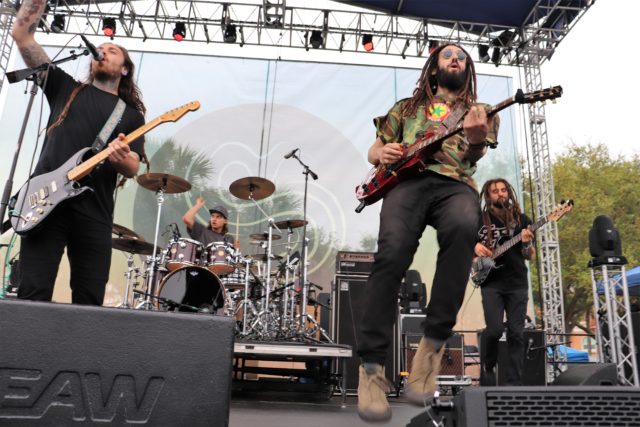 We arrive at the main stage for Tribal Seeds.  They have a rock side to them with crunchy licks from the guitarist Ryan Gonzo, who is back on stage impressing, this time with his guitar instead of his voice.  The song takes a left turn and goes full rock with a 30 second snippet of Rage Against the Machine’s “Bulls on Parade.”  Their horns are blaring for “Rude Girl” and the crowd gets really loud for the singalong, “In Your Eyes.”  Bob Marley’s “Iron Lion Zion” is their next song and they have officially taken this Reggae Rise up to the next level.  This party is in full tilt and people are getting down!  They continue the covers with Mark Morrison’s 1996 classic “Return of the Mack.”  There isn’t a still person in the park, as everyone is have a blast in the bay.  Finishing with “Vampire,” Tribal Seeds bring the heat and set up for a big finish from Rebelution. 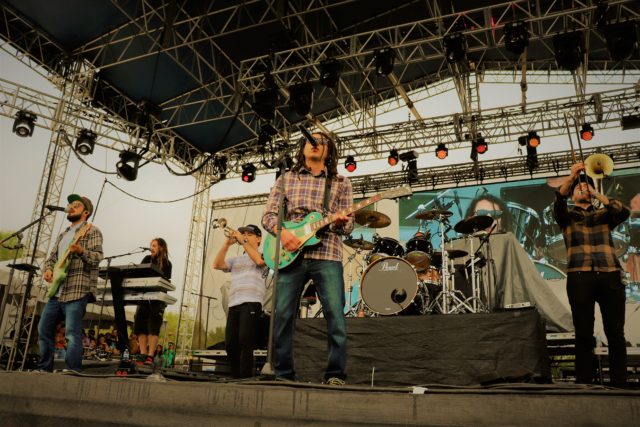 Anxious to get to Rebelution I almost forgot about roots, folk, and reggae artist Trevor Hall!  After a long dramatic intro, Trevor Hall comes out on stage to a big applause from a smaller but enthusiastic group.  He opens with “Green Mountain State” from his 2014 album Chapter of the Forest.  Soon after, a full band joins him on stage: a stand up bass guitar, electric guitar, and drums.  All of a sudden the music stops with a LOUD POP! Oh no!  The band tries to play on, but its clear the music isn’t coming back for a bit.  The crowd isn’t phased though.  They cheer and whistle for the band while the lights dance around as if to holler themselves.  Luckily it’s only a minor snafu, the band starts up again and people can go back to emotionally connecting with their man Trevor.  One girl near the front is even “ugly crying” with her friends as they all group hug, sway, and dance to the sounds of the uplifting Trevor Hall. 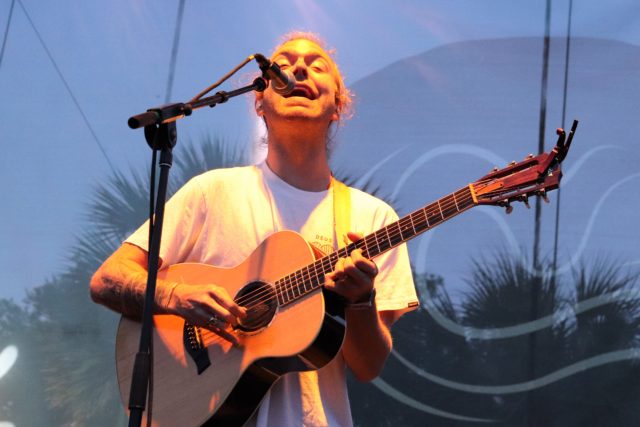 Finally, I make it to Rebelution!  Originating in California, Rebelution is revered far and wide.  They start right on time with “De-Stress.”  “Inhale” and “Lay Me Down Easy” are on deck for my favorite set of the weekend.  Not only because I love Rebelution music, but I also took the last 20 min of Trevor Hall to wait in the long doughnut line and now I’m chowing down on a couple of hot, fresh, gourmet doughnuts from The Little Blue Donut Co. Cue the Homer Simpson drooling.  We dance the night away with hit after hit including, “Sky is the Limit,” and of course; “Safe and Sound.” 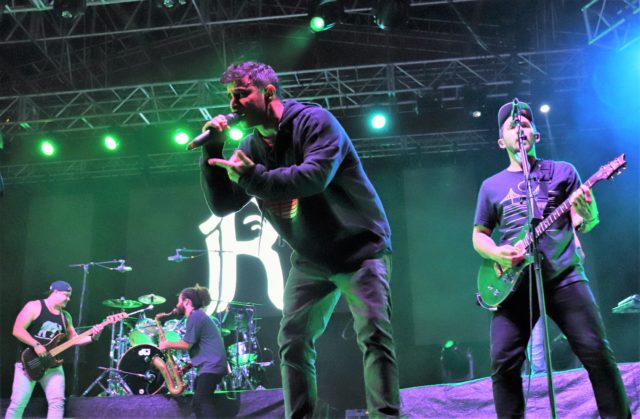 We make the long walk back to our car, singing the songs of Rebelution to each other as the rain starts to fall harder.  Just a few hours drive back home and we will be in our beds, “Safe and Sound.”

Thank you Reggae Rise Up for another amazing year.  Thank you for continuing to strive to improve the biggest, and baddest reggae festival on the East coast. 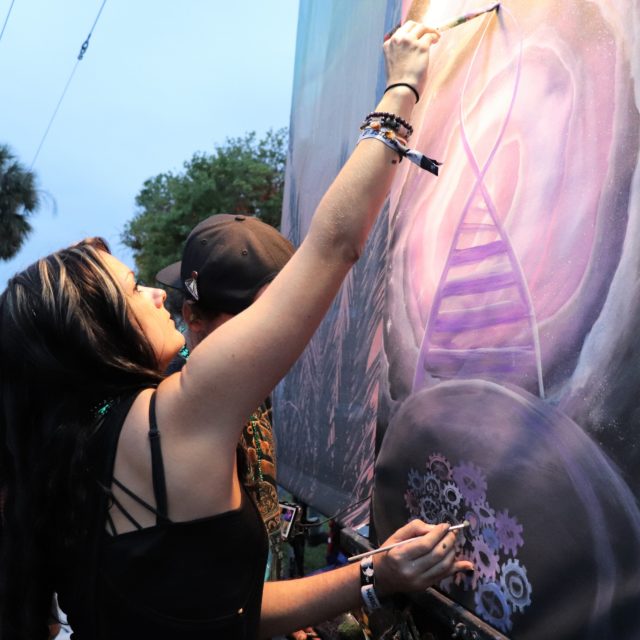