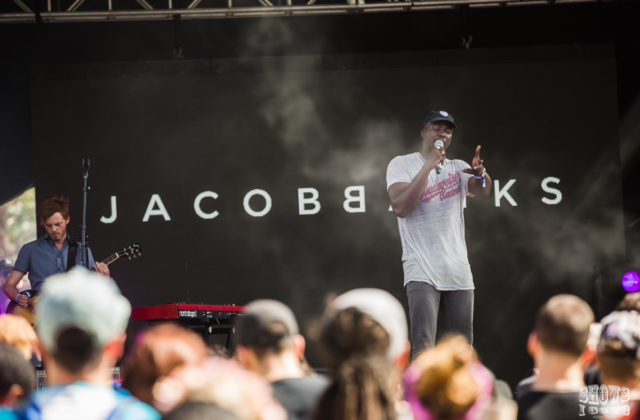 Jacob Banks is larger than life. I thought perhaps it was the audiences’ view from just below the HERE stage which granted the artist such heights, but upon sitting down with the singer-songwriter, it’s clear he most certainly sees things from a different perspective.

A whispered breeze ruffles the artist’s gray t-shirt as smoke swirls from stage right; the wind is the only relief from the Florida sun and its content victims. However, everyone was soothed by the powerful husk of the Birmingham born singer. Not one complaint. Just small sways and loud hands. 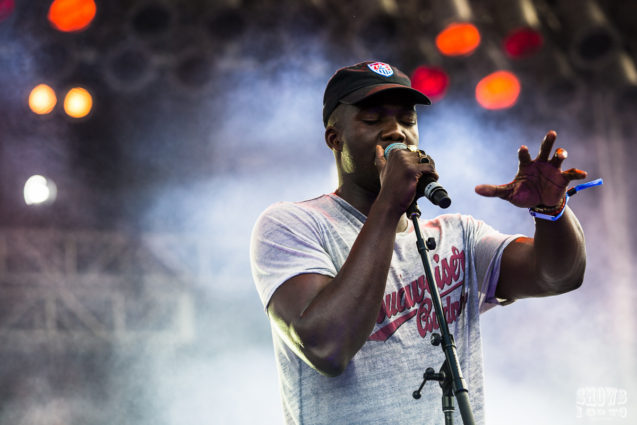 The media tent is a slight relief from the temperatures outside. Banks is seated close enough on the couch for the perspiration on my palms to pick up. The leviathan of R&B, who swooned an entire field of people only an hour ago, is within reach and now it’s time to find out just where these soul-driven songs come from.

“I don’t know how I’m here. I never had a choice. I graduated from Uni(versity) to be a civil engineer and I use to do open mics for fun and my friends wanted to go. And then people would be like, ‘oh, where can we hear that song?!’ And I’d go to my friend’s house and record it just so people could listen to it and they’re like ‘okay do another one, now do an EP.’ I’m just here because people keep booking me for shit.“

Hard to believe the 24-year-old could be so casual about a talent which ignited attention in 2013 with the debut EP Monologue. His approach to the writing process is equally laid back.

“Typically, I don’t write unless I have something to say. I’m not someone who just sits in the studio; seems like a waste of time. I could be doing many, many other things. If I don’t have something to say, I just don’t say anything. If I do, then it will come out. I like to work towards a project. All these stories I have are so important to me, so I don’t just want to sit in the studio trying to write.”

The artist is intimidatingly direct. I made a point during his set to jot down a lyric from the crushing ballad, “Unknown.” “It’s your time to talk and I’m listening.” It was simple honesty but there was a stark recognition of self in those words when they met the sticky air that afternoon. For Banks, its clear the music is less about personality and more about being personal.

I saw a quote the other day that says, ‘Whatever happens in your life is your story. If you wanted it to look differently, you should’ve acted better.”

“It’s my job to tell my story. If you’re a prick, I just tell what happens. I could be a lot worse,” Banks says without a trace of ego. Music can often be filled with passive aggressive messages but what Banks offers is a raw portrayal of what he sees, even if he’s the one to blame.

“Sometimes, most times, it’s my fault. I always acknowledge my role. I was never forced to be with anyone, so anyone I chose to be with I make a part of my story. I try to be as fair as I can.”

Bite without bitterness is a rarity. It’s also an important art form on today’s rocky political ground, especially for an artist who is trying to focus on staying stateside these days. When pressed about where he sees his role with music during these divisive times, again, the artist spoke with a calming confidence.

I think it’s important. I released a song a couple weeks ago called “Unholy War” and it talks about that and it’s about cheering on the oppressed and asking them to keep the faith alive. I think it’s necessary. People need to be reminded that they’re the shit and it’s your job as an artist to keep the people going and good people fighting the good fight; keep people marching forward.”

With an EP coming out this April, The Boy Who Cried Freedom, Banks has stayed busy writing, recording, and scheming all the while away from his home in London. 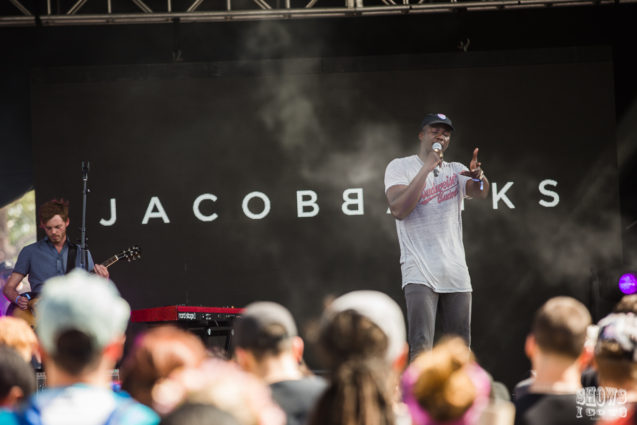 Being quick on your feet and level headed is important on tour. It’s funny though, I suppose I thought of Banks as the fire starter, given his afternoon set. Gray clouds are broken by his six foot something frame as festival goers created chaos at his feet. The atmosphere was buzzing. Festivals can be a mixed bag of dedicated fans and distractedness. How does an artist make the most of such a setting? 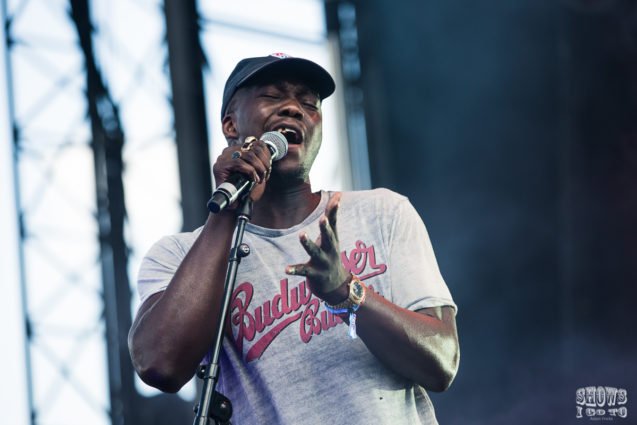 I glance just above the artists own gaze and remember I had made a mental note to ask him about the US Soccer Federation hat he was sporting, (although, I quickly wished I had not.)

“I support the US Men’s National Team because they did incredibly well in the last World Cup. I’m a fan of passion and I remember watching the World Cup and thinking the US team had so much passion.”

“That’s weird. I support every team apart from Arsenal.” 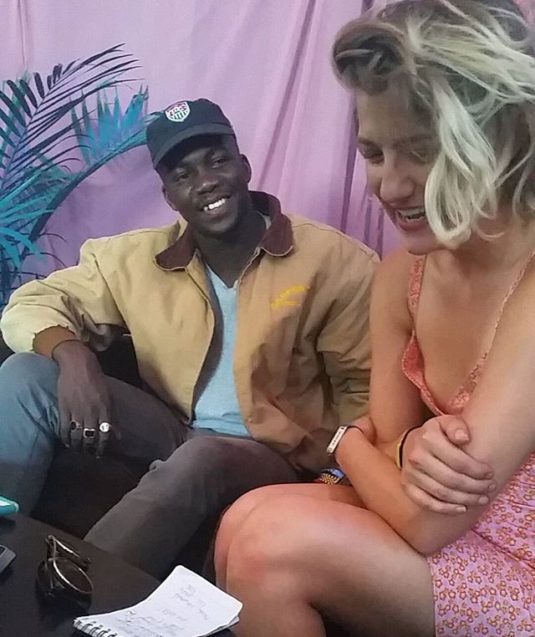 Sometimes you just have to laugh at yourself.

“Are you not an Arsene Wenger fan?” (The team’s longtime notoriously shaded manager.) I don’t know how to let things go.

“I just think they’re shit. They think they’re great and they’re really not. Its the same thing every year… they play really well up until about December. I think for me it’s the lack of honesty the Arsenal fans have. ‘Arsenal are better than Jesus.‘ Accept who you are. This whole thing like, ‘we’re the best team in the world’, like mate, you’re really not– by a long stretch. Until they come to their senses, I will always be anti-Arsenal.“

My face became as pink as my dress.

His delivery is straight stone but his smile is warm. A perfect combination of gracious, yet brutal.

“I can’t believe I’d never seen it. I was so bored in LA in November and I saw The Office and heard everyone talk shit about it but I just never got around to watching it. In the UK, you can only get the UK version and in the US you only get the US version, so I started watching it and I fell in love. I think it’s hilarious. The UK one is painful but it’s more like you feel sorry and you don’t know whether to laugh or not. I love Dwight. He’s genius.”

And when he’s not watching pranks between Jim and Dwight, he is on the hunt for new music, always.

I’m more of a musician than I am an artist and I’m always saying to people, if I could choose between making music or listening to music, I would choose listening to music because I’m more of a fan of music itself and this is something that people just keep asking me to do. But I love music more than anything else in the world. I really like Daniel Ceasar. He’s from Toronto. Rex Orange County. Lots of Afrobeats from the UK, Wiz Kid, it’s very eclectic.”

Music begins very organically for the artist and is bred only out of necessity.

“Writing for me is more like trying to remember a song. I feel like songs already exists and artists are just the people who go to pluck them from a tree. They’re already there. That’s why songs sound so familiar and you’re like, how has no one ever put this out before? Writing for me is just about staying open and allowing myself to be a vessel. And it just comes from me, but I don’t really think I’m responsible for it because it’s like, I’m a prick, there’s no way. I don’t deserve to write songs.”

I attempt to assuage Banks with praise, but it’s not sympathy he seeks.

“I love expressing myself. Like for me, if I wanted to put the pen down and do a cooking show then I would do that. Everyone needs that as human beings, in whatever capacity. Even fucking psychopaths need an audience. Everything’s a show. Everyone needs a way to be seen and as long as I have a way to spill it all out, then I’m going to use it.”

Maybe the UK crooner will have his own show on the Cooking Channel in 2018. Maybe he’ll put music aside for a while, focus on a different craft. Selfishly, though, I cannot be alone. I hope that’s not true. It would be with a wry smile and knowing nod that I would have to secede any argument against this kind of career move for Banks, though, because to spend more than five minutes with the musician is to know true gut instinct. A recognition some people never come across in their entire lifetime. 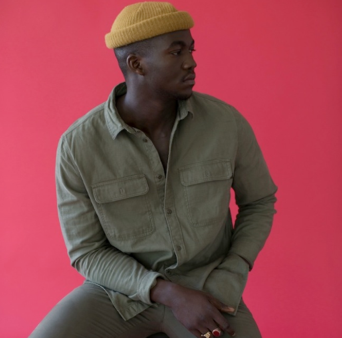