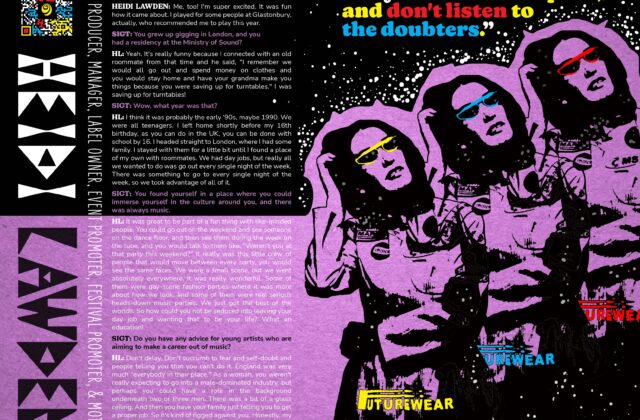 SIGT: How’s it going today? I hear some birds chirping in the background.

Heidi Lawden: Yeah, I came and sat in the sun. I’m in my garden because it’s nice and warm out here. I’m taking in the sun while I can.

SIGT: That sounds lovely. Yeah. I’m here in Florida and it’s so gloomy out.

HL: I’m so excited to come to Florida. I’m a Brit so there’s a lot of Florida fun jokes that people make about it. But I love it.

HL: I love Miami, I think because for so long I was landlocked in the US waiting for my green card. So if ever I wanted to travel and feel a little different, Miami would be a good call for sure. It’s like everywhere else just feels like America. But there was something about Miami that felt like maybe I’d gone on an actual vacation.

SIGT: Florida is like that as a whole. We should be our own country for many different reasons. I’m so excited that you’re coming to Florida and going to be performing this year at Okee.

HL: Me, too. I’m super excited. It was fun how it came about. I played for some people at Glastonbury, actually, who recommended me to play this year.

SIGT: You’ve had such an incredible career, and it’s been so exciting for me personally, just doing my homework and researching and learning all these cool things about your life and about who you are and how you’re a mother. You and DJ Harvey had your son many years ago now, right?

HL: Yeah, definitely way I get younger than I maybe should have been. But I just had that motto, if you’re going to do something, do it really well. Be the best that you can be at anything. That was something that my grandma instilled in me. So I am just very motherly and maternal, and people would say that about me, and I didn’t really realize it about myself. And as I’ve gotten older, I’ve appreciated them more because I’ll take in any stray dog or any straight human. It goes all the way through to how I feel about the parties that we throw. I become like the motherly person that takes care of harm reduction, making sure that water is free. I just have that instinct, and it’s worked out really well for me with having my son and carrying it through to how I lived my life. But it was a different world back then. People talk a lot about the industry being very male dominated, and it was, so the existence of my son was something that I didn’t really bring into my professional life. I kept him very removed from that world until he was a little bit older and really into music and wanted to come to everything.

SIGT: And now he works with you?

HL: He does, yeah. He’s the Wise Owl of the family business, we like to say, because he’s just very calm, quiet. He’s very healthy and just has a great take on things. He’s grown up around myself and other women that have worked in the music industry. And one of my other really dear friends managed a huge DJ and he’s obviously sucked up our little pearls and converted them into his own knowledge. He’s really smart. We run everything by him.

SIGT: So let’s start from the beginning. You grew up gigging in London, and you had a residency at Ministry of Sound?

HL: Yeah. My first foray into clubs was first as a clubber, and that was more like the fashiony, Western parties. Then I progressed to being a door girl. I was the mean girl on the door. It’s really funny because I connected with an old roommate from that time and he remembers so much more than I do. He was just like, “I remember how we had day jobs. I remember we would all go out and spend money on clothes and you would have your grandma make things because you were saving up for turntables.” I was saving up for turntables. I always had this dream. I just liked DJing in my room and some of my friends. The first club I ever played was a place in South End because my friend, who was originally from there but lived in London now, was offered a Friday night. I would open the night there and then he would play after me and that was my first ever DJ experience.

SIGT: Wow, what year was that?

HL: I think it was probably early 90s, maybe 1990. We were all teenagers. I left home shortly before my 16th birthday, as you can do in the UK, you can be done with school by 16. I headed straight to London, where I had some family, and I stayed with them for a little bit until I found a place of my own with roommates. We had day jobs, but really all we wanted to do was go out every single night of the week. There was something to go to every single night of the week, so we took advantage of all of it.

SIGT: And you should, especially when you’re in a place where you can immerse yourself in the culture around you, and there’s music.

HL: Yeah. And we all just did it for fun, for free. It was just to be part of a fun thing with like-minded people. You could go out on the weekend and see someone on the dance floor and then see them in the week on the tube, and you would talk to them like, weren’t you at that party this weekend? It really was like this little crew of people that would move between every party, you would see the same faces. We were a small scene, but we went absolutely everywhere. It was really wonderful. Some of them were gay-scene fashion parties where it was about how we look, and some of them were real serious heads-down music parties. We just got the best of all the world. So how could you not be seduced into leaving your day job and wanting that to be your life? What an education.

SIGT: You’ve certainly turned your career into this blossoming thing from, of course, just starting as a door girl to becoming a DJ and a producer and a manager and owning a label and promoting your own festivals. It’s been quite a journey. When things come at you, you just figure them out.

HL: Definitely no real big design. I know that so many people are really ordered with how they think, in three years and a year and five years. I’ve started to a future plan a little bit, but I’ve always just really taken things as they come. And if it sounds like fun, I’ll jump in and do it. I did work as a Booker at the Ministry of Sound, and that was a really good economic lesson. I had parties before that where I booked the DJs and balanced the books, as you say, for a one night rave, and hiring a sound system and getting the people that would do the door when I couldn’t, and taking care of everybody like that. But then working at somewhere like the Ministry of Sound, you learn a little bit more like, well, if you have one big international DJ a month, the other three weeks, you keep it local and build your residence. And it was just a great education.

SIGT: Wow. And then from there, you became DJ Harvey’s manager?

HL: Yeah. And it was always really informal, but then we had such a level of success in London and then. We weren’t a couple at that point, we just were really committed to being parents to our son and business partners in a way.

SIGT: Do you have any advice for young artists who are aiming to make a career out of music?

HL: Don’t delay. Don’t succumb to fear and self-doubt and people telling you that you can’t do it. England was very much “everybody in their place.” So as a woman, you weren’t really expecting to go into a male-dominated industry, perhaps you could have a role in the background underneath two or three men. There’s a bit of a glass ceiling. And then you have your family just telling you to get a proper job. So it’s kind of rigged against you. Honestly, my thing is just don’t delay. Do it. Why not? It’s going to be hard sometimes, but it’s the most rewarding thing in the world. I’m just so glad that there’s so much more support for young people and so much support for females and female-identifying people and every gender to really have an equal platform. We can be our own promoters with social media, it’s a tool that we never previously had. You would think magazines with these magical things. How do you get interviewed for a magazine? Well, now you can have your own mini magazine online with Instagram or blog or whatever it is. You can put yourself out there in ways that we never could. With all of those tools available, why not just go for it? Be your own champion and don’t listen to the doubters. Even if they might be members of your own family. My family are astounded at what I’ve achieved. My mom was here staying with me recently from the UK, and I don’t think she ever believed that my ridiculous interest in music, even from making pause-button mixtapes as a kid with my best friend, would amount to a living. It might not be the most outrageously, flamboyant, lucrative living ever, but it’s enough for me.

SIGT: And it’s enough for your son. You’re in your garden. You’ve made it.