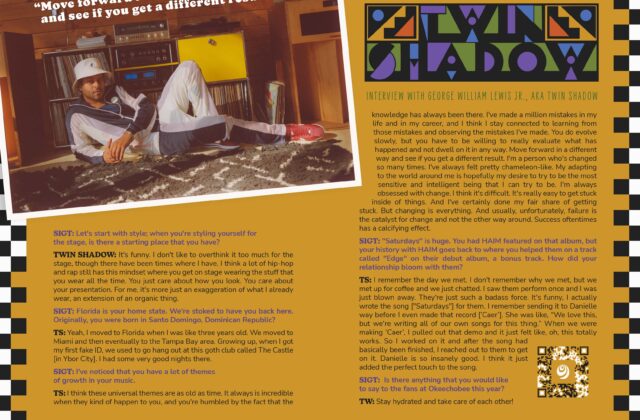 SIGT: We were all very impressed with you as an artist and an actor and everything else that you do. Let’s start with style. When you’re styling yourself for stage. Is there a starting place that you have and if so, where do you start?

Twin Shadow: Yeah. It’s funny, I don’t like to overthink it too much for the stage, though there have been times where I have. I think a lot of hip-hop and rap still has this very much where you get on stage wearing the stuff that you wear all the time. You just care about how you look. You care about your presentation. I just like this idea of kind of like a punk rock thing. For me, it’s more just an exaggeration of what I already wear, an extension of an organic thing.

SIGT: Florida is your home state. We’re stoked to have you back here. Originally, you were born in Santo Domingo, Dominican Republic?

TS: Yeah. I moved to Florida when I was like three years old. We moved to Miami and then eventually to the Tampa Bay area. Growing up, and when I got my first fake ID, we used to go hang out at this goth club called The Castle. I had some very good nights there.

SIGT: When did you move out of Florida and move up north?

TS: I moved up north when I was about 17. I dropped out of high school when I was 16. And then I think right when I turned 18, maybe I moved from Florida. Yeah. I spent my teenage years in Florida. When a lot of my old friends saw that we were playing Okeechobee, they were all just like, “we’re coming to see you, dude!”

SIGT: What pulled you out of Florida?

TS: Well, you know, when you’re playing music at your local coffee shop every Saturday night and your five friends are coming, you don’t really know how to grow anything or learn anything. Naturally you feel like the big cities are the place to go. The irony being that when you get to the big city, it’s never what you expect, and it’s never the scene that you hope for. But your experience of leaving home is really the valuable part. Seeing something different and also just feeling smaller, going to a big city always makes you feel smaller. I think it pushes you to stand out a bit, or try to stand out as much as you can.

SIGT: I’ve noticed that you have a lot of themes of growth in your music.

TS: Yeah. I think these universal themes are as old as time. It always is incredible when they kind of happened to you, and you’re humbled by the fact that the knowledge has always been there, but you just haven’t experienced it. I’ve made a million mistakes in my life in and in my career, and I think I stay connected to learning from those mistakes and observing the mistakes that I’ve made. You do evolve slowly, but you have to be willing to really evaluate what has happened and not dwell on it in any way, but to actually move forward in a different way and see if you get a different result. I’m a person who’s changed so many times. I’ve always felt pretty chameleon-like. And my adapting to the world around me is hopefully my desire to try to be the most sort of sensitive and intelligent being that I can try to be. I’m always obsessed with change. I think it’s difficult. It’s really easy to get stuck inside of things. And I’ve certainly have done my fair share of getting stuck. But changing is everything. And usually, unfortunately, failure is the catalyst for change and not the other way around. Success oftentimes has a calcifying effect.

SIGT: Your fifth album is out now. Why did you feel it was so important for this album to be self titled?

TS: Honestly, I just couldn’t come up with a name. I always loved having that one-word themed records. But it’s also funny to challenge your own lore, to break patterns because you can. It was more out of a sense of freedom to just not be tied to some sort of my own marketing gimmick. But yeah, truly, I just couldn’t think of the title. I love the record so much and it’s truly one of my favorite things I’ve made. And it just was like, well, the music says enough.

SIGT: How’s your response been with the new album?

TW: Good. I’m proud of the record. I’m happy for everybody who is involved because I’m very proud of it musically. I think it’s really fun. And we just had our first show in La playing some of the songs for the first time, and they went so well and I was just so happy to see people responding to it. So, yeah, I’m excited.

SIGT: “Saturdays” is huge. You had Haim featured on that album, but your history with Haim goes back to their first album where you helped them on a track called “Edge” on their debut album, a bonus track. How did your relationship kind of Bloom with them?

TS: I remember the day we met. I don’t remember why we met, but we met up for coffee and we just chatted and I saw them perform once and I was just blown away. I relate on so many levels, just like stuff that I think they love and are influenced by stuff that I love. They’re just such a badass force. They’re awesome and they’re good people. It’s funny, I actually wrote that song [“Saturdays”] for them. I remember sending it to Danielle way before it was even before I even had made that record. I sent it to them and she was like, we love this, but we’re like writing all of our own songs for this thing. And I was like, cool. And then it just sat on my hard drive. When we were making Caer, we were in Joshua Tree and I pulled out that demo and it just felt like, oh, this totally works. So I worked on it and then much later, after the song had basically been finished, I reached out to them to get on it. It was actually a really quick recording session. Danielle is like so insanely good. She could just do one vocal take and you’re done. It was just really cool. I think it just added the perfect touch to the song. It felt really good and I think people really enjoyed the track.

SIGT: That’s amazing. Is the record label that you just started, Cheree Cheree, does that mean “cherish?”

TW: It’s French. It’s named after one of my favorite songs ever written by the band Suicide, “Cheree Cheree.”

SIGT: Is there anything that you would like to say to the fans at Okeechobee this year?

TW: Stay hydrated and take care of each other.