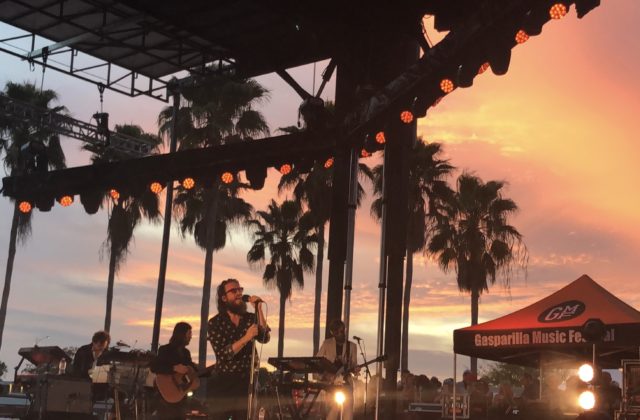 Here are random thoughts from my notebook over the weekend.

“I can’t believe I’m about to see Questlove play the drums.”

“This empanada understand me.”

“Always pay the $20 to park under the festival in the garage. There’s no better place. And where else can you park under a festival?!”

Five years ago, I started Shows I Go To. Today is a celebration for us and our friends and there is no place more beautiful than Gasparilla Music Festival at Curtis-Hixon Waterfront Park (named one of the best places to experience hallucinogenics by High Time Magazine) to be present.

Mountain Holler is a genre I wish I was playing and creating and tasting through my throat. It’s the way he rolls his self back before he gives every ounce he has in the brightest orange sunlight his soul can produce. There’s a patient patience built and conveyed in each healing note. I sit next to Ella Jet. She’s metronomically brushing tears aside.

My friend Jessica Pawli is wide-eyed telling me Beartoe was in a “cult” with FJM when they were kids. Beartoe, who performed earlier with an allstar cast — Lauris Vidal, Nadeem from The Wildtones, Brian Chodorcoff from The Legendary JCs, and Alan Cowart on drums. Father John Misty recalls the encounter onstage during his set while speaking directly to Beartoe in the audience:

“When I was a kid, I was in a religious “cult” called the Tree of Life. I hadn’t seen into anyone from those years in decades — until Sunday in Tampa and we both played in bands today. [In the cult] We both learned how to speak in tongues, I still remember my prayer language, too. It was a hell of a ride, and amazing to see you again [pointing at Beartoe].”

Across the street (at The Hub) Father John Misty arrives. He’s smiling and passing out hugs. I’m talking to a new friend who’s 65—Thomas Cline and he keeps complimenting my friend Mady and I. He licks his lips and serenades me “Stop the world and let me off. I’m tired of going round and round,” —Patsy Cline. He’s having heart surgery next week.

Everyone is here. I catch up with Beartoe about FJM and he shares the encounter with FJM backstage and he began to sing their childhood prayer together and FJM joined in. Life is a crazy story.

Beartoe has been working on a studio album with his band, HECKFIRE since 2016. To Heck With The Devil will finally be released on April 1, 2018. Their album release party is March 30, 2018 and March 31, 2018 in New Smyrna Beach and Deland respectively.

Someone asked me why it was so beautiful. It’s the people, the park, the way I felt when I found Mountain Holler’s set in the amphitheatre and peace, the smiles stretched over faces with endless age ranges, my best friends, the sunset glowing behind Father John Misty easing into the stars, the kindest energy swallowing me with each eye I meet. It’s a tough challenge articulating feelings into written form. Gasparilla Music Festival is hands down my favorite music festival. It’s stress free. It’s a wide open welcome home each year. But don’t take my word for it. You have to feel it yourself. See you in 2019 GMF.

Head Up! Jason Earle is meticulously working on various reviews (like last year) for Saturday. And The Sober Goat is uploading a GMF Photo Gallery. Stay tuned!

GMF VIDEOS from THE SOBER GOAT:

(You can totally see me dancing in The Roots vid!)