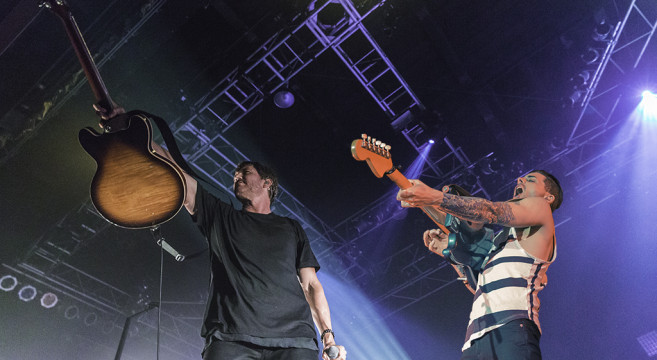 I have no idea how many times I’ve seen Chris Carrabba. I’ve seen him play with all 3 acts he’s best known for: Further Seems Forever, Dashboard Confessional/solo, and Twin Forks. I first saw him play around 2001. I’ve been following him around musically for a long time and I’m not ashamed of it one bit. Chris Carrabba has gotten me through some good, and more than rough, times throughout my adolescent years. I grew up during the emo days. I can, and will, say that I have emo tendencies …

Prior to the show, we (Fricke 1 (aka Adam) and I) met up at Mitch’s around 6:30. Some “office” duties were taken care before we left to go pick up Trevor. On our way to Trevor’s, we received a phone call with some news: Augustana, the opening band, had to pull out of the line up due to “illness.” The “illness” being one of the band members was struck by lightning in the parking lot of House Of Blues Orlando! We overheard that the lighting entered through his shoulder and came out his leg. Later, we received confirmation that he, Jake Owen, was stable and expected to make a full recovery (We wish you the best, Jake!). The next day, Augustana posted a statement about the situation on their facebook page:

Hey everyone, Last night, our bandmate Jake Owen was struck by lightning in Florida shortly before our show. He spent…

I haven’t seen Augustana play in, I couldn’t even tell you how long. Now they would bring me back to those early high school days. 🙂 When we got to  Trevor’s, we hung out for a bit, Mitch took care of a little more SIGT office stuff, and then we were on our way to HoB. The short car ride there was pretty amusing. We saw an entire rainbow! Mitch got it on Snapchat, it was pretty damn funny (“GET THE GOLD!!!” – if you follow us on Snapchat, you know what that means). And, the sunset was absolutely gorgeous!

We finally got to Downtown Disney and headed to valet parking. It was taking too long for our liking, so Trevor and Adam hopped out of the car as it was near showtime. After the valet attendant took Mitch’s keys, we picked up our credentials/Loge passes and headed upstairs, where SB was working, just minutes before Dashboard took the stage.

Oh, the excitement that was running through my body! It had been a really long time since I last saw Dashboard Confessional play a full set. I’ve seen Chris perform at The Social when Twin Forks (Live Review Here) played with Chad Gilbert from NFG’s side project, What’s Eating Gilbert (Sidenote: GO to Chad’s show on July 11 at the Social). That night, I got to have a very insightful conversation with Chris about the music scene down here for a couple of minutes.

Here’s some photoshop magic from Adam, adding both Chris Carrabba & Stephan Jenkins to the same stage. 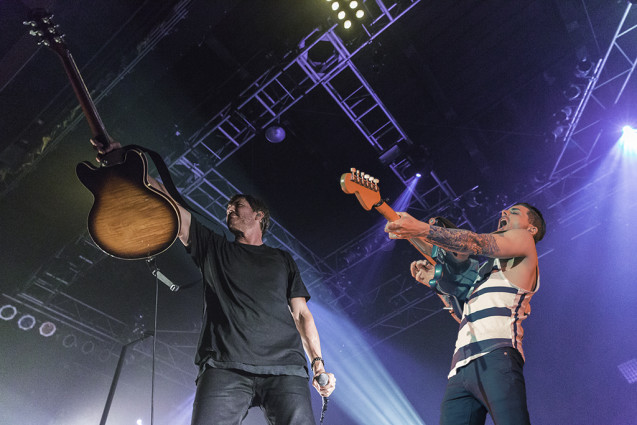 What was even more awesome about this show, it was being live streamed! I had joked with everyone that we should totally manage to get on camera in some ridiculous way … yeah, that never happened. Dashboard Confessional kicked their set off with “Screaming Infidelities.” I just about died. Actually, the entire setlist was high school with a dash of college (ha, get it). My all time favorites were “The Sharp Hint of New Tears,” “The Good Fight,” “Remember to Breathe,” “As Lovers Go,” “Again I Go Unnoticed,” “So Long, So Long” and “The Best Deceptions.” I kind of just went through most of the list (whoops). I’m a huge fan of the older (original) material.

As expected, the set ended with “Vindicated” and “Hands Down.” Chris and the guys put on a great show. It would’ve been cooler if they played all night. 😉 Playing every DC song would’ve been the best surprise ever! Only in my dreams … there was a little technical difficulty with Chris’ guitar during “Stolen,” but that did not stop him from performing. He had his roadie take care of it, and continued as if nothing went wrong, then kicked the guitar across the floor.

In all honesty, Chris didn’t have to sing at all. All he really needed to do was play his guitar. The crowd pretty much took over the lyrics. It was incredible. The entire show, the crowd was singing every word to every song. I know I’m guilty of doing it. Some of my friends from home were unfortunate enough to hear me sing along in my Snaps. The set was just amazing!

I’ve seen Third Eye Blind once before at SXSW 2013. Unfortunately, the outdoor show was shut down before they could end with “Semi-Charmed Life.” The Austin Police Department shut the show down because of the overflow of people. The crowd blocked all of 5th street. I couldn’t tell you how true that was … but that’s because I was front and almost center. All I saw was a sea of people, plus people crowding the parking garage across the street from the stage. Craziness!

So, finally seeing 3EB really made my night. I truly didn’t know what to expect. I was filled with sooo much excitement and anticipation. They’ve been around for a long time. I was barely in the 1st or 2nd grade when they made their debut, but age is just a number, right? I’ve known them for a long while now. My childhood days consisted of them being on the radio (you know, when the radio was a good and cool outlet). Lead Singer, Stephan Jenkins, and the band started off the night with “Faster.” What a perfect choice! “Graduate” was the second song, which was even better!

They just grabbed us by the [figurative] balls. It was GREATNESS! Just thinking about the show just gets me all happy. 🙂 We were all rocking out, singing along, enjoying our beers. It was perfffff! My favorite songs were “Blinded (When I See You),” “Everything Is Easy (off of their upcoming album, Dopamine),” Beyoncé’s cover of “Mine,” “Motorcycle Drive By,” “Rites of Passage,” “Jumper,” and of course, “Semi-Charmed Life.” The encore was amazing! I finally got to see them play “Semi-Charmed Life!” It was everything I expected and more! I cannot put how I felt about their set into real words (maybe words don’t exist for how great it was). It’s just a bunch of good, fun, happy emotions! Now, I’m so pumped for Dopamine to drop on June 16th. I feel it’s going to be a good one!