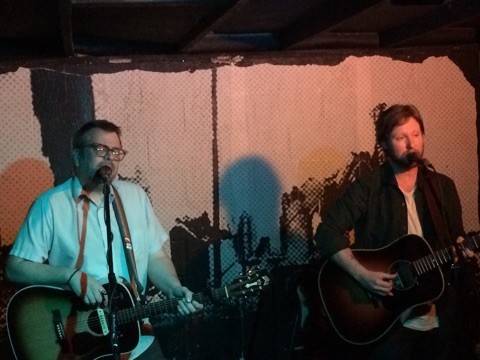 Cory Branan and Jon Snodgrass love each other. Their love comes through on stage, but even more so when the two of them sit to talk together. We are situated behind Orlando’s Lil’ Indies on a brisk November night to record an episode of my show, The Marinade with Jason Earle. The duo has returned from a nearby taco joint ahead of their set at Will’s Pub next door. It is dark in the alley, the only light provided by my computer screen and a distant streetlamp. Still, the mood is festive and relaxed.

Snodgrass and I sit on a bench, my computer the partition between us. Branan stands nearby smoking a cigarette and leaning over or kneeling when it is time to contribute. In those moments he comfortably inhabits Snodgrass’s space the way best friends do after becoming unselfconscious about physical space.

We have met before, although I would not expect them to remember exactly. Except they do. Maybe not me, per se, but the stories I tell about their legendary shows played in the round, fueled by libations and truly great songs, are fresh as their morning coffee. We talk for maybe thirty minutes but the ease with which the two play off of each other suggests our talk could have lasted a day or more.

Branan pokes holes in Snodgrass’s analogy for our earth. Snodgrass divulges he looks to play the note or chord you were not expecting when he writes. Both men recoil in horror when I suggest they should let their kids be free to grow up and embrace The Dark Side.

Episode 7 the silliest show we have recorded to date. Both songwriters are gracious with their time and talents– equally willing to laugh at themselves and indulge my heady questions about their craft. Episode 7 of The Marinade with Jason Earle is a ton of fun. It is an honor to sit down with Cory Branan and Jon Snodgrass, two of my all-time favorite writers. Thank you, Cory. Thank you, Jon. Thank you, listeners.

Get Cory’s excellent new record Adios and his other incredible catalog here. Check out Jon’s solo stuff, as well as his work with Scorpios, Drag the River, and Armchair Martian here. Cheers, y’all.

The Marinade Episode 7 by Jason Earle.