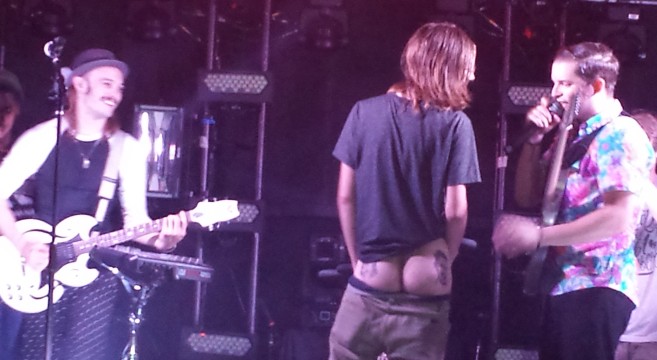 Cherub made me dance and sweat and hurt and cry and I loved it. This show reminded me how fun it is to let loose and not give a fuck. The daily stresses of work were melting away, beers were raised toward the sky, and just for a moment, we were all in bliss. Smiles were everywhere. Everyone was dancing. Everything was OK.

Oh yeah, and this was a free event! The cool folks at Red Bull put it on. It was behind Firestone Live in downtown Orlando and there were plenty of food trucks and alcohol, a photo booth, and some badass up-and-coming artists.

Red Bull Sound Select is a touring concert series that puts on free events all around the United States. They have a gorgeous matte black tour bus that converts into a full size concert stage. The sound was absolutely incredible! Especially for such a compact and mobile setup. The lighting was nothing short of impressive. We’ll have to get to the weird ass guy that was in charge of Cherub’s lighting later… In the meantime, check out the awesome pic of the stage below that Lindsay took: 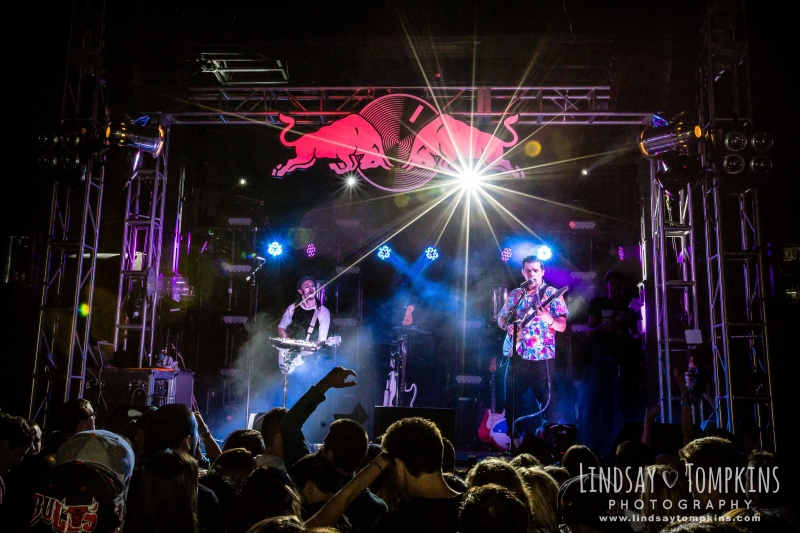 The opening act was out of Nashville, TN. They had a really great band name: Future Unlimited. I enjoy the thought that the future is unlimited. I was late to the show because I was practicing my newly acquired skill of rolling blunts so unfortunately, I missed them. Future Unlimited (FU) is currently unsigned but they have a really catchy synth pop song called “Golden” which is making waves. Check out “Golden” by FU and keep your ears out for them over the next year.

Carousel is a band that is growing in the right ways. They create an energy through their music that hard-wires them to their fans. You could tell each and every one of their fans felt every single beat, every lyric, every breath, like they were a part of the music themselves. The first time I saw Carousel was about a year ago with A Silent Film and Churchill at The Social. Carousel swooned the crowd with their infectious dance tunes and cute faces then, and have clearly grown artistically while maintaining the same humble feel.

As Carousel played their hit “Let’s Go Home,” I noticed smiles and closing eyes as many sang along and danced, surrendering themselves to the sounds. It’s always a gorgeous thing to watch people express themselves to great sounding music. Check out the song “Lets Go Home” by Carousel below.

“Turtle decapitates concert goer!” If you give kids shit to play with, they’ll be happy. If you give drunk adults something to play with, they’re likely to hurt themselves. An inflatable shark and sea turtle entered the audience during Carousel’s set. The shark was big and bulky like the dolphin in that “meanwhile in Florida meme.” But that turtle was large and thin so it was easy to throw around. Too easy I think – People were flinging that thing around like a Frisbee! The high speed impacts looked like they hurt a couple people. Luckily, the difference between kids and drunk adults is that drunk adults don’t seem to mind as much when they get hurt. One of my best friends always tells me “just dust off your wounds and keep drinking.” Seems legit. Someone eventually popped the turtle and then we were thrown some beach balls to play with which were much safer.

“I got so drunk at Disney World! SO drunk!” – Jason from Cherub.

This was Cherub’s first time in Orlando. I think the drinks started kicking in about halfway through their second song “Heartbreaker” because shit broke loose! Hands were in the air and we were all blissfully fading. Fading into the night only to be abruptly brought back to reality with a swift slam to the head by a surprise beach ball. You quickly thought “what the fuck?!” as you laughed and tried to slap the shit out of it in return. It was truly a fun distraction, looking up and focusing on punching the next erratic beach ball while your hips and legs and knees and toes couldn’t help but effortlessly move to the formidable music playing in the background. It was fun. It was serene.

Well, until you realized there was a drone above our heads! Everyone kept looking up and staring at that thing like “can this mother fucker tell I have hash oil in my e-cig?!” It all fairness, I’m sure it was controlled by Red Bull and was just there to document the performances and the event.

Speaking of drugs, what the hell was this dude on when he got these tattoos?!? 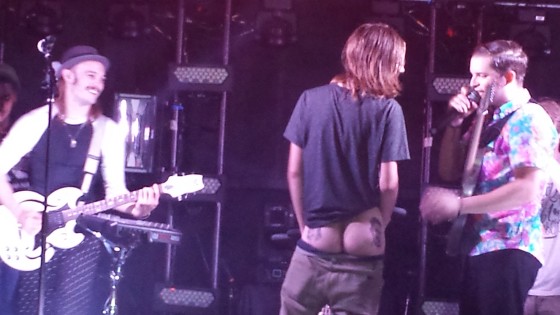 That shitty pic (no pun intended) is of Cherub’s lighting technician’s ass. Yes, those are the faces of the two members (Jason & Jordan) of Cherub tattooed on his hiney. Yes, he’ll regret that shit forever. Then again, it’s on his ass, who really cares?

Cherub covered the infamous Calvin Harris song “Feel So Close.” You know the song, “I feel so close to you right now, like a forcefield…” Well that song fucking sucked! For me anyways. I was dancing and singing and making eyes at my girlfriend and then BOOM! The girl in front of me got a little too into it and suddenly swung her hips hard in a clockwise motion. She was wearing a good size purse. Her purse swung with her, trailing the same exact motions as her body and slammed hard right into my manhood. My eyes teared up. I focused on my breathing. I remained stagnant the remainder of the song as I tried to blur the sickening pain. “You feel too close to me right now” was the only thought I should have had! I was too lost in the song the realize I was in danger.

Check out “Tonight” by Cherub below. The chorus is in an R&B style and is “Hell yeah! Mother fuck-in right!” It’s a really fun song featured on their EP that was released December 2013.

“Doses And Mimosas” absolutely freaking rules. It’s the first song I discovered by the band Cherub. Mostly because it’s getting a lot of well deserved airplay on Sirius XM’s Alt Nation and it remained on the ALT 18 countdown for quite a few weeks. How can you go wrong with these audacious lyrics over bass heavy synth pop:

About halfway through that song, as if the crowd wasn’t excited enough, Jordan popped a fresh bottle of champagne and sprayed it all over the wild, thirsty crowd. It was pretty awesome. Check out the video for the song that launched Cherub, “Doses And Mimosas” below:

CHERUB HAS A NEW ALBUM COMING OUT MAY 27TH ENTITLED YEAR OF THE CAPRESE! They have a new single that they performed called “Disco Shit.” A lot of people were already singing along. Click to check out “Disco Shit” by Cherub.

After the show, I walked into the after party for a moment to catch the illustrious Orlando native, Britt Daley, perform a DJ set. She was gorgeous as ever and her voice was flawless. You gotta catch her at the Florida Music Festival next week! After I left Firestone, I made it down to Gringos Locos to inhale some Chicken Double D’s – No Pico. Add Jalepeños. It was a good night.

Lindsay took a bunch of awesome pictures from the show. Check out the galleries for Cherub Live Photos and Carousel Live Photos.