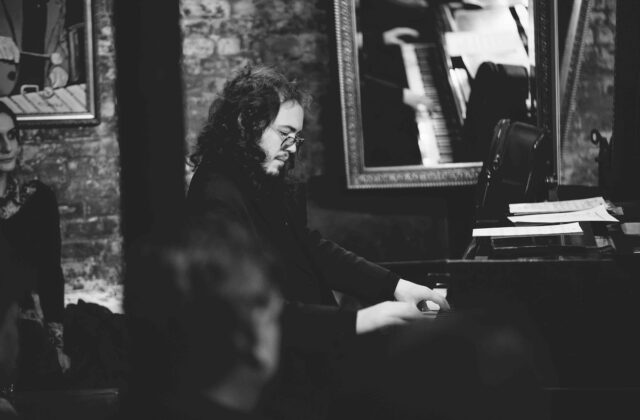 When Ben Rosenblum reached out to SIGT in December of 2019, we loved what we heard, so we featured him in SIGT Magazine Issue #05 (interview here). We witnessed the magic of he and his trio live in Orlando—January 2020 (videos from 2019 below). It was during these moments, over my plastic cup full of red wine, I promised myself—as long as I can, I’ll never miss a Ben Rosenblum performance anywhere I’m able.

He takes you in immediately—diving through the dips and crescendos built inside his beautiful brain. You can catch a smile nearly every song, especially when he makes the unexpected left turns in time and tempo. If the music doesn’t spread a smile across your Florida face, his in-between-song stories surely will. There’s a documentary on Netflix called “Have A Good Trip” which harps on the importance of “set” and “setting.” Ben Rosenblum ensures a healthy environment to take your mind to altered states, with or without the assistance of substances. He’s the substance. Catch him at live at Timucua Arts Foundation (Timucua White House) at 7pm, 8:30pm (or both) on Friday, February 12, 2021. Tickets are available here for the in-person show. Not ready to adventure out? No worries. You can stream the show right on the Timucua YouTube channel (donate to the event here). Details below.

Details: Award-winning New York City jazz pianist Ben Rosenblum and his trio will perform an intimate concert at the Timucua Arts Foundation in Orlando, part of a seven stop Southeast tour through Florida, South Carolina, and North Carolina. This evening will be open to limited attendance for its two sets at 7:00pm and 8:30pm, and will also be live-streamed. More information can be found at the links on Timucua’s website.

Ben Rosenblum has been called “mature beyond his years,” (Sea of Tranquility), an “impressive talent” (All About Jazz) who “caresses [the music] with the reverence it merits” (Downbeat Magazine). Since the release of his debut trio album, Instead (4 stars, Downbeat), Rosenblum has toured with his trio throughout the United States, including multiple extensive tours of the Northeast, Midwest, South and West Coast, and internationally in Canada, Europe and Japan. He was a featured soloist at Carnegie Hall’s Stern-Perelman Auditorium – with Reona Ito’s New York Harmonic Band – and has appeared at prestigious venues throughout the world, including at the Appel Room at Lincoln Center, Kuumbwa Jazz Center, Ravinia, Himawari-No-Sato Concert Hall in Yokohama, Bird’s Eye in Basel, and the Library of Congress. His second album, River City, was called “richly romantic” and “well-realized” by JAZZIZ Magazine, which featured the title track as part of their Fall 2018 CD. Recently, Rosenblum released his third album, Kites and Strings, which is the first to feature him on both piano and accordion alongside his sextet, the Nebula Project.