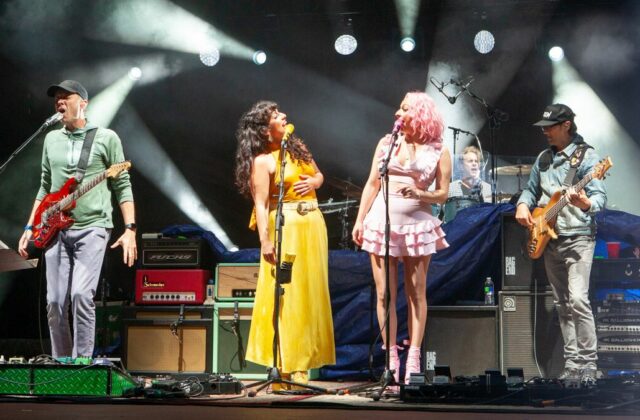 Over the past few years I have learned to put little faith into the words of weathermen. Meteorologists are pretty much the only people who can be wrong most of the time and still keep their well-paying job. That being said, I prepared for the worst; rain jacket, rain pants, all-weather photo bag… Spafford’s set went off without a hitch as the clouds swirled over head. Then came the moment we were all waiting for; the intermission between bands and the final countdown to the raucous return of Umphrey’s McGee to the reddest of rocks. 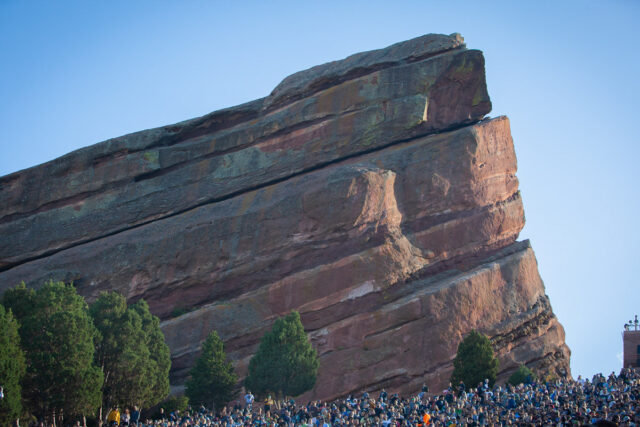 Well, I guess meteorologists are not wrong ALL the time. Just before game time an announcement came over the PA telling us to seek shelter as inclement weather was on the way. Though it was not raining yet, we could see the flashes of lightning. The masses dispersed to their vehicles and the visitor center. I can only imagine the crowds in their vehicles were set to rage harder than a storm ever could. Without a vehicle of my own on site, I hunkered down with a fellow photographer in the only dry corner on the property. Well, it was dry enough for the equipment while I was still happy to be sporting full rain gear. While the rain was not severe enough to run off all the fans, all HAIL broke loose for about 5 minutes. Even still, some hardcore fans stood their ground like Lieutenant Dan atop his perch during Hurricane Carmen.

Like all things, the storm, too, did pass. And we were rewarded with the almighty sounds of Umphrey’s McGee. And it was fucking righteous. 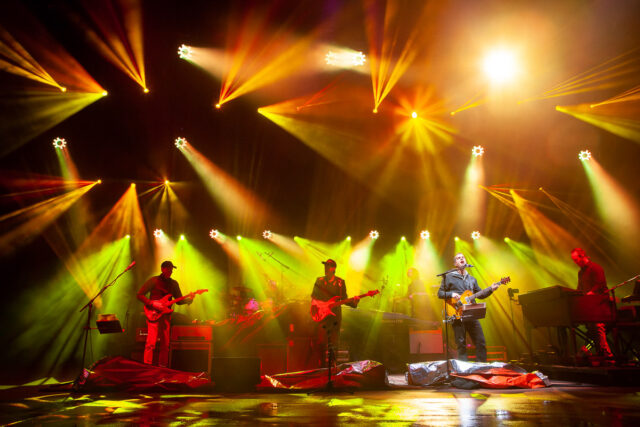 They came out of the gates with dicks swinging; “Roctopus” to rock us and shake off the rain. After the opening song concluded, Bayliss stated, “There’s no such thing as bad weather, just bad attitudes, right?” You’re damn right. And we were chock full of good attitudes. The rest of the evening saw light drizzles and heavy rocking with good chance of big smiles.

Night one weaved songs of old and new, tried and true. One of my favorites of the night was “Ringo.” Just about 7.5 minutes into it, the song broke down into a sexy little groove to which I just cannot stop listening. The hands-down highlight came during set two with the accompaniment of vocalist Kanika Moore, of Doom Flamingo. It was her first time at Red Rocks. For her Rocks debut the band played their first ever rendition of Pink Floyd’s “Have a Cigar.” What a vicious delivery it was. 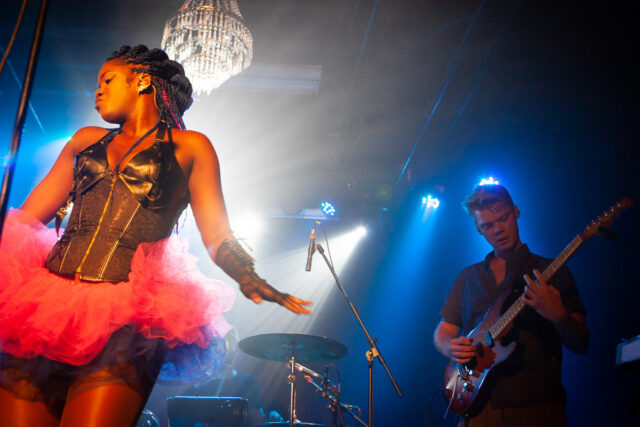 Lucky for us, in honor of the evening’s rain delay, the usual midnight curfew was lifted to allow the band to complete the evening’s musical journey. For a venue who is known to pull the plug at 12:01, this is a big deal. We all walked out of Red Rocks feeling as though we were washed over in music and not rain.

Night two, the umphreaks knew what to do. The weather report did not look too much different from the night before. But night 1 taught us that the weather should not change our sunny disposition. Despite all the cloud cover, Saturday night’s opener, Turkuaz, shined with all the colors of the rainbow. The nine-piece band, all adorned in different bright hues, told the weather to go funk itself. And it did. 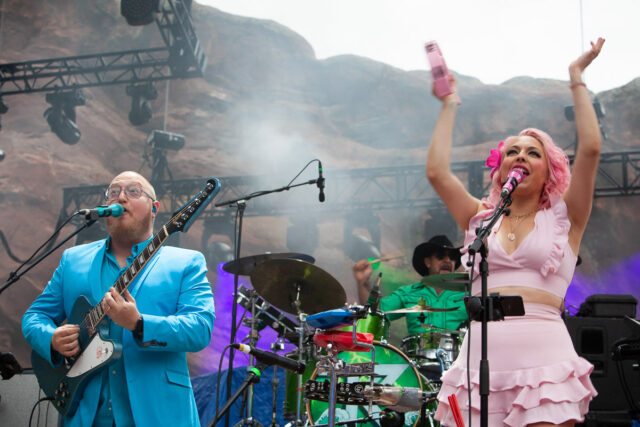 We stayed dry with the exception of the sweat from our unstoppable dance moves. Turkuaz brought the energy of the crowd to eleven. This is my third year attending Umphrey’s Red Rocks run and although they consistently have great bands opening, Turkuaz has been the best to date. I have never seen the entire crowd so immersed in the music of an opener. It was almost a shame that their set had to end. But that could only mean one thing — it was time for the main event! 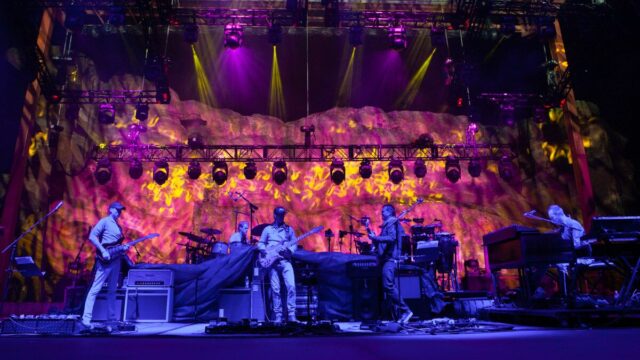 With the sun down we could no longer see the clouds and at that point we just did not care. There was magic in the air. And a lot of weed, of course. Legal weed at that. Colorado is a pretty cool place to see an outdoor show. 😎

Continuing with the high energy, they let it rip from the start. They leapt from intro song directly into a shredding rendition of “Andy’s Last Beer,” a long-time staple of UM’s repertoire. From there they weaved through newer songs and found their way into a jaw-dropping, mind-expanding, twenty-minute “Utopian Fir” with an appropriate and incredibly brief tease of “Fool in the Rain.” 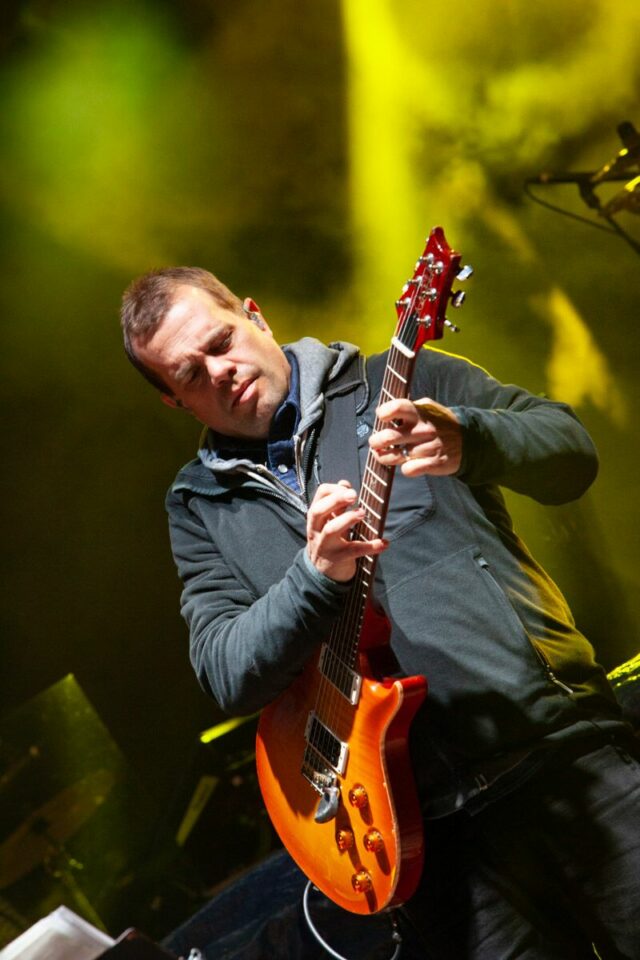 A few songs down the road, they brought up the three-piece Turkuaz horn section to join them on UM tune, “Comma Later.” As if the well-dressed gents did not make the stage look good enough, for the next song they called up Shira Elias and Sammi Garrett, also of Turkuaz. Together they performed “With a Little Help from My Friends” in dedication to Jeff Austin who was fighting for his life in the ICU at the time. It was soul-stirring, heart-string-pulling, and tear-jerking. I am not quite sure how Brendan Bayliss did not break down into tears over his friend and band-mate in 30dB. There were surely tears in many eyes in the crowd.

This was my 50th time seeing Umphrey’s McGee play and it gets better every time. Through the years shooting live music I have seen many great bands multiple times. I tend to get over seeing some bands. This has not happened with Umphrey’s and I do not foresee it happening any time soon. I could not be happier with the second set of this show, opening with “Attachments” and closing with “Remind Me.” With all sorts of glorious tunes in between. “2×2” saw a free-form section of an otherwise heavy tune. Ryan Stasik even broke into a little bit of “River People” by Weather Report; only fitting since we had all been glued to the weather report for the weekend. The horns came back out for “Example 1.” And once again the ladies came out to add aural and visual appeal to a version of “Take Me to the River” that would give Talking Heads a run for their money.

Never miss a Sunday show. Its a trite expression in the jam scene but with it carries sage advice. This Sunday show was no exception. Not only were we to get two more sets of unbridled Umphrey’s McGee, we also had an additional set of Led Zeppelin tunes performed by Umphrey’s accompanied by Jason Bonham, son of John Bonham. And for the first time of the weekend, the sun was out on Sunday! 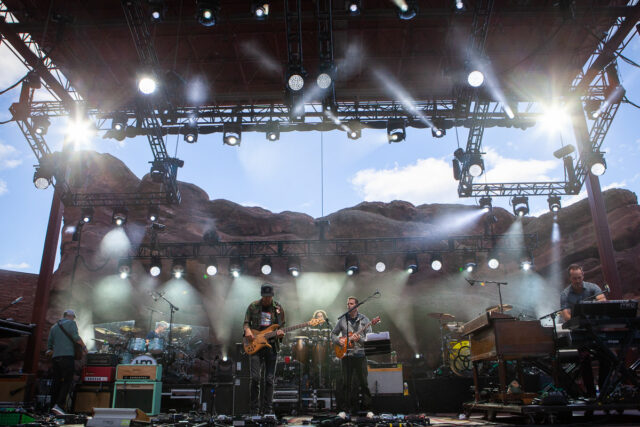 With an earlier curfew on Sundays, the show had an earlier start. The band came on stage basking in sunlight. And so they began tanning and jamming. Set one was a solar-powered shred fest. Even during the more subdued section of “It Doesn’t Matter,” Jake broke into AC/DC’s “Back in Black.” 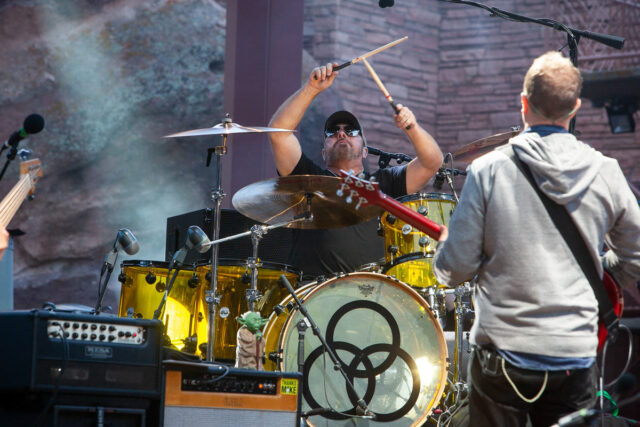 Set two began as the sun sunk behind the rocks and the rock rose on stage. They surely did not ease into it. The band exploded directly into “Immigrant Song.” With two drummers, a percussionist, two guitars, a bass, keys and a vocalist the sound could not have been more full and alive. While the drumming of Jason Bonham had been announced for months, the vocals of James Dylan was apparently a last minute addition. It could not have been more appropriate. He nailed it. The whole band nailed it. I was not alive during Zeppelin’s time so I, of course, could never see them play. This might be the closest I could ever get. Even if Zeppelin did finally have a reunion, I am not sure they could match this performance. Not being the greatest hits kind of guys, they played a selection of b-sides along with some of the more well-known hits. 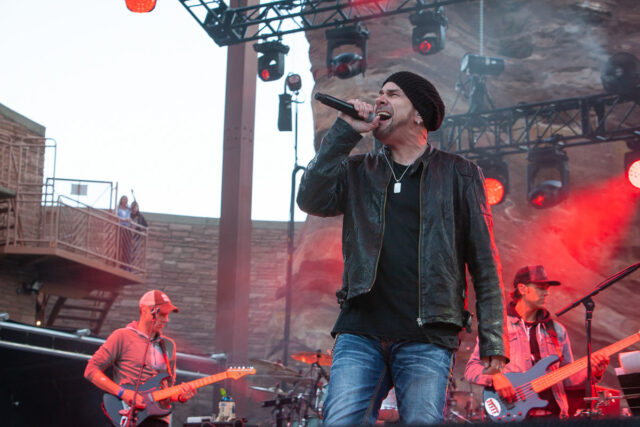 When it came time for the final set of the weekend, it was clear the band was basking in the joy of the three night event and were not ready for the fun to stop. The highlight of set 3, for myself and many long time fans, was “Front Porch.” It’s one of their oldest tunes and one that is less-often played in recent years. And boy did they have fun with it. They even added a few rounds of the chorus of “Waterfalls” by TLC.

As all good things, the weekend had to finally come to a close. The encore started with “Conduit,” an Umphrey’s original joined by Jason Bonham. Then they brought out James Dylan to get the Led out one final time with “The Song Remains the Same.”

The weekend started with rain on our parade, but there’s nothing like live music to refresh the soul and makes us whole again. The music was phenomenal from start to finish and the weather got better with each day. Seeing one of the best bands on planet Earth playing one of the best venues on the planet is truly stupefying. Now if only I can hold on until August to see them return to Florida. 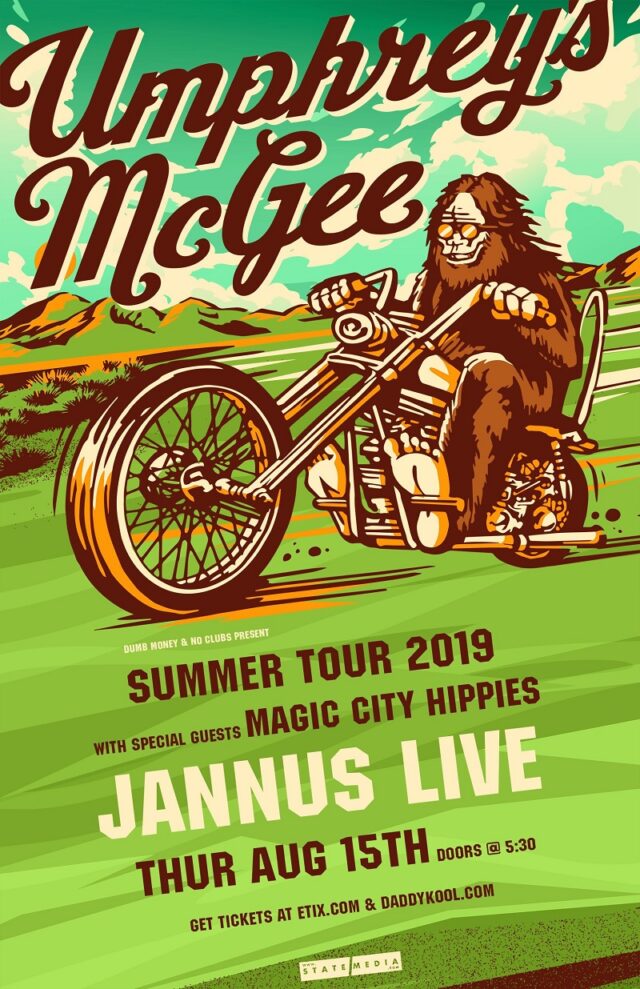 SET LISTS as provided on allthings.umphreys.com