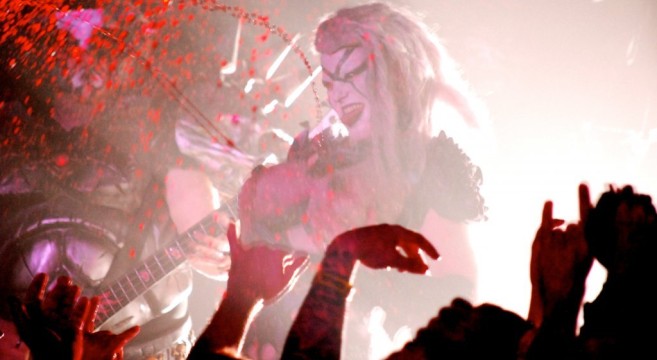 Editors Note: This is our first installment of a fun new series we’re calling “Two Views,” where we put out two different writers at a show to conduct completely independent live reviews. Then, we edit the two together for a very interesting piece.

In this installment, Dainon and Trevor attend the bloodbath live performance that is GWAR. Dainon had never witnessed a live GWAR performance and wasn’t quite sure what to expect.  His results were hilarious. Trevor, well, Trevor fucking loves GWAR.  – Mitch Foster. 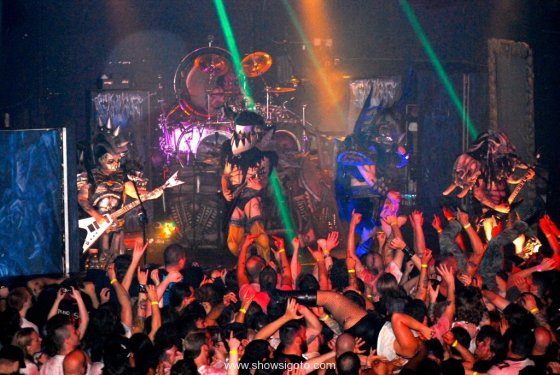 Dainon: I Saw GWAR and All I Got Was This Lousy Bloodstained T-Shirt. The reason for actually attending a GWAR concert is still relatively unclear. I say this several days after having gone, in fact, which means my mind’s decided to stay in that “What just happened?” phase pretty much forever.

Trevor: The “Scumdogs of the Universe” Unite to Pay Tribute to Their Fallen Leader. When Blothar took the stage, the bloodbath began. Over the course of the next ninety minutes I was sprayed with every bodily fluid imaginable and I fucking loved it. My shirt that was originally white was now a light shade of red with traces of green and yellow.

T: With the passing away of GWAR’s lead vocalist, Oderus Urungus (Dave Brockie), in March 2014, the future of GWAR was fairly uncertain. Although it would be very tough to fill Oderus’s shoes, it was his sincere passion to keep the spirit of GWAR alive for as long as possible. Shortly after his death, it was announced that GWAR would play two tribute shows, their annual GWAR-B-Q in Richmond, Virginia and Riot Fest in Chicago. These shows would serve as the debut for GWAR’s new vocalists/characters Blothar (former bassist Mike Bishop), and Vulvatron (Kim Dylla). The success of these shows proved that GWAR could carry on while still paying tribute to their fallen leader, Oderus Urungus. On December 5, 2014 , GWAR brought their “Eternal Tour” to Venue 578 in Downtown Orlando.

D: I’d say the reason I went landed square in the middle of, “Oh, hey, here’s a ticket!” and some scenes from that Empire Records movie (you know the one). No rational person wants to be in a place where blood is going to be sprayed on them—whether or not said blood is real—um, right?

T: The show opened with a message from GWAR’s manager Sleazy P. Martini. It was tough to hear exactly what he was saying but from what I could understand over the course of the night they would reveal the true reason behind Oderus’s “disappearance.” An image of Oderus floating through space appeared on the video screen as the band went into “Fly Now,” from their most recent album Battle Maximus.

D: Wrong. The splash zone of a GWAR concert is something fans in their whites actually fight to be in. They aim themselves towards the cow udders and engorged breasts shooting the blood, too. It saves them from having to hit the merch table on the way out: it’s a do-it-mostly-yourself souvenir. But I digress. I did go. I went and I mostly hid behind a bar, far, far away from where any accidental blood drops might hit me in the face.

T: GWAR played a variety of songs going as far back as 1988’s HELL-O and their breakthrough album 1990’s Scumdogs of the Universe. Along the way we were introduced to various different characters, some of whom lent their vocals to several songs. One of the newest members of GWAR is a female vocalist who goes by Vulvatron, who not only sings but also shoots blood out of her nipples. I was lucky to be hit right in the face a few times. 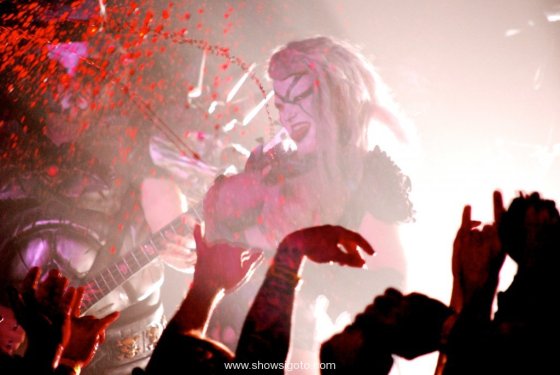 D: I’m trying to think whether or not there was ever a time in my life that I have wanted to be sprayed by blood, but I haven’t come across it yet. I do know that, at one time, I might have been more scared of GWAR than cautiously intrigued. But all of that fear has been tossed by the wayside. It’s like going to the circus. Still scary, sure, but chances are good you’re going to survive it.

T: The set was interrupted by long time Gwar nemesis, Sawborg Destructo, who claimed he wanted to be the new lead singer of GWAR. He took to the mic only to be brutally executed by the other members of GWAR throughout the next song. When Blothar returned to the stage he addressed the rumor that he had udders as he told the crowd “these aren’t udders, it’s a bag of dicks.” Near the end of the set a giant alien creature by the name of Mr. Perfect arrived on stage. He informed the crowd that Oderus was indeed dead and wasn’t coming back. The band took this to heart and proceeded to rip him to bloody shreds, spraying his internal fluids everywhere.

D: It’s a performance that’s more about the spectacle than it is the music. From where I stood, I had weird swirling visions of H.R. Pufnstuf, Land of the Lost Sleestaks and, oh, some of the more evil parts of the Super Mario Bros. world. Was Grimace there, too? I do know for certain it sounded like an entire army of Cookie Monsters had commandeered the microphones.

T: GWAR finished their main set with “U Ain’t Shit” from their first album which left the chanting “Oderus! Oderus!” The band returned to the stage to play “The Road Behind” as a tribute to Oderus. Then Blothar told the crowd that they were going to play a cover song by the “shittiest band in the world, the fucking Pet Shop Boys!” The encore consisted of the weirdest version of “West End Girls” that I have ever heard, and a cover of The Jim Carroll Band’s “People Who Died,” where they replaced the chorus with “Oderus died, DIED!”

D: Then again, I was far, far away and I couldn’t see that stage so well. I can say I went. I can say it’s off the bucket list I never knew it was on. But I can’t say I’ve got a forever-bloodstained t-shirt to prove I was a part of that journey. And I’m going to have to be okay with that.

T: The crowd was showered with blood one last time before the band left the stage leaving most people dripping wet. After suffering such a great loss, I was impressed at how well these guys had it together. It was a great end to a fun night that proved, although it was not quite the same without Oderus, GWAR is still alive and well.

The Shows I Go To team likes to do cool shit (like this). Once upon a time, we put out a piece that six people worked on entitled: 3 Quests, 1 Love | Six Individual Perspectives of Questlove’s Three Night Residency at The Social Orlando. I think you’ll be seeing a lot more “Two Views” in the future. 🙂