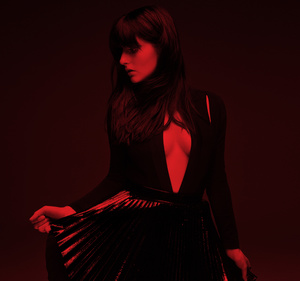 TICKET GIVEAWAY: The deep, dark, sexy tones of BANKS and the mistake I made. | Coming September 20 to The Beacham

I missed my chance to see L.A.’s sultry siren BANKS at Bonnaroo this year (more on that in a second) but I am thrilled to get the chance to see her at the Beacham Saturday, September 20th. BANKS is currently embarking on a tour in support of her new debut album, Goddess, and will be joined by Australia’s electronic R’n’B group Movement and UK’s funky, grime-based rising star Lil Silva. This show is for anyone who likes deep, dark, sexy, soulful, electronic tones that you can move to; think the Weeknd, Ellie Goulding, Lykke Li, and FKA twigs. BANKS was not an option for me at Bonnaroo; this is because I passed-the-fuck-out in my tent on the first night. Blame it on the all-night driving through Georgia’s fascist state-lines, the early bouts of inebriation, or the hot Tennessee summer sun. The odds were against her as she was squished up at the same time as electro-pop duo Cherub, global electronica phenomena Omar Souleyman, and indie rockers Poliça… but I still would have picked BANKS over all that. Of course, I still have not heard the end of it from my friends who made it to the show.

Her sound is deep, expansive, and electronic but her style is personal, confessional, and singer-songwriter. Jillian Banks (where the BANKS moniker obviously comes from) has been a rising star both on the blogosphere as well as traditional music formats. Her alluring vocals and divulgent lyricism has continued to entrap listeners; she is now ubiquitous online through a bunch of hot remixes posted by DJs and producers on Soundcloud.

Producers and DJs love her voice and the music she’s already done. Her debut album Goddess has a smathering of emerging artists touching her tracks including Shlohmo, Totally Enormous Extinct Dinosaurs, SOHN, and Jamie Woon. So now it’s time to see if she’ll successfully translate into the bigger leagues.

She has already played the larger stages at Coachella, Bonnaroo, and more. She’s already opened with the Weeknd on his 2013 tour. She has already been featured by the BBC, MTV, Billboard, iTunes, Spotify and more as an artist to watch out for. Let’s see if this private, dark, songstress can truly breakthrough to wider success with everything she has supporting her.

4. 'Email' contests@showsigoto.com with your name, and put the Artist Name as the subject.