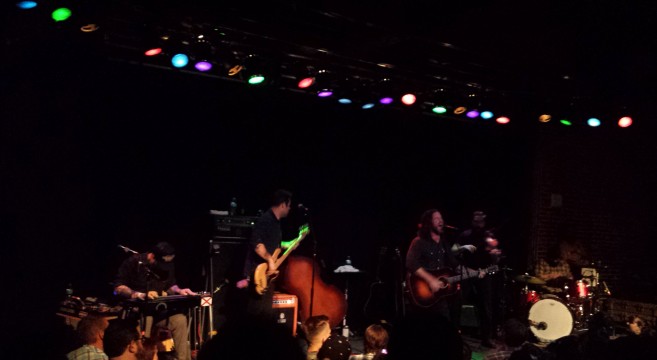 Last night was the first time I cried at The Social. Luckily, whiskey was there to wash the tears away. $50 worth. “Can you keep a secret?” Bartender Brian asked me at 2am a few weeks ago. “Yes.” I replied. “Well, I’m going to ask Alysa to marry me at the Chuck Ragan show.” It just gave me chills writing that. At the end of Bartender Brian’s set, he asked the sound engineer at The Social, “Fedge, do I have time for one more?” Alysa, who performs with him, gave him a puzzled look onstage. He smiled at her and Fedge nodded with approval. Brian turned his music stand towards him, flipped a few pages for show, and began the best proposal I’ve ever seen in my life (internet videos included). He positioned himself directly at her and sang his heart out through a smiling beard. “This song is for you and only you, like my love for you, darling it’s true.” As tears rolled down my cheek, I tried not to make an ugly cry-face or any noises. “In your arms I want to spend the rest of my life” he continued. Goddammit – I’m crying watching the video trying to figure out the fucking words.

The last lyrics of the song were “Alysa, will you be my wife?” Brian spun his guitar around to his back, reached into his flannel shirt pocket, took a knee and looked up to his beautiful bride to be. She covered her mouth and nodded yes. I recorded the whole fucking thing. You can hear my cheers. Check out Bartender Brian’s song I titled “For You, Only You, My Love” below.

Here’s a few of Bartender Brian’s songs. Please download “Only A Dream” and go buy him a drink or three at Lizzy McCormack’s Irish Pub downtown. “Only A Dream” is available for free download here.

If you’re familiar with the band Social Distortion, Jonny Two Bags is far from a stranger. Jonny and his band took the stage right after Bartender Brian and played a mix of southern California surf-rock songs from his first solo album, Salvation Town, released April 1. I must admit, I was still reeling from the recent events that just took place so I was heavily involved in congratulatory shots. However, Jonny’s first single off Salvation Town is a must listen. It’s called “One Foot In The Gutter” and is something I would listen to in the car on the way to a nice day at the beach.

Chuck Ragan didn’t do The Revival Tour this year. Instead, he released a new solo album and had a song featured on CMT.com! He still managed to bring the amazing Joe Ginsberg and Jon Gaunt on tour with him though. Chuck played to a nearly sold out crowd at The Social and we sang along. Loud. To favorites like “The Boat” and “California Burritos.” Check out the raw, perfectly directed video for the song I can’t stop repeating in my head, “Something May Catch Fire” below. It’s the first single and the opening track to his beautiful, soul filled 4 out of 5 Star album, Till Midnight.

As Chuck’s voice echoed off the walls at The Social, I began to miss Rocky Votolato. Rocky happens to be my absolute favorite singer/songwriter and Chuck invited him on the entire Revival Tour around the world last year. The Orlando date was such a fucking great show. A Florida native, Chuck also fronts the Gainesville punk-rock band Hot Water Music and often covers Hot Water songs during his solo sets. Sadly, Orlando didn’t get any Hot Water covers this time. Then again, the man is promoting the release of his new album (and his best to date) so it made sense not to play HWM covers but didn’t keep me from hoping. 🙂 Here’s a shitty pic: 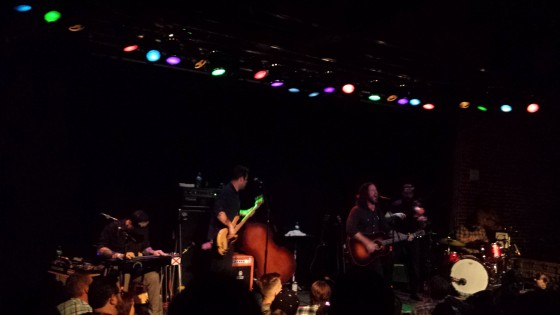 Catch Chuck Ragan on the road in the U.S. before he heads overseas for a month. Dates below.