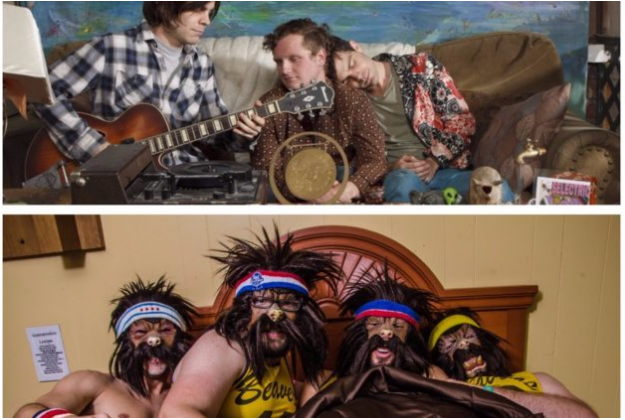 Everything is better in two’s. Alcohol. Bands. So, we’re pairing up two Ten10 Fest bands every week to put you inside these artists’ minds and processes. The furry foursome are known for their hair-raising rock and unforgettable live show. What is it really like to be a teen wolf, though? The punk wolves from St. Petersburg let us in on their secrets.

Shows I Go To: So, we’re making Wolf-Face into a beer? What are you guys going to taste like?

Wolf-Face: At long last, we may have found the fountain of youth, and it’s #42 Golden Ale! Did the Solar Eclipse/ totality affect your moon cycles? How exactly does being a teen/adult wolf work?

Wolf-Face: Wasn’t the eclipse awesome?! But let’s be real, the moon deserves all the credit. A true underdog story stealing the sun’s spotlight like that. That sort of epitomizes the spirit you need growing up as a teen wolf.

SIGT: Do you only morph when you play music?

Have you ever heard of Butt Water?

SIGT: What’s the hairiest situation you’ve ever gotten into during a show?

Wolf-Face: The first thing that comes to mind was actually at our very first Orlando show. We had just started our cover of No Bunny’s “I Am A Girlfriend” at Uncle Lou’s when some turd, probably a prankster sent by the Dragons team, steals a tambourine and tries to make a run for the door. What happened next was like one of those Quicksilver movie scenes. We barely skipped a beat getting that tambourine back.

SIGT: What are your favorite/least favorite aspects of the music scene in Orlando?

Our den is in St. Petersburg, which is a great scene to call home. But, Orlando gigs definitely have given even our hometown shows a run for their money. Plus, you guys have Sneaky D’s aka Wally’s! Not to mention the Piss Detective at the 7-11 on Colonial. That guy is unbelievable! SIGT: If you could have three artists play at your funeral (dead or alive) who would it be?

Wolf-Face: Hopefully the 4J’s could be convinced to reunite to turn tragedy into party. And let Metallica know they aren’t welcome—at least not Lars.

Here’s some shots we caught of Wolf-Face at Will’s Pub last year: Sonic Graffiti is most likely to play your town’s gentrification rally and set some stuff on fire. Their gritty soul rock will throw you headlong into a dreamscape of sickly trippy proportions. The three piece from St. Pete, or St. Creaturesburg as they call it, are some of the baddest musicians around Florida. And, by bad, I mean sickly good.

The three guys paint sounds you’d see behind your favorite dive bar. Loud, mixed, sharp colors with psychedelic shapes and protuberances. Sonic Graffiti’s music will have you seeing double, triplet-y visions of garage noise rock goodness. They’re as interesting off the stage as they when they’re ripping it out and they’re trying to see who can die first. Ultimate shredder’s heaven.

Drew: A whiskey with purple nugs on top and maybe some lean. It’d be dank. SIGT: Is there any specific characteristic of St. Petersburg, or Florida, perhaps, which you feel like has imprinted on your music?

Heat stroke, mosquitoes, downers, the crushing feeling to get the hell outta here.”

Drew: Well, Ohio doesn’t quite look like a cock…

SIGT: How have your processes in creating music grown and changed since Friendly Unit Creation Kit ?

We made F.U.C.K. all live in one take with very little overdubs when I first started the band. Since then, we’ll make albums by any means possible. There’s no proper way to make a song or album just make them, come over with a hair brush, dental floss and matches. I can write and record you a nice lil diddy with all that.” SIGT: Your artwork is always incredible. Where do you pull inspiration from? Do you work with the same artist?

Drew: Cameron Cottrill made the yellow sonic boy and red sonic girl. Sebastian Cooliage made our “fuck the police fuck the Jesus freaks” single art, Katie Lacker did our debut record cover as well as some posters and I made the covers for our S/T album and Loner.

SIGT: If you could have three artists at your funeral (dead or alive) who would they be?

Drew: Chris from Sonic Graffiti because we are racing each other to the grave and I wanna beat him and Jimi Hendrix and James Brown because, if I’m dead I can jam with them now?