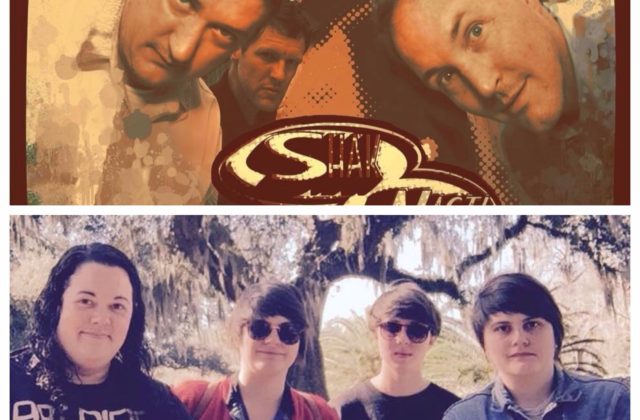 Everything is better in two’s. Alcohol. Bands. So, we’re pairing up two Ten10 Fest bands every week to put you inside these artists’ minds and processes.

These are all good questions. Questions to send out into the ether and hope some sort of signal reaches any lifeform who can answer our burning inquires.

Here’s what we do know…. Shows I Go To: So, what is your go to beer/drink at a gig? SIGT: You guys have been a staple in the Orlando music scene for several years now. How has it changed since you first started playing?

Ripped a hole in the space time continuum and got sucked into a really shitty alternate timeline, where Trump is the POTUS, Alex Jones is legitimized, and the “cash me ouside” girl is signed to a multi million dollar record deal by Warner Bros.”

SIGT: What’s your favorite venue to shake up in Orlando? SIGT: Describe a typical Shak Nasti rehearsal. What is your writing process like?

SIGT: You’re also playing Hulaween this year! Congrats! I can’t wait to groove in the woods with y’all! What’s your best camping advice?

ML: Make sure you have enough party supplies and good music.

filmed by our own Richie Williams “The Sober Goat”

Wet Nurse is the brainchild of Orlando twins Nina and Susanna Chaplin. Add in Vanessa Brewster on drums and Baile Yeager on guitar, and you’ve got the wildest women in town. The first time I saw Wet Nurse was on the back patio of St. Matthew’s Tavern. I was also in a snapchat story next to one of my friends who puked amidst his long hair outside the bar. Coincidence? Probably not. These girls always bring high energy and poppy tunes for the moshing and moving. Their garage punk attitude is not faked but rather caked in the genuine grime of Orlando’s great punk scene. They’re at the forefront. Shows I Go To: So, what is your go to beer/drink at a gig?

I’m cheap and easy and it’s always Rolling Rock! The taller the tallboy the better.“

Vanessa: I remember having to throw everything I wore that night due to the unshakeable smell of smoke. Just kidding it’s always a good smelly time. SIGT: Describe the music scene in Orlando in three words.

SIGT: I love the artwork on your 2011 7″ split w/ Lazy Boyzzz! Do you often get the chance to collab w/ other local artists?

Vanessa: Yeah we make it a point to always collab with amazing artists on our art, photos, videos, etc. We know so many talented people!

SIGT: Where does a Wet Nurse song begin?

We joke and call them “noodles” but basically just small riffs or melodies that we’ll flesh out into full songs. We rarely start with the words but sometimes it happens. Some thrive and get added to our set while others go back into the vault if they’re just not quite right in case we need inspiration later.”

SIGT: What are y’all listening to right now?

Vanessa: The new Alvvays record is incredible! The shiny guitars and harmonies are a big influence lately for sure.

SIGT: New music on the horizon?:)

Vanessa: We’re working on it! It’s a slow process for us and we’ve never been a band with a pile of songs that we can choose from to record. We’re pretty methodical and perfectionist about what we do so it will happen, just on our own time.