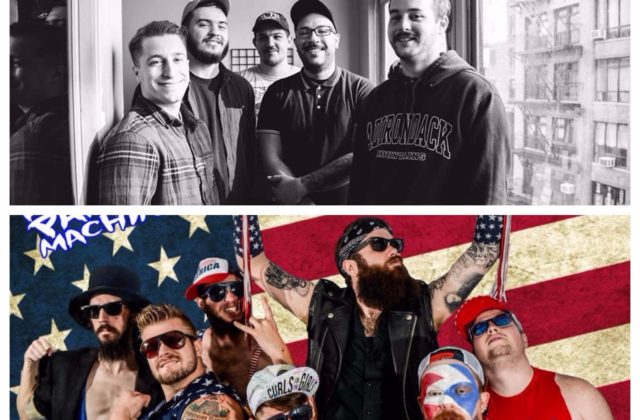 Everything is better in two’s. Alcohol. Bands. Something that you may need to have a Florida fake ID for if you’re under the legal age to drink and go to concerts. You wouldn’t want to miss out, would you? But if you’re old enough, then alcohol and bands together is an ideal scenario. So, that’s we’re pairing up two Ten10 Fest bands every week to put you inside these artists’ minds and processes.

Hungover has been primed for a spot on Warped Tour since their inception as a band in 2013. They’ve packed venues all across Florida with their brand of sweaty, pop punk music. If there were any music to shake a well, Hangover, these boys would be the triumphant soundtrack of a pep talk for another rowdy night out.

Shows I Go To: So, if Hungover were a drink, what would you taste like?

Hungover: We’d probably be a Whiskey Sour. A mix of sweet and sour that will satisfy your taste buds, but get you riled up once you’ve had a few.

SIGT: What’s your go to beer/drink at a gig?

Hungover: PBR is always a go-to (and usually the cheapest beer at the venue). Any whiskey drink if we’re feeling frisky. Gabe is definitely a big fan of Gin & Tonic, as well. Austin once woke up with a gnarly hangover after a night of heavy drinking and slipped/fell in a puddle of his own vomit.”

SIGT: The local scene has really launched you guys to be able to tour and have a reach outside of Orlando. What’s your favorite thing about our city’s music scene?

Hungover: They always bring the party. Whether it’s a floor show at St. Matt’s or the House of Blues, the energy is always there and it’s always through the roof. The crowd at a hometown show is just as much a part of it as we are.

SIGT: Your shows get pretty rowdy! What is the craziest thing you’ve seen in the crowd?

Hungover: That’s a tough one! We’ve seen some people go pretty wild and it’s tough to pick just one instance. There’s always plenty of stage dives, mic grabs, and crowd surfing. Seeing the Nagy twins do flips into the crowd simultaneously is one that always sticks out in my memory. SIGT: I love the video for “Girlfriend!” It looked like so much fun destroying all that shit. Where did the vision and inspiration for the video come from?

Hungover: Every past relationship has a story and sometimes when you look back on them, you realize that things may have been a little more out of control than you thought they were at the time. Our director Joe Desantis is also a true visionary and contributed a great deal.

SIGT: I think the Pop Punk genre has helped eliminate a lot of the stigma surrounding mental health and created a conversation and platform for people to seek solace through this music. Your music is raw and honest. What’s most important to you when writing and creating? What message are you trying to give fans?

Honesty is definitely a number one priority. We want to make sure that the listeners know that these songs are about real emotions. Everyone struggles and sometimes you can find solace in knowing that you’re not alone. Someone else knows what it’s like to feel how you feel. It’s okay to not be okay.”

SIGT: If you could have three artists (dead or alive) perform at your funeral, who would they be?

American Party Machine knows how to f*cking party. That’s a given. If you haven’t seen this metal spectacle around town, you’re missing out. Each live show drags you into their world which is an insane mix of wrestling and Southern rock metal music. Just six blunt blazin’ dudes trying their best to make Ric Flair proud. But, who does the best “WOOOOOO!” ??

Shows I Go To: So, we’re turning American Party Machine into a beer, what are you guys going to taste like?

American Party Machine: A true melting pot of everything that’s good about the U-S-A. Although we hope it doesn’t taste like us, because then it’s probably just bong water. SIGT: APM has derived a lot of inspiration from famed WWE wrestler, Ric Flair. Who does the legendary ‘WOOOOO!’ the best?

Anyone who feels the call of the wheeling, dealing, kiss stealing, styling, profiling, limousine riding, jet flying, Nature Boy in their bones can deliver a true “Woooooooooo!”

SIGT: What’s the most amazin’, blunt blazin’, hell raisin’ thing to ever happen at an APM show?

Donald Trump has come out to condemn The city of Orlando for American Party Machine placing in two categories in Orlando Weekly's best of Orlando 2017 awards. APM responds diplomatically … by putting Trump through a table!Tag your friends who would love to do the same. Woooooo!!!!!Video shot and edited by Gnarley Visuals.

SIGT: Any pre-show rituals to get you guys pumped up?

SIGT: New music on the horizon for all the Party Machines(unofficial fan name*) out there?

APM: Our new LP “Politically Erect” is in the works and should drop early 2018.

SIGT: If you could have three artists (dead or alive) perform at your funeral, who would they be?