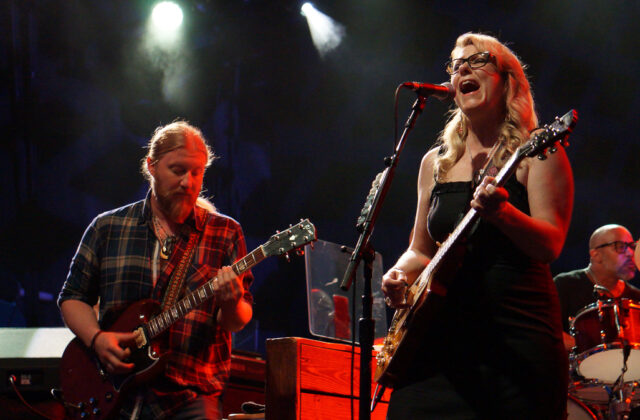 Summer months are usually a time for tanktops and Reggae music.  This weekend is a little different.  The “Wheels of Soul Tour” is turning and three awesome bands are quickly approaching the St. Pete area!  Shovels & Rope, Blackberry Smoke, and the world famous Tedeschi Trucks Band are all together at Al Lang Stadium for an afternoon of Soul and slide guitar!

I arrive to Al Lang Stadium and find a gorgeous field with a huge stage set up on the far side.  The venue is an old baseball stadium that has been converted for the city’s soccer team.  It’s a great spot for a concert except — there isn’t any shade, use of the stadium bathrooms is prohibited, seats and water fountains are out of bounds, and free water isn’t available.  Blankets and people litter the AstroTurf, waiting for the show to begin. Shovels & Rope is the first group on stage and it’s sweaty hot.  Husband and wife combo Michael Trent and Cary Ann Hearst’s uptempo folk is a great help to deal with the summer heat.  The crowd moves and shakes to their music, including the 2013 Americana Music Association’s Song of the Year, “Birmingham.”  The sun begins to set, and I’m soaked from sweat.  The breeze from the Gulf is small consolation for the sweltering conditions.

Atlanta’s Blackberry Smoke is up next to take the stage with their Bluesy, Country/Rock music.   Takin’ it easy, the guys play a chill set that includes “One Horse Town,” “Run Away from it All,” and Elton John’s “Burn Down the Mission.”  Their style of play keeps reminding me of the iconic Lynyrd Skynyrd and wouldn’t you know it, they cover “Mississippi Kid.” I head to the bathroom during the break and find adults hiding under the stands and in the port-0-johns, just to catch a moment to smoke a cigarette.  You know something is wrong at a venue when you see paying customers sneaking around just to smoke in a place serving alcohol.  It’s ridiculous to expect people to drink and not smoke. I get back out of the hot and smelly bathroom to rejoin my friends for the main event — Tedeschi Trucks Band.  2010 is when this 12-piece blues and soul group formed in Jacksonville, FL.  Led by married couple, Susan and Derek (formerly of Allman Brothers Band 2.0), TTB’s debut album, Revelator, won the 2012 Grammy Award for Best Blues Album.  The set begins with “I’ve Got a Feeling” and just like that everything is better. Susan Tedeschi’s beautiful raspy voice instantly soothes my troubles and we launch into a classic Derek Trucks guitar solo.  His slide guitar skills are the reason for the evening.  I can hear the crowd sigh in unison with an audible “Ahh” as his first few notes cause the crowd to sit back like they had a sip of hot cocoa on a cold day.  Next, they flow into the B.B. King cover “How Blue Can You Get.”  Mike Mattison, formally the lead singer of Derek Trucks Band, stepped up to the microphone and leads the next song.  His strong voice is a great change of pace and he lets way for Susan to wow the crowd with her guitar this time around.  Her solo peaks and peaks before leading fans back around the bend to the chorus again.  A few songs later they make space to get low and slow.  Their sultry sounds resonate throughout the stadium, bringing couples closer together.  They hand the baton back to Trucks who brings us back home with his sweet, squealing strings.  The crowd cheers with approval as they return to full volume during the rarely performed, “Save Me.” “Laugh About It” is next, and Susan’s voice is again the main attraction.  Her vocals soar as she sings from their 2016 hit album, Let Me Get By.  In the middle of covering a classic John Prine song, “Angel From Montgomery,” they quietly switch songs during the jam portion and land at the tail end of the Grateful Dead’s “Sugaree.”  What a killer song!  Next, they move on to their newest hit from their most recent album Signs, “Shame,” which they recently performed on Jimmy Kimmel Live.

Trucks takes this song out for a long ride.  He ratchets up the intensity carrying the crowd and his band on his back as we climb to the top of the mountain.  There I can see the entire fireworks show that is Derek and Susan battling back and forth on guitar.  Like the finale of an Independence Day show, it seems like there is no end to the explosion of talent on this stage.  Slowing down again, Derek and friends are soothing and calm.  I am in heaven when they eventually arrive at the last song for the set: “Midnight in Harlem.”  They close with “Bound for Glory” and a song called “Show Me.” I can’t help but feel like I’m floating down a river.  I’m in a kayak by myself, taking in the beauty of nature as the sun sets just beyond my view.