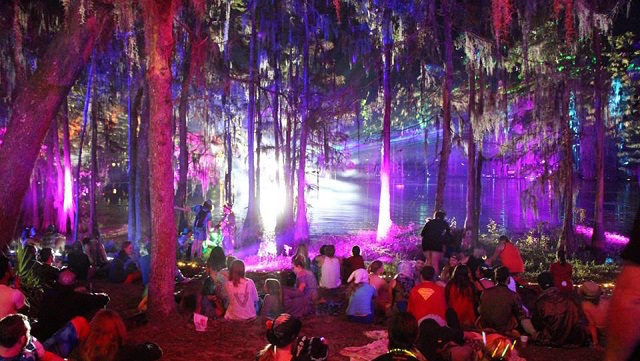 The ethereal quality of wandering through campsites well after dark. The mutual admiration each artist expresses for the next. Something more than just physical warmth radiating from the amphitheatre, down the dusty roads, and into camp.

The symphony in the bird sanctuary is the flapping of wings and chirping of beaks. It is the clink of pots and pans as folks clean up breakfast. The sweet music of Kay Taylor playing her auto-harp.

Unlike most festivals, the energy is not patently sexual. A deeper current of love and respect runs through the day. The vibe is family oriented in the most wholesome of senses.

On the way back to camp Friday afternoon, to recharge and refill, a man sits in a solitary chair framed by three pine trees. He plays the banjo while his kids throw a frisbee, run around an open field, and blissfully laugh. On the way back to the venue his daughter has climbed in his lap and is strumming at the instrument. She can’t be more than two years old.

The curtains on the window of a pop-up Airstream camper are brushed aside. A tiny face, maybe a year old, presses against the window. She closes a fist over and over as if she has yet to recognize her opposable thumbs. I wave in kind.

A man sits next to me just before Verlon Thompson goes up to regale us with stories of his time as guitarist for Guy Clark. “Are you a fan of that band?” the man asks. My t-shirt reads “Drive-by Truckers – Original Bitter Southerners.”

You know the song that says something about your daddy being the pastor at the Salem Church of Christ?” he continues. I do. “My wife is the girl in the song. See the woman down there in the pink visor? Whatever that guy’s name is tried to date her and she wanted nothing to do with him. So she kinda became a character in his song.”

Verlon Thompson takes the stage. He has been a guest on The Marinade with Jason Earle and our paths freakishly cross in strange places. I love him and his music. The beauty of the human condition is rarely so clear as at a Suwannee Festival. People like Verlon illuminate the good in us all. Time always slows at the park. Today we seem to be wading through melodic molasses.

An older gentleman on a rascal comes flying in to catch Verlon’s set. His machine gets bogged down in the sand. Two guys jump up from their seats and push him out after he dismounts and uses a cane to get to his seat.

Verlon’s first tune is a Guy Clark song. Verlon talks about half as much as he plays, which is how we like it. Verlon Thompson is a national treasure. He tells of Guy’s workshop. Guy had a swivel chair. He would write songs on one table, then swivel over and make guitars on the other.

Back to the camp to make some dinner and take a break. We learned a long time ago to quash any fear of missing out on sets. Camp is where you mine the good stuff. A man walks up and says hello. His name is Paulie. Before long he has pulled up a chair, set down a bottle of whiskey, and opened up about seeing James Brown and Neil Young and Crazy Horse at Suwannee in the 1990s. The Godfather of Soul would dance across the stage and run off to the wings for some oxygen. Paulie does not make his way to the venue very often these days. He prefers conversations at camp to sets on The Porch.

Donna the Buffalo and Jim Lauderdale are playing together. I find myself wishing they would just tour and record together full time. Jerry Douglas of Alison Krauss and Union Station fame plays a set of Flatt and Scruggs tunes. The great Shawn Camp is on guitar and vocals. Camp played a surprise gig at Verlon’s wedding several years ago. The sound of fiddle music unexpectedly came from the trees as Verlon and his wife Demetria went to say their vows. Family rules the weekend.

Wandering around the gorgeous Spirit of the Suwannee campground late at night is among live music’s great pleasures. Lanterns hang from the trees illuminating campfire jam after campfire jam. We wander back to our own camp and fall asleep to the sounds of Donna the Buffalo’s late night set.

Peter Rowan is kicking off Saturday morning in the Music Hall. We had the honor of speaking with him just a few months ago. Rowan played with Bill Monroe AND Jerry Garcia. The magnitude of his accomplishments is anxiety-inducing. He is brilliant and still able to connect with an intimate audience. He stops to take questions from the crowd. People ask about his guitar. Wonky instrument talk leads to stories of playing in Slovakia at a beer garden.

Rowan has been living and recording in Hawaii. He tunes his guitar to a Hawaiian tuning and plays beautiful Hawaiian melodies. It is only noon.

Jim Lauderdale and Verlon Thompson are up next. I head back to camp for a sandwich, maybe a brew. Kay is playing her autoharp. I tell her of my anxiety at not being bad ass like Peter Rowan.

She makes me feel like I am more significant than Teddy Roosevelt.”

Turtle Duhks take the stage in mid-afternoon. A fella wearing goat legs and a hat with horns sticking out of it has the words “Sea Goat” written on his arm. Hopefully, it is a tattoo and those legs are surgical implants. He dances with a huge goat smile on his face. I half expect him to yell in ecstasy. (It definitely wasn’t The Sober Goat.)

Turtle Duhks are predictably gracious and wonderful. They gush about the crowd and the spirit of the festival. Hot Buttered Rum is next. They play a delightful mix of bluegrass and rock. They are also the nail in the coffin of my weekend. Real life awaits on the other side of tomorrow. I head home much earlier than planned.

Jeff Mosier told me his family has a word for the post-festival blues. They called it the “Mag Drag” after the letdown they felt upon leaving the old Magnolia Festival at Suwannee. The names of the fests may change but the spirit is eternal.

The drag hits as soon as I arrive home. A lull was anticipated and I am thankful to have come home a little early. It takes at least a day to figure out why everyone is not smiling and there are not men dressed as sea goats dancing with women wearing butterfly wings at your local grocer.

There must be a balance to these extremes. We do not have to live in a buttoned up, polarized world; but maybe day-drinking and walking around barefoot are conditions better left for a weekend among the live oaks.

Suwannee continues to cement its reputation as the happiest place on the planet. Thankfully, it was announced this weekend that Spring Reunion’s sister festival, Suwannee Roots Revival, will be back for another year in October. No guessing about whether there will be fiddles and banjo rustling the trees. We will see you in the Fall.