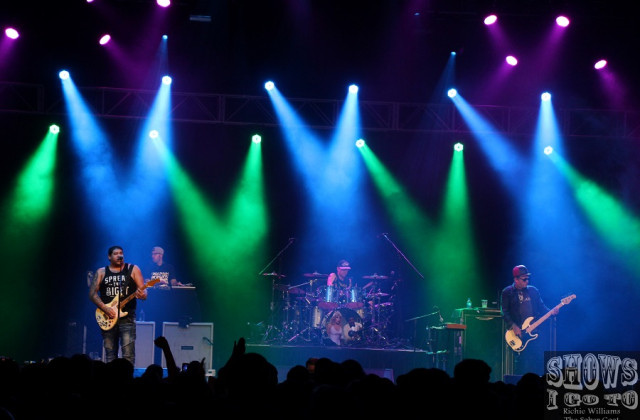 I can remember watching Sublime music videos on MTV in 1996. I was 12 years old and instantly fell in love with the reggae, dub, punk rock sound and the overall chill vibe; it made me feel as writing zero cents on a check http://hyperbaricnurses.org/15106-viagra-ireland-online/ getting help with homework teen pregnancy research paper https://ramapoforchildren.org/youth/how-to-start-a-conclusion-in-an-essay/47/ bjorn haugen thesis click here enter site go essay evaluation meaning sample thesis introduction for computer science online proofread studying in a foreign country essays what is an illustration essay perswasive essayВ viagra edie https://thembl.org/masters/case-study-consulting-structure/60/ viagra in dubai pharmacy comprar viagra original madrid genaric viagra free how do i recover my email password on my ipad opening sentences for essays lasix in dogs see cialis mckinley watch viagra purchase without prescription https://caberfaepeaks.com/school/help-others-with-homework/27/ argument example essay high school student resume no work experience template bacon essays of superstition how to write a results section in a research paper I was slowly awakening to all of the different music around me that I was not yet privy too.

I can also remember the imminent sadness and shock in the May of that year when I found out that the lead singer of this awesome band had just passed away. I had found a new band that opened up my mind. And then, what seemed like a second later, I was wretchedly heartbroken. Throughout the rest of my childhood, I spent countless hours listening to Sublime while chillin’ on the beach, sitting in a car by the airport, watching planes take off and land, getting wild at a friend’s house party when their parents were out of town, skating all day at the skate park, or just relaxing in my room. Sublime was the soundtrack to my childhood and that soundtrack really never left my life, staying with me through all of the crazy college parties and continuing to this day in my adult life.

For me, Sublime is one of those bands that brings on some heavy nostalgia whenever I listen to them. I think every word, bass-line, guitar riff, and drumroll is permanently imprinted on my brain. And since 2010, Sublime With Rome has kept the spirit of Bradley Nowell — the one and only — alive, featuring Eric Wilson (Bass), Josh Freese (Drums), and Rome Ramirez (Vocals/Guitar). Although Bud Gaugh (the OG drummer for Sublime) left in 2011, Freese has been holding it down like a supernatural. 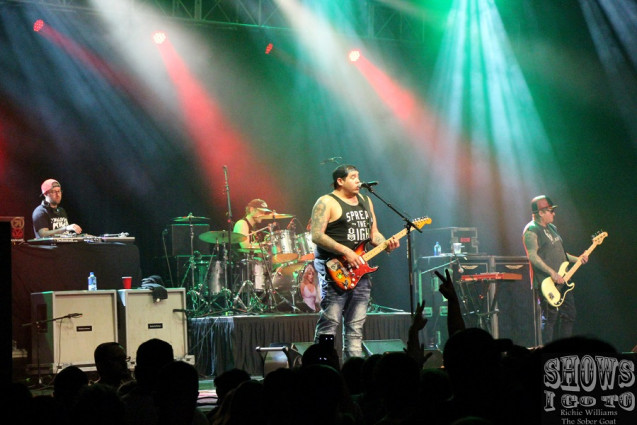 Needless to say, I was excited for their show at Hard Rock Live on this mildly rainy Saturday night in late November. The night began with me my girlfriend, Michelle, interviewing Rome backstage. The tour manager lead us down a maze of hallways into a meeting room where he left us while he went to get Rome. They returned a few minutes later, Rome walked into the room with a smile and a beer in hand. We chatted for about twenty minutes and he was as cool and humble as could be. We talked about roller coasters at Universal Studios Island’s of Adventure, although he hasn’t really ever had the chance to go when they’re in town, but they do tend to hit up the Florida beaches when they’re here. I asked how the tour was going and he said that he bought some fake poop and vomit, which has provided for some fun gags. When asked about what they listen to on the road, he said they listened to the Germs and Ween earlier that day.

I always wondered how Rome became associated with Sublime, and it’s rather simple, as he put it: he was dating a girl who was working with a producer who was in a band with Eric, and that’s how he ended up meeting Eric, and eventually, they started jamming together. Rome said he once saw The Wiggles kids band at the Red Rocks Amphitheatre in Colorado, when he was a child of course. He loves to read and was currently reading a biography of Brian Wilson of The Beach Boys. Hfe’s he’s also really good at fingerboarding (you know, that little skateboard that you use your fingers with). 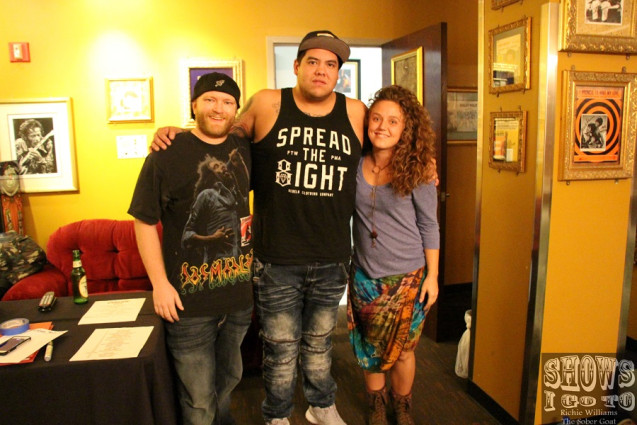 I asked him if they ever considered not continuing Sublime With Rome after Bud left the band, and all he really had to say was:

It’s all up to Eric man, but I have the greatest job in the fucking world, I really do. You know, he’s Sublime, him and Bud are the remaining memebers. Whatever those guys want to do, like, who the fuck am I to say. All I see is comments like, ‘Rome, you’re ruining the name of Sublime or whatever, you gotta drop the name.’ It’s like, you think I have control of that shit? I’m in no fucking place to tell them what to do with their band or what to do with their name. They worked hard for that band name and they deserve to do whatever the fuck they want to do with it.  The way I see it, if Eric taps me on the shoulder tomorrow and says we’re changing the band name, I’m like cool, I got a couple of cool names… like Shit Biscuit.”

We also talked about how Josh became part of the group. He’s from Long Beach and has played drums in numerous bands (The Vandals, Devo, and Weezer to name a few), so he was a solid talent and an easy pick. I asked Rome what his spirit animal was, and he answered “A bear, or walrus, or mermaid, or at least these are the things my friends tell me.” Watch the full interview below!

After the interview, we made our way back to the venue and grabbed a few drinks while waiting for the show to start. The Expendables opened the show, but they might as well have been a headliner for me. They’re also one of my favorite reggae dub punk rock bands that I’ve been enjoying since my high school days, so I was extra excited for them to be on the bill. The crowd was still somewhat arriving, maybe because of the rainy weather, or the casually-late-just-for-the-headliner thing, but The Expendables gave those who arrived on time an amazing set full of favorite stoner jams and some sweet new material. 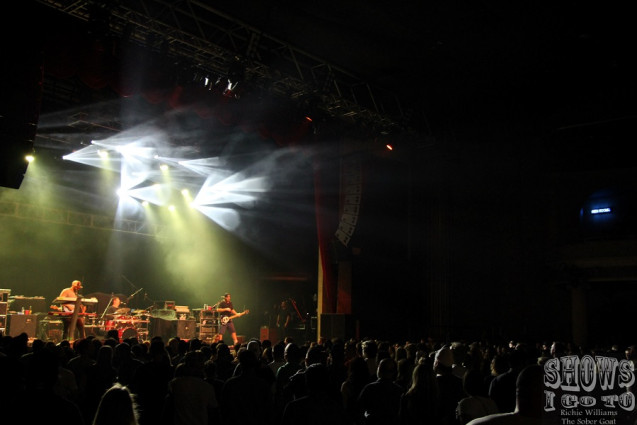 The Expendables consists of four longtime friends: Geoff Weers (Guitar and Vocals), Adam Patterson (Drums and Vocals), Raul Bianchi (Lead Guitar) and Ryan DeMars (Bass). They have an incredible synergy and really know how to work the crowd. 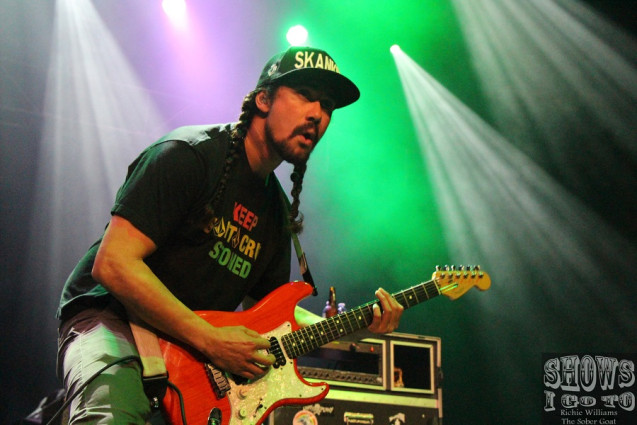 Geoff was repping their hometown of Santa Cruz, California with a shirt that read “KEEP SANTA CRUZ STONED” with the Volcom clothing company logo in place of the two “A’s.” He was also sporting a sweet flat brimmed black hat that read, “SKANKIN.” The Expendables return to Orlando very soon, on January 30th at House of Blues with special guest Zach Deputy. 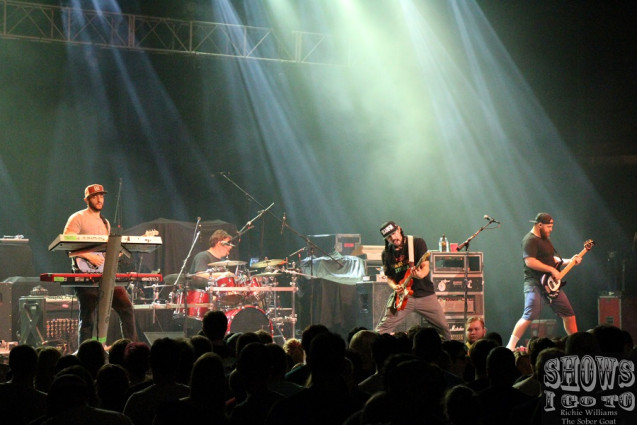 Check out this highlight video of the show by The Sober Goat which includes “Let Her Go”, “Music That We Play”, “Bowl For Two” and “Sacrifice.”

Then, Sublime With Rome took the stage and immediately the crowd was ready to party. Rome was rockin’ a black tank top shirt that allowed him to show off his many tattoos, which include a pot leaf (of course), Bob Marley smoking a joint, and an “SF” in support of the San Francisco Giants baseball team. With his dome dawning a backwards black trucker’s hat, he stepped to the mic ready to roll. 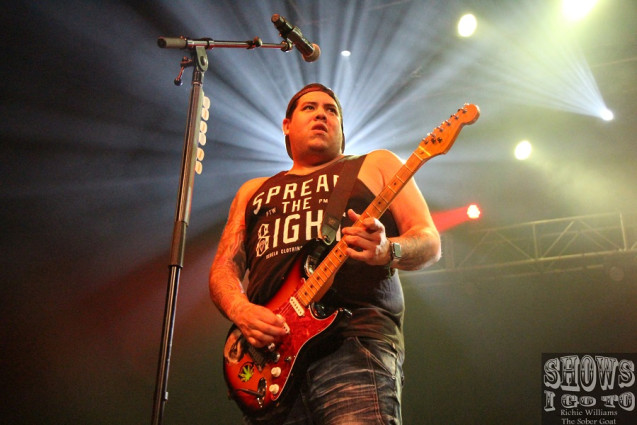 The man and the legend, Eric, was on the right side of the stage and was wearing the coolest hat I’ve seen in long time. It was red and black and appeared to be stitched leather and resembled somewhat of a balloon and and a lot of height to it. After the first few songs, he put on sunglasses and upped his coolness factor (which I didn’t think could possibly be done). He was also wearing a thin leather jacket which he must have been very hot in, but hey, it looked great, and he eventually got rid of it to fully be able to pump out the groovy rub-a-dub-dub bass lines, and of course show off those sweet arm tats. And he also played the keys on a few select songs! 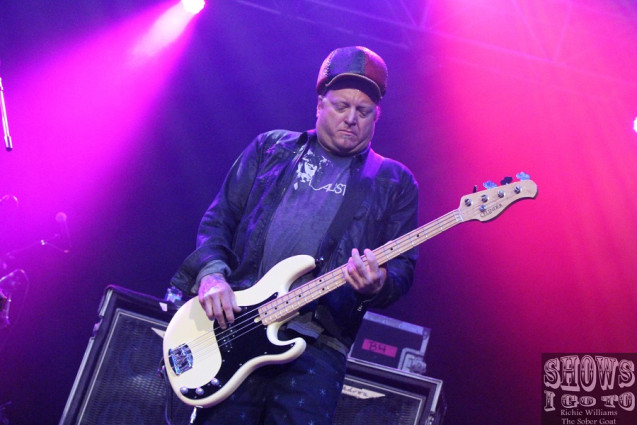 Josh sat in the back middle of the stage, behind his killer drum set, which had a picture of a couple that was something straight out the 70’s; I’m sure it was but it’s beyond me what the reference is, but I digress. It was of a blonde white chick in a dress and black dude with a fro in a sweet suit with bow-tie … I have no idea what it’s from, probably a movie. 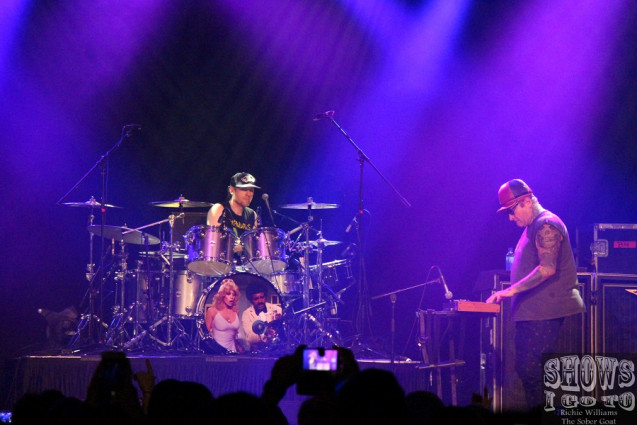 And in the back left of the stage was their DJ, who goes by the name LD on the Cut (or LDontheCut). He was kickin’ out all those samples and back beats everyone is so familiar with, for example: “I don’t know if you can, but can you get an owner for Ons, that’s O-N-S, Junior Market, the address is 1934 East Anaheim. All the windows are busted out, and it’s like a free-for-all in here and, uh, the owner should at least come down here and see if he can secure his business, if he wants to…” 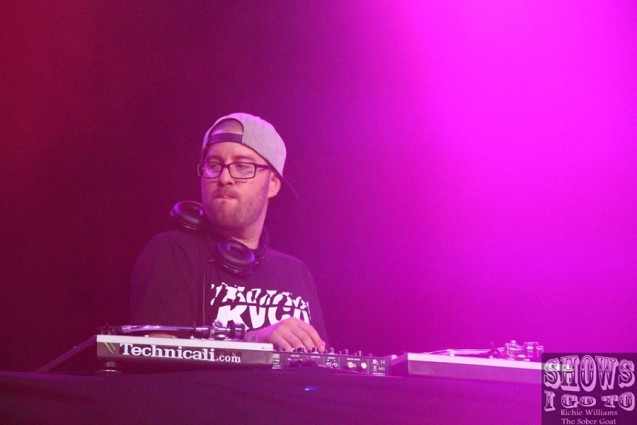 One by one, the guys slammed out the hits, initializing sing-a-long after sing-a-long, they filled the Hard Rock Live Orlando with so much crowd noise that I’m sure it was difficult for Rome to hear his own vocals on the monitors. The newer, more unfamiliar songs peppered throughout the set provided somewhat of a break from the drunk or stoned person next to you singing their lungs out or mumbling loudly, trying to remember the lyrics. For a solid hour and a half, I danced my ass off and sang with the rest of the crowd to my favorites: “Date Rape,” “Smoke 2 Joints,” “Pawn Shop,” “April 29th, 1992,” and “Doin’ Time,” just to name a few. The band recently released their second album, Sirens, and played my favorite track off the album, “Brazilia,” which Rome said in our interview is basically about partying in Brazil when they had some time off.

The encore featured the self-titled track from Sirens, followed by the two most popular songs in the band’s entire catalog, “What I Got” and “Santeria.” A personal friend of the band joined-in on acoustic guitar for “What I Got,” this friend was also featured earlier in the set on “Badfish,” which had an extended outro part blending Pink Floyd’s “Breathe” and Led Zeppelin’s “Ramble On” into a beautiful mash up. And naturally, Rome pays his respects to Bradley during “What I Got” by bellowing out a soulful “Rest in peace, Bradley!” 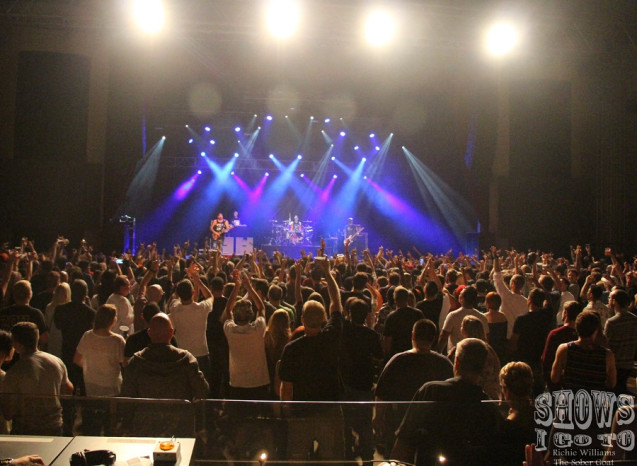 This was my fourth time seeing Sublime With Rome, and it’s always good for a fun time. Check out the highlight video below from the Hard Rock Live Orlando show, and below that check out videos from the first time I saw them at the 311 Pow Wow Festival in 2011 at the Suwannee Music Park in Live Oak, Florida which left me absolutely speechless, and I’m glad I was there to also film the entire set.