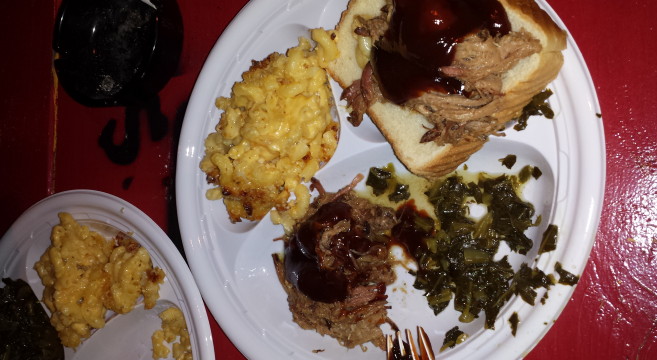 My friend Johnny Knuckles invited me to experience Southern Fried Sunday for the first time. The first time I heard a Matt Woods song, it was at the BJ Barham show and he covered a song called No Beer In Heaven. Check out a clip here or watch the fan recorded video below:

The food is served up about an hour and a half after the doors open. It’s normally fried chicken and sides. This time it was slow roasted pulled pork, collard greens, homemade mac n cheese, texas toast, Sweet Baby Ray’s BBQ sauce. Here’s a shitty pic: 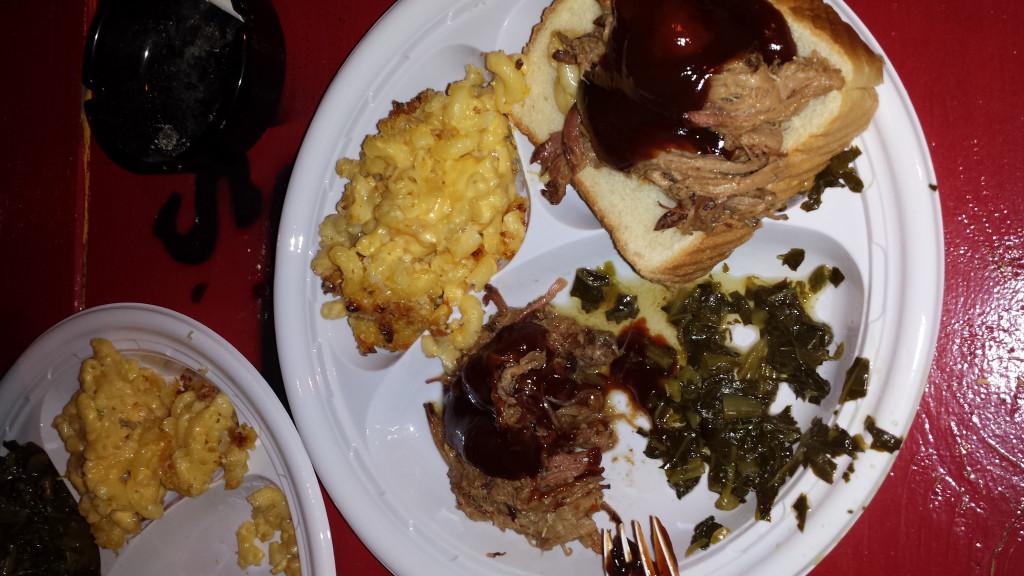 This time it was $8 if you donated a canned good for their canned food drive. I brought a few cans and put them in the box when I got there around 6pm. When I left at 9pm, that box was overflowing. I think it’s safe to say the food drive was a success.

I’ve seen Have Gun, Will Travel a few times. They’re such a fun band! Last year they teamed up with Cigar City brewing in Tampa to co-create a beer. It’s called High Road Ale and even has it’s own facebook page. Check out their song “Standing on The End of The World” by Have Gun, Will Travel Band:

Matt Woods was fucking excellent! Once Johnny Knuckles told me how stoked he was to see him, I knew I couldn’t miss it. And I’m fucking glad I didn’t! Matt told stories and played songs and made us laugh and feel and move. It felt very comfortable watching him perform. It was intimate. Like we were hanging out in a backyard and he wanted to show us some songs that he wrote – and they fucking ruled! Check out the official video for his newest single – Deadman’s Blues below:

At the end of Matt’s set he began encouraging people to go see him at the merch table when he got off the stage. He said “I’ve got buttons, CDs, vinyl, t-shirts, hugs, koozies, ect… Most of that shit cost money… But the hugs are free!”

I dipped out right after that so I could make the drive up to Sanford and catch The Cold Start on their Orlando area tour stop. I’ve seen The Cold Start a few times but I wanted to catch both shows – especially since my girlfriend has went out drinking with the dudes and I several times but still hadn’t caught them live. We drove up to this place called West End Trading Co. and it was the best Cold Start performance I’ve ever seen. They told me they were invited to play SXSW this year! Check out The Cold Start’s SXSW write up.

I’ll be seeing Matt Woods the next time he comes to town for sure. Follow the Matt Woods Music Facebook for tour updates.