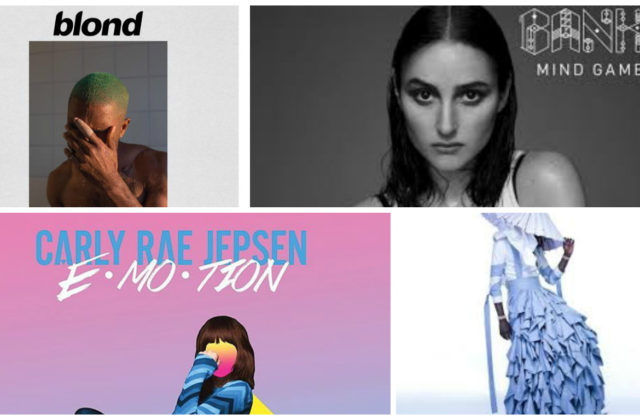 An installation of songs that are not necessarily new this week, though it’s likely they are, but probably just new to us. If you find this list yawningly glib then email us, silly, and lay your music knowledge down, please.

I could just write FRANK IS BACK” and that would suffice for this round of Songs I Groove To, right? I was tempted enough to put: Blond and No, My Name Is JEFFERY and drop the proverbial mic on this post. Alas, there are a few voices other than Mr. Ocean and Young Thug that deserve their spotlight as well.

I won’t even bother to mar this masterpiece with my small words but rather, use this space to start a conversation surrounding the internet since the release of Blond. There has been flack from fans regarding Ocean’s new project and woes over waiting too long for him to make new material. Fans feel as though they deserved new music from him sooner. The grumbling has been severe enough the singer himself took to social media and thanked the people for staying with him during the time off. It wasn’t even really time off so much as creative space for himself. Putting these artists on such great pedestals and demanding music from them is dangerous territory. They owe us nothing. Without us, they would be nothing. The line is fine. Art demands attention but does not need it. It cannot be made under forced conditions — not honestly, at least.

An interesting documentary on J.D. Salinger of Catcher in The Rye fame fell into my lap. The author became a recluse after publishing his masterpiece. He tucked himself away from society and stopped producing any writing. The public was furious. They felt Salinger owed them more. How could he abandon everyone like this? Fans would go to his house, leave notes on his doorstep pleading for answers. One superfan went so far as to go to the town over where the writer picked up his mail and approach him. He cornered Salinger, saying he needed answers about his work. The man was insistent his world would not keep spinning if he did not get what he needed from the author.

Salinger looked at him with just as much insistence, “What do you want from me? I am a fiction writer.”

This work is the artists’ non-fiction about their lives. Every song is a piece of themselves and it is disloyal to tug at their sleeves slobbering for art created out of their greatest pains and joys for our own greedy pleasure. They do not dance for us. Vince Staples spoke on the matter in an interview about his own EP, Prima Donna.

“You’re not a person when you make music. You’re a link. You want to click it. You’re not uploaded yet. What happened, your mom died? Your car didn’t start today. You’re not in a good mood? Where’s my song?”

The more we covet the artists over the art, the less art we will find in our hands.

*Go to Apple Music to stream in full, fools. *

The complex continues. My delusions that I can somehow move my body 1/10 as erotically graceful as Rihanna. Each track on No, My Name Is JEFFERY is titled after one of Young Thug’s idols. This particular track is a shout to the Carribean goddess and a certain song she collaborated on with Degrassi’s favorite rapper. The wordsmith moves with malleability from important cultural references and smooth, sensual puppy dog yelps as he sings over the chorus, “Do the work baby, do the work. Tonight baby do the work, baby do the work.” Young Thug slips through our fingers once again with JEFFERY. The ever elusive factor of what he will do next makes this release even more special. He’s able to keep surprising us from album artwork to featured artists. It feels good to scratch my head a little.

Carly Rae Jepsen – EMOTION Side B

My listening habits have begun to mirror late night Taco Tuesday status — hazy binging. It’s more productive I delude myself to listen to a whole album. (I can’t speak for my heartburn and swollen stomach.) It’s easy to stream Jepsen’s latest EMOTION Side B from start to finish, though. “First Time” opens the flipside of 2015’s acclaimed pop album EMOTION and breathes the life of another pop sensation who sang about virginity. This sister side product is abundant with upbeat ’80s vibes, which has become the singer’s staple now. Her pure voice and sheer range cater to the previous era’s sound with modern joie de vivre and a mullet. I’m not sure if I slipped up on my constant scouring of the internet but the bubblegum was completely stuck on my shoe unbeknownst to me. Jepsen’s B-sides came out of from left field for me. On the opposite side of the Frank Ocean discussion, we have been blessed by surprise albums this whole year. How quickly we forget.

It’s not my intent to project my bitterness onto Banks but something about her stealthy way of weaving airy sopralto vocals, layered over synthetic haunted house noises brings out the green in me. “Fuck With Myself” was the first string of new material from the lithe, Cali born singer. It ushered us forward with futuristic vibes and gave us a twisted glimpse of a new Banks. We’re familiar with her somber, softer side ala “Someone New” off of 2014’s Goddess but it appears she has shed a few layers since then. “Mind Games” has the singer not one step ahead of the game, but at least acknowledging the fact that there is a game being played by both parties.

I believe it’s true, that you would screw me if I let you in my bedroom.”

Her music is the perfect purge of every feeling of jealousy, insecurity, and that disgusting little voice which creeps in (especially during relationships) to whisper sick little nothings in your mind. Banks is equipped with the daggers to nail each sucker that dares double cross her but secretly relishes the little knick that drips blood down her finger as it leaves her hand. “Mind Games” is gloriously sadistic.

Songs I Groove To Vol. 4 by Sarah Schumaker, edited by Matthew Weller.