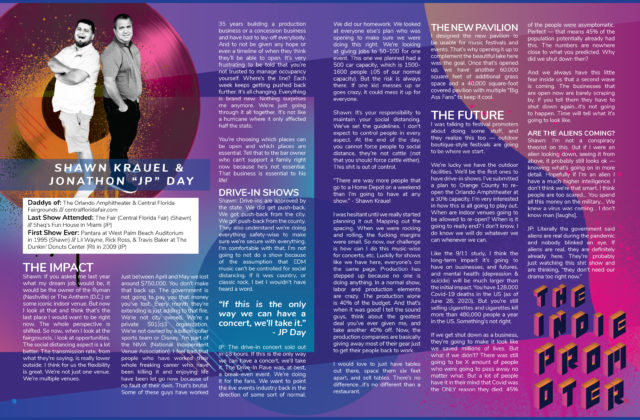 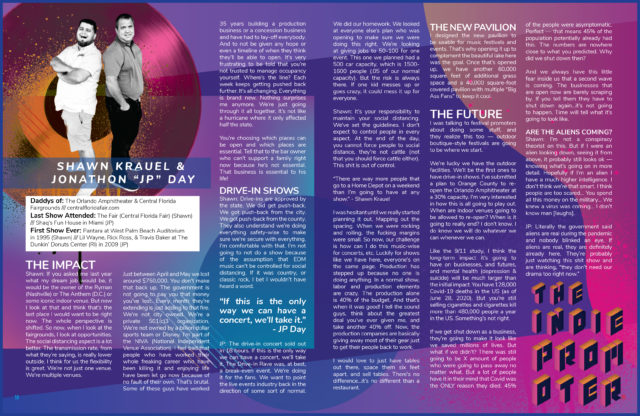 Shawn: If you asked me last year what my dream job would be, it would be the owner of the Ryman (Nashville) or The Anthem (D.C.) or some iconic indoor venue. But now I look at that and think that’s the last place I would want to be right now. The whole perspective is shifted. So now, when I look at the fairgrounds, I look at opportunities. The social distancing aspect is a lot better. The transmission rate, from what they’re saying, is really lower outside. I think for us the flexibility is great. We’re not just one venue. We’re multiple venues.

Just between April and May we lost around $750,000. You don’t make that back up. The government is not going to pay you that money you’ve lost. Every month they’re extending is just adding to that fire. We’re not city owned.  We’re a private 501(c)3 organization. We’re not owned by a billion dollar sports team or Disney. I’m part of the NIVA (National Independent Venue Association). I feel bad that people who have  worked their whole freaking career who have been killing it and enjoying life have been let go now because of no fault of their own. That’s brutal. Some of these guys have worked 35 years building a production business or a concession business and have had to lay-off everybody. And to not be given any hope or even a timeline of when they think they’ll be able to open. It’s very frustrating to be told that you’re not trusted to manage occupancy yourself. Where’s the line? Each week keeps getting pushed back further. It’s all changing. Everything is brand new. Nothing surprises me anymore. We’re just going through it all together. It’s not like a hurricane where it only affected half the state.

You’re choosing which places can be open and which places are essential. Tell that to the bar owner who can’t support a family right now because he’s not essential. That business is essential to his life!

Shawn: Drive-ins are approved by the state. We did get push-back. We got push-back from the city. We got push-back from the county. They also understand we’re doing everything safety-wise to make sure we’re secure with everything. I’m comfortable with that. I’m not going to not do a show because of the assumption that EDM music can’t be controlled for social distancing. If it was country, or classic rock, I bet I wouldn’t have heard a word.

JP: The drive-in concert sold out in 18 hours. If this is the only way we can have a concert, we’ll take it. The Drive-In Rave was, at best, a break-even event. We’re doing it for the fans. We want to point the live events industry back in the direction of some sort of  normal.

We did our homework. We looked at everyone else’s plan who was opening to make sure we were doing this right. We’re looking at giving jobs to 50–100 for one event. This one we planned had a 500 car capacity, which is 1500-1600 people (.05 of our normal capacity). But the risk is always there. If one kid messes up or goes crazy, it could mess it up for everyone.

Shawn: It’s your responsibility to maintain your social distancing. We’ve set the guidelines. I don’t expect to control people in every aspect. At the end of the day, you cannot force people to social  distance, they’re not cattle (not that you should force cattle either). This shit is out of control.

“There are way more people that go to a Home Depot on a weekend than I’m going to have at any  show.” – Shawn Krauel

I was hesitant until we really started planning it out. Mapping out the spacing. When we were rocking and rolling, the fucking margins were small. So now, our challenge is how can I do this music-wise for concerts, etc. Luckily for shows like we have here, everyone’s on the same page. Production has stepped up because no one is doing anything. In a normal show, labor and production elements are crazy. The production alone is 40% of the budget. And that’s when it was good! I tell the sound guys, think about the greatest deal you’ve ever given me, and take another 40% off. Now, the production companies are basically giving away most of their gear just to get their people back to work. I would love to just have tables out there, space them six feet apart, and sell tables. There’s no difference…it’s no different than a restaurant.

I designed the new pavilion to be usable for music festivals and events. That’s why opening it up to complement the beautiful lake here was the goal. Once that’s opened up, we have another 60,000 square feet of additional grass space and a 40,000 square-foot covered pavilion with multiple “Big Ass Fans” to keep it cool.

I was talking to festival promoters about doing some stuff, and they realize this too — outdoor boutique-style festivals are going to be where we start. We’re lucky we have the outdoor facilities. We’ll be the first ones to have drive-in shows. I’ve submitted a plan to Orange County to reopen the Orlando Amphitheater at a 30% capacity. I’m very interested in how this is all going to play out. When are indoor venues going to be allowed to re-open? When is it going to really end? I don’t know. I do know we will do whatever we can whenever we can.

Like the 9/11 study, I think the long-term impact it’s going to have on businesses, and futures, and mental health (depression & suicide) will be much larger than the initial impact. You have 128,000 Covid-19 deaths in the US (as of June 28, 2020). But you’re still selling cigarettes and cigarettes kill more than 480,000 people a year in the US. Something’s not right. If we get shut down as a business, they’re going to make it look like we saved millions of lives. But what if we didn’t? There was still going to be X amount of people who were going to pass away no matter what. But a lot of people have it in their mind that Covid was the ONLY reason they died. 45% of the people were asymptomatic. Perfect — that means 45% of the population potentially already had this. The numbers are nowhere close to what you predicted. Why did we shut down then? And we always have this little fear inside us that a second wave is coming. The businesses that are open now are barely scraping by. If you tell them they have to shut down again…it’s not going to happen. Time will tell what it’s going to look like.

Shawn: I’m not a conspiracy theorist on this. But if I were an alien looking down, seeing it from above, it probably still looks ok — knowing what’s going on in more detail. Hopefully if I’m an alien I have a much higher intelligence. I don’t think we’re that smart. I think people are too scared… You spend all this money on the military… We knew a virus was coming… I don’t know man [laughs].

JP: Literally the government said aliens are real during the pandemic and nobody blinked an eye. If aliens are real, they are definitely already here. They’re probably just watching this shit show and are thinking, “they don’t need our drama too right now.”