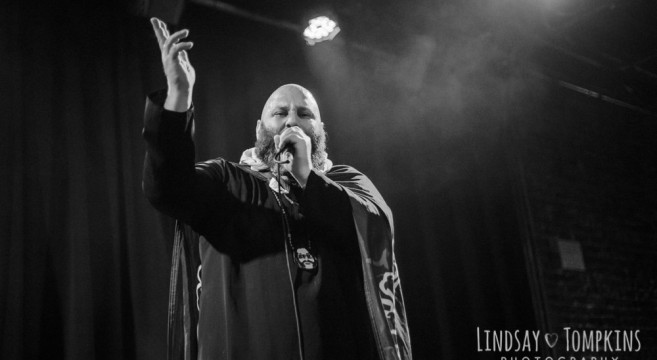 About a dozen years ago, I was the door girl at Backbooth under its original ownership. I was grateful to have a fun gig but with anything you do five days a week, you get into a routine: push the podium outside and hold your breathe as you unroll a grime covered extension cord for the register. Pick up cash from behind the bar and rewrite the guest list into your own handwriting. For the rest of the night, sit still, give away wristbands, and keep a close eye on counts until you repeat the steps from the beginning of the night in reverse order. You’re in, you’re out, life goes on.

One particular night, I broke protocol because I couldn’t sit still, and was being pulled into the show inside. On stage was Sage Francis, a rapper but he is more than that, backed by Gruvis Malt, a too-cool-groove-jazz band. Together, they created an experience that swirled my feelings into a blender, poured them into a coffer, and stored them in my brain like a crucial ingredient to a magic potion. It was a significant live music moment for me, and has lead me on a quest to see Sage Francis whenever I can.

Over the years, I’ve seen him stand on a folding chair, shout-rapping to a crowd with no mic or sound system because the power was out at the venue. Another time, I have a distinct memory of a Sage Francis shouting to a coffee shop in Manhattan for a CMJ performance, and in all other variations of his close-shave to lost-in-the-wilderness-beard that he’s had in between over the years. What is consistent: the fire in his eyes and the fierce determination to keep going, keep performing, promoting, driving, and not dying.

(A breakdown on Sage Francis that skips 5,839 steps: Miami born and Providence residing, poetry slam professional. He started the record label Strange Famous to promote his early mixtapes that now supports its own respectable roster, Scribble Jam emcee champ in 2000 and so many other accolades. He signed to traditionally punk record label Epitaph for a few releases, tours and tours and tours. Revered.)

Sage Francis brought his signature combination of power, passion, and performance poetry to a headlining show at the Social in Orlando on April 23rd. I’m just one fan with a URL to say this, but to me, Sage Francis is a poet that has the gusto to knock you off balance like a left-right-hook-combo. The subject matter will catch you off guard causing you to stumble a bit and the delivery is so fierce that you’ll reach out for anything to confirm your life is real because he is not your archetypal rapper.

Tonight, Sage Francis was a solo act. He was wearing a holy habit (think nun tunic) jacket, a large flag with a Strange Famous logo that’s a stamp of his head, a white scarf, a chain with bling shaped to the likeness of his face, and heavy boots. And for purposes of the Sage Francis Face & Hair Timeline: clean shaven and a big ass beard (Like!). He immediately ripped into “Escape Artist” that has the best call and response of any song.

You get that? When the call is for “hip” you don’t say “hop” because Sage Francis is not the status quo, he sees the world on a different plane and it’s what keeps us enthralled. Of course, his lyrics get deeper. For example in the third song of the night, “Vonnegut Busy,” it covers foreign policy (“They said the war was over, but we know it wasn’t / They wanted more soldiers so we said “sure, fuck it” / Here’s a fresh batch of people with setbacks“), a rigged financial system (“Gotta buy buy buy to stay alive, they punish the payment delayed / Then they charge you for the low balance then they ask “why didn’t you save?“), and finally inspiration (“When it feels like you’re going through hell, keep going / And as they say may the bridges that we burn light the way“).

Sage Francis stomped through his set, theatrically rallying the full room that reached the depth of his discography from “Makeshift Patriot” (his response to 9/11) to “The Best of Times” off Li[f]e. He only took a couple of brief breaks, one to reminisce on his friendship with openers and local heroes, Solillaquists of Sound, whom Sage Francis took on tour ten years ago in support of his record, A Healthy Distrust. Later, he took another break and told the crowd

He went on to explain that health issues were a concern and his doctor advised against performing for 75 minutes straight. So as he gulped back a quick breath, he remarked, “…I’m definitely not dying tonight.” Sage Francis can’t die because he kills it every time he’s behind the mic.

Something that set this night apart was when they announced the quartet was expecting a fifth member (via pregnancy) so big congrats to them! Although each member contributes equally to the fervor that becomes a Solilla show, when Alexandra began to sing in French in an octave she only has the keys to, it was so beautiful that it transported me to a dream-like setting where color was hyper-saturated, and the air was lit by the golden hour. (It made me think of the film Amelie, but that doesn’t have beats, rapping, or dual harmonies that makes you throw your hands up.) If I’ve seen the group 20 times. They given it their all each time. They’re always there to impress, and for that, I thank them.