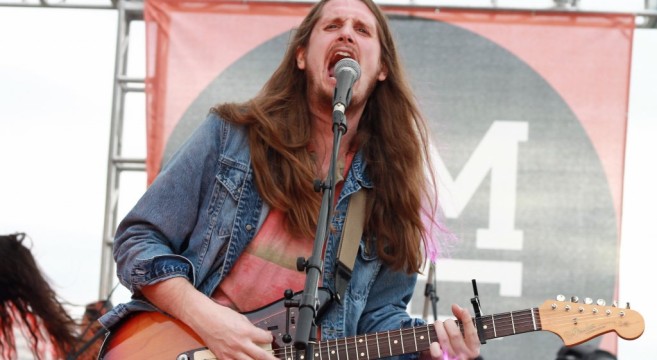 Roadkill Ghost Choir’s mid-afternoon set at Gasparilla Music Festival reminded me of seeing Radiohead ten years ago–the fact that what they are saying is nuanced and gorgeous, but that you would be fine if the lyrics consisted of repeating “yabadabadoo” for an hour. This wasn’t an afternoon with the Flinstones. It was a festival-stealing show from a band that got their start just down the street in often-overlooked Deland.

Deland is a town that embodies the duality of the South- barefoot, dirt-road stereotypes collide with academic, college town pastimes. Places like The Abbey – a somewhat highbrow craft beer bar – coexist with seedy strip clubs, lending credence to the cliche that first impressions can be entirely misleading and are often downright destructive.

Out of that complicated setting was born Roadkill Ghost Choir. A band who rose to play the likes of Letterman, yet whose name still draws a request for repetition when mentioned to even more-than-casual music fans. They are often ascribed the labels of Folk or Americana, but this is an outfit that owes as much to Nirvana and early Radiohead as it does Dylan and Johnny Cash.

Grunge guitar melded with pedal steel honky-tonk throughout the hour set at Gasparilla Music Festival 2015, with lead singer Andrew Sheppard’s guttural groan hitting us like that moment when Thom Yorke or Justin Vernon lets loose to shoot from buttery smooth to boner-inducingly powerful.

The show fittingly ended with a cover of Nirvana’s “Breed,” and the most self-aware mosh pit ever broke out center stage. Festival goers politely bouncing off of each other, almost catching fellow revelers and apologizing for stepping on toes. Such was the set- some folks “moshing” to one side, others lost in a trance and hanging on every lyric.

I misheard the beginning of “Lazarus, You’ve Been Dreaming” to say “Two faggots in the garden.” In that moment, and in the context of the rest of the lyrics, it sounded like a middle finger to self-righteous religiosity, and I loved it.

Turns out the lyric is “Defiance in the garden”– and the song is powerful as it was designed. No matter. You may hear Radiohead. Your buddy may find them more Nirvana. Your father may want them to sound more like Johnny Cash. Those are all correct, and they’re all oh so wrong. Roadkill Ghost Choir stood on their own among giants like Modest Mouse and The Gaslight Anthem at an incredible Gasparilla Music Festival 2015, regardless of how the 10,000 in attendance individually experienced their hard to pin down sound.