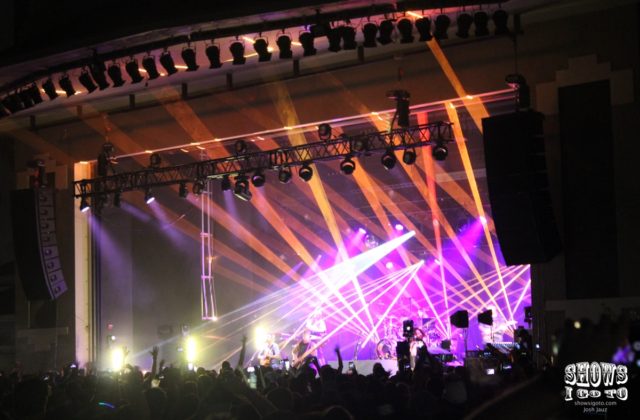 I have a lot of emotional investment in this show. Although I’ve been a Rebelution fan for many years now, and while it was my fourth time seeing them live, it’s my first time reviewing them and my first official photo shoot. I drove from Orlando to Boca Raton to do it, which worked out, because for me, their music is de-stress.

Sunset Cove Amphitheatre was crowded on the evening of June 23rd, 2018. There were several thousand people all attuned to the same musical vibration which emanated from the band instantly upon walking on stage. It helps a lot when the band members are actually smiling and sincerely happy to be doing what they do.  As they made their way through the early part of their set, the crowd emotionally hugged them back and returned the love the way they should: by dancing and singing along to the songs. 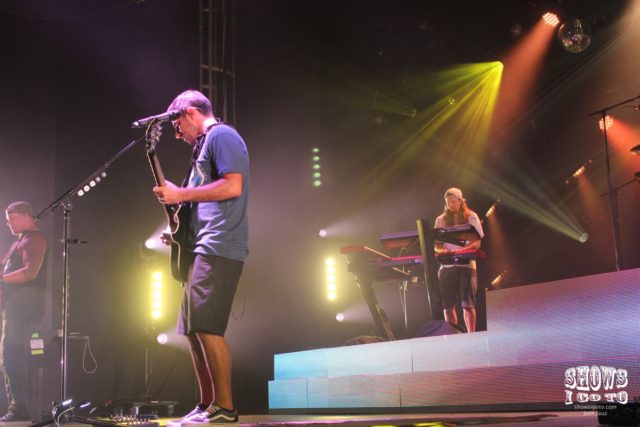 A big part of what creates the unmistakable mojo of Rebelution shows is that everyone knows the music.  Everyone sings along to the songs. Everyone dances. Some people are more enthusiastic and uninhibited than others, of course, but participation in the experience is a given across the demographic board. Adults, kids, men, and women in all shapes and sizes; none of that is relevant when they play cult hits like “Roots Reggae Music,” “So High,” and “Inhale, Exhale.”

It’s common for frontman Eric Rachmany to drop out during these songs to let the crowd sing. Marley Williams’ bass lines combined with drummer Wesley Finley’s drumming are guaranteed to get errybody shakin’ it. Rory Carey’s keyboard adds a layer of ear candy which soothes and entices. This creates musical space for their touring brass players to fill up with the distinguishable reggae hooks that can only come from a brass accompaniment. 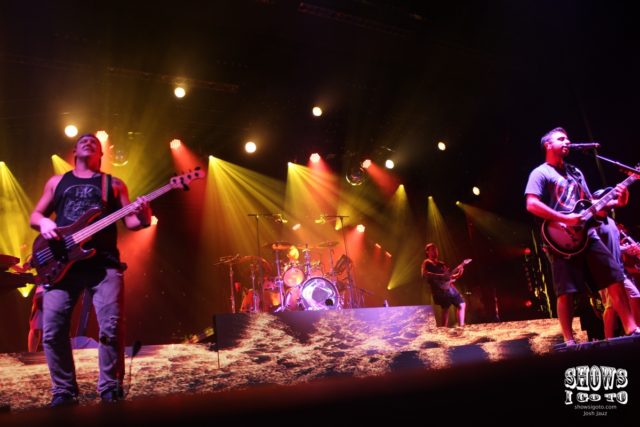 None of this is a surprise to fans. The band’s 11 year existence since forming at The University of California, Santa Barbara has been filled with borderline unparalleled success in the modern era.  While currently touring to support their latest full-length release, Free Rein, (the band’s seventh studio album,) several of their prior albums have occupied the number one spot on the Billboard Reggae charts. Bright Side of Life took the number three spot for all genres, and with good reason. The music is well-arranged, mature, and carries positive messages. It’s encouraging to see a band release their own albums and sell tons of them, all while making a concerted effort to release great, uplifting music.

Case in point. Feeling down? Listen to the song “Sky Is the Limit.” I guarantee you’ll feel better.

During their encore set, the band played one of my favorites from the new record, “Legend.” I really dig this track, and the live representation was not disappointing. This song is a little darker and has a more biting tone.

The hook of the chorus is so well-barbed that it burrows its way into your consciousness and lives there, at the forefront, for several days at a time.”

They played a slightly longer, more extended version of the song, which for me, really ended the evening on a high point.

The last time I saw Rebelution was in February of 2017 at One Love Cali Reggae Fest in Long Beach, where their set was the highlight of the festival for me, (along with The Wailers playing Exodus at sunset on the final day).

Every time I see them live I feel like I enjoy them even more. There’s a strong argument to be made for the talent of a band that continues to get better over time and can release album after album of material that’s just as enjoyable as anything they’ve put out before it.