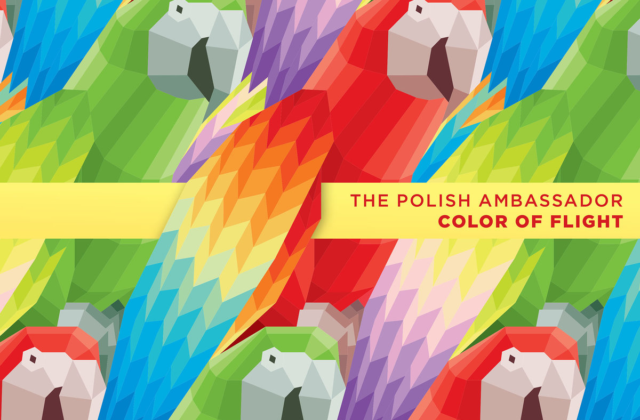 The Polish Ambassador (real name David Sugalski) has been around the block. Touring for the last ten years, headlining shows and even festivals, this funkateer has himself and America dancing their hearts out! Known for his early glitchy tracks and later more earthy, ambient feels, this amazing DJ has had a hit in every department. His new album, Color of Flight, is a perfect conglomeration of the classics and the new sounds from this eclectic artist. “My intention with this record was to bridge an older era of Polish Ambassador music that many of you fell in love with, with more recent sounds that have helped to expand the TPA audience,” he recently stated when releasing the new album. Seventeen albums and counting for this jumpsuit-wearin’, Swiss army knife of a next level musical mixologist, and the good feels just keeps on coming. Color of Flight‘s thirteen tracks and over an hour of music keep you dancing on what I can only describe as being on a digital safari. Colorful and natural sounding, the album still has high paced beats and glitchy riffs to keep older fans interested.

“Punjab Shuffle” quickly became my favorite track, making it onto all my playlists for parties and driving. This tune is four minutes of progressive beats made by the jungle creatures themselves.

Other quick favorites are “All Night Long,” “Return,” and “Dark Between Stars.” The last stylish track of the release is “Turtlebird,” which features a heavy bass line and a riff that sounds a bit like turtle doves cooing in the background.

Overall, this is the best album I have heard from The Polish Ambassador in years! A great marriage between the old glitch sound and his new love for organic and smooth vibes. As a die-hard TPA fan, I am thrilled with this new work and can’t wait to see him again LIVE!!! The last time I saw him live was at Purple Hatters Ball 2016 at the Suwannee Music Park in Live Oak, FL. Check out the full set video, courtesy of SIGT’s own The Sober Goat!